The Vatican expelled me for supporting female priests

I left Catholic priesthood after 40 years. My only regret is waiting so long 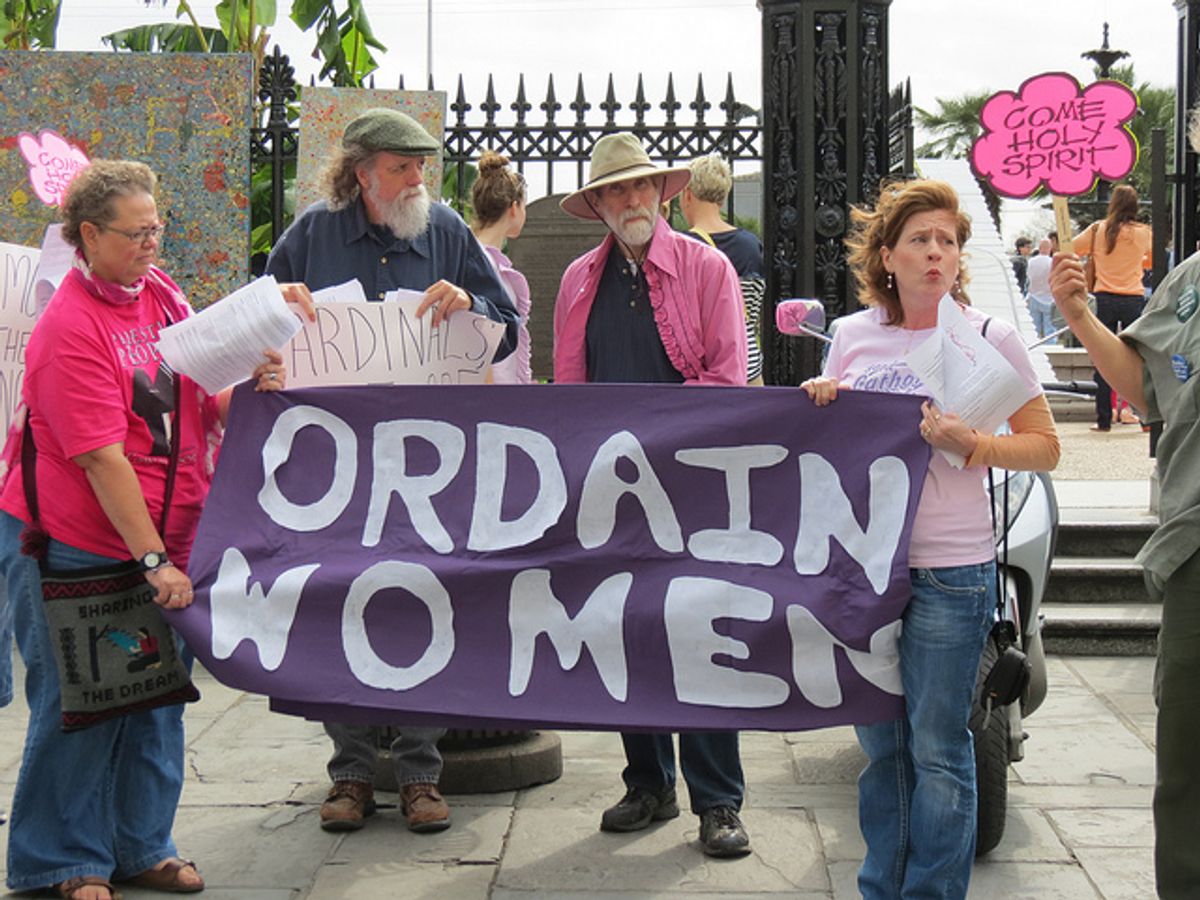 On the ordination of women, the Church has spoken and said no. Pope John Paul II, in a definitive formulation, said that door is closed. –Pope Francis I, July 29, 2013

Boom. This is the same old same old theology—the Virgin Mary is more important than anyone else in the story, but living women cannot make ecclesial decisions, exercise sacramental ministry, or make ethical choices. Apparently, the question of women’s ordination is so yesterday in the Vatican Francis doesn’t think it needs to be revisited. –Mary Hunt, RD

Growing up in a small town in Louisiana, I went to segregated public schools for twelve years. Even our little Catholic church was segregated, with the last five pews reserved for the black members.

I graduated from high school in 1956. Looking back, I cannot remember one white person in our town who had the courage to say: "We have a problem here, and it is called racism." What I do remember are the mantras: "Segregation is our tradition" and "Blacks are separate but equal."

I studied geology in college with the hope of getting rich in the oil fields of Texas, but as a patriotic graduate I joined the military, my ticket out of Louisiana and an opportunity to explore the world. In my fourth year, having become a naval officer, I volunteered for shore duty in Vietnam which would become a turning point in my life.

Never had I experienced such violence, suffering, and fear. In the madness of war, my faith became more important and I felt God was calling me to be a priest. I talked to a Catholic Army chaplain about my calling, and he recommended that I join the Maryknoll Missionary Order who worked with the poor around the world.

I was ordained a Catholic priest in 1972 and assigned to Maryknoll's mission work in Bolivia. A slum on the outskirts of La Paz became my home for the next five years; the poor taught me about their "theology of liberation" and a God who empowers and gives hope to the poor. This theology teaches about a loving God who does not want anyone to suffer from poverty, oppression, violence, or discrimination.

They also introduced me to the importance and meaning of the word "solidarity" in the faith community. In Bolivia, it meant "to accompany" and "to walk with." To be in solidarity means to make another’s struggle for justice, peace, and equality your struggle.

People who are exploited, who see their children go to bed hungry and die before their time, cry out for justice and organize in solidarity with each other. As a result, many were killed and imprisoned. During my fifth year I was among the many arrested by the military and I was forced to leave the country.

I then turned my attention to El Salvador where, on March 24, 1980, Archbishop Oscar Romero was assassinated because of his defense of the poor. Months later, four U.S. churchwomen working with the poor were raped and killed by the Salvadoran military. Two of the women, Maryknoll Sisters Maura Clarke and Ita Ford, were friends of mine. The other two women were Ursuline Sister Dorothy Kazel and lay missioner Jean Donovan.

On November 16, 1989, six Jesuit priests, their housekeeper, and her 15-year-old daughter were massacred by the Salvadoran military. When U.S. congressional leaders announced that those responsible for the slayings had been trained at the U.S. Army School of the Americas (SOA) at Fort Benning, Georgia, I and a small group of friends returned to Georgia to investigate the SOA. In 1990, the SOA Watch was born.

When the United Nations reported that those who had killed Bishop Romero and the four U.S. churchwomen, in addition to the six Jesuits and countless others, had been trained at the SOA, and when major newspapers in the United States reported on the torture manuals they used, thousands joined our movement to close the School.

It was in giving hundreds of talks about the SOA at churches and colleges that I met many devout women in the Catholic Church who told me about their call by God to the priesthood. These women had been rejected because the Catholic Church teaches that only baptized men can be ordained. This brought back memories of the segregated school I attended and our little Catholic church. I was silent about this sin of racism though I have since learned that when there is an injustice, silence is the voice of complicity.

In 2000, I was invited to speak at a large religious conference in Rome about the SOA and U.S. foreign policy in Latin America. Hundreds of priests and nuns attended and were supportive of our efforts to close the SOA. The day before returning to the United States, I was invited by Vatican Radio to do a 15-minute live interview about the SOA and U.S. foreign policy.

With two minutes left and moved by the spirit, I recognized an opportunity to express my solidarity with women in the Church, so I said, "We have been discussing the injustice of U.S. foreign policy in Latin America. As a Catholic priest, I want to say that there will never be justice in our Church until women can be ordained."

I had about another minute remaining and wanted to say a little more about women priests, but the manager of Vatican Radio angrily came in, cut me off the air, and started playing church music. The interview was over—but I slept very well that night knowing I hadn’t let a sacred moment pass by in silence.

From that point on in my talks about the injustice of the School of the Americas toward Latin America, I also addressed this injustice closer to home. I began to ask publicly the following questions: Why wouldn’t women, like men, be called to be priests? Don’t Catholics profess that men and women are created of equal worth and dignity? Don’t the Holy Scriptures state clearly that “There is neither male nor female. In Christ you are one” (Galatians 3:28)? Don’t priests profess that the call to be a priest is a gift and comes from God? And the all-important question I asked myself and fellow priests was this: Who are we, as men, to say that our call from God is authentic, but God’s call to women is not?

In asking these questions I saw clearly that our Church’s teaching that excludes women from ordination is rooted in sexism. Sexism, like racism, is a sin. And no matter how hard we may try to justify discrimination against others, in the end, it is never the way of our all-loving God who created us all equal.

I wrote the Vatican saying that my conscience would not allow me to recant. I stated that our conscience is sacred because it always urges us to do what is right, what is just. In essence, I said, you are telling me to lie and tell you that I do not believe that God created men and women of equal worth and dignity and calls both to be priests. This I cannot do; therefore I will not recant.

I continued to follow my conscience and went about my ministry calling for the closing of the SOA and for the ordination of women. In October of 2011, I joined an international delegation of women’s ordination leaders going to the Vatican. We met with Church leaders, delivering a petition signed by 15,000 supporters of women’s ordination. We showed the documentary film Pink Smoke Over the Vatican at a nearby theater, and we maintained a vigil in St. Peter’s Square, holding banners that said: “ORDAIN CATHOLIC WOMEN” and “GOD IS CALLING WOMEN TO BE PRIESTS.” Three from our delegation were removed from St. Peter’s Square by Rome police; we were detained for three hours and our banners were confiscated. Once again, it was all about solidarity.

It was only when I began expressing my solidarity with women in the Church, that I recognized how deeply sexism and power permeate the priesthood. Somehow we have lost our way, forgotten the teachings of Jesus, and evolved into a very powerful and privileged clerical culture. It saddens me that so many of my fellow priests see women as a threat to their power. As men, we claim that we, and we alone, can interpret the Holy Scriptures and know the will of God. We profess that men and women are created in the image and likeness of God, but as men we have created God in our own image. And this God is very small, very male, and sees women as the lesser of men.

On November 19, 2012, I was notified by Maryknoll that the Vatican had expelled me from my Maryknoll community of 46 years and the priesthood. This is very difficult and painful. I’m aware, however, that the rejection I feel is but a glimpse and a fraction of the rejection women have experienced in the Catholic Church for centuries.

I notified the Vatican and the leaders of Maryknoll that they can dismiss me, but they cannot dismiss the issue of gender equality in the Catholic Church. The demand for gender equality is rooted in God, justice, and dignity, and it will not go away.

As a Catholic priest for 40 years, my only regret is that it took me so long to confront the issue of male power and domination in our Church.