When bluesman T-Model Ford died, so did the dirty blues

The hardscrabble musician and his filthy mouth were our last link to raw, profane blues of the early 20th century 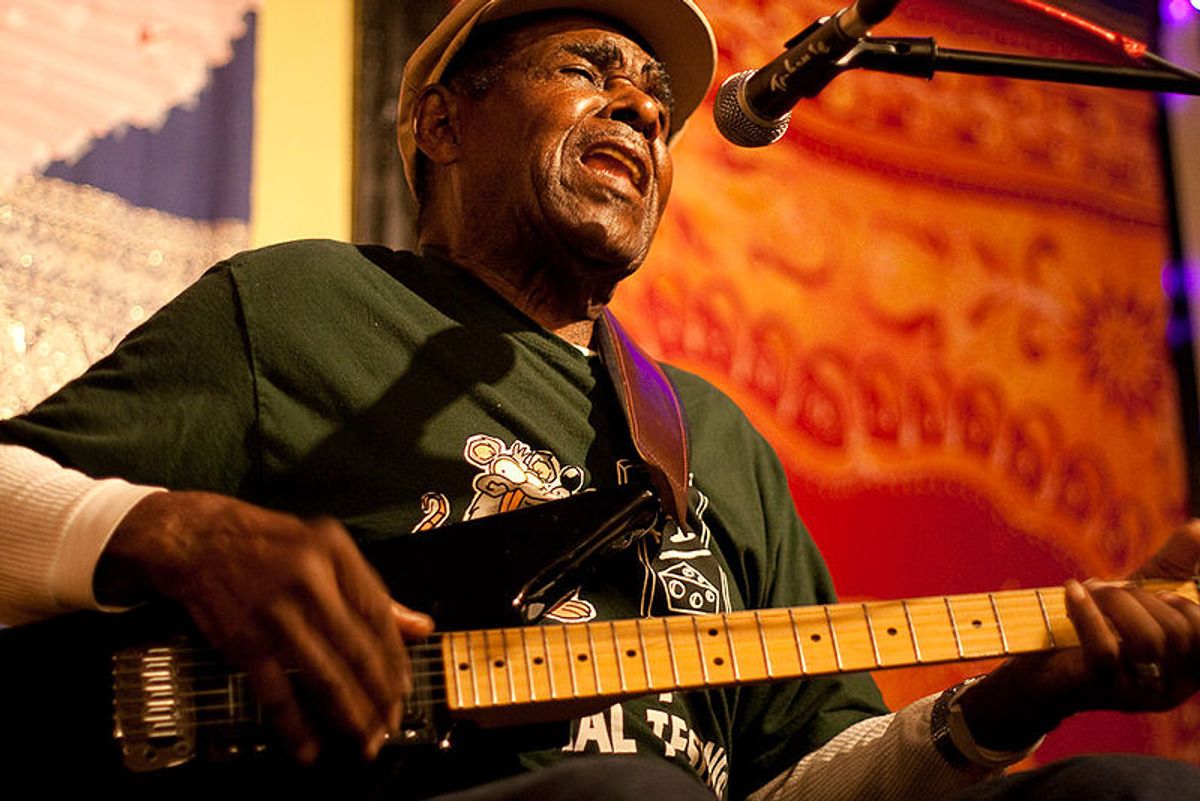 “If hard times and suffering qualify a man to sing the blues, then T-Model Ford can be said to be overqualified.”  -Jay McInerney

TONIGHT, THE AFTERLIFE is getting its ass kicked; its women have been bedded and its whiskey has disappeared by the gallon.

Because, tonight, T-Model Ford is dead.

It’s surprising how little attention T-Model Ford’s recent passing has been given. It’s not entirely shocking, though. During his career the roughshod Greenville, MS bluesman was considered by most as nothing more than a kind of profane, violent novelty act. Ford had a hard time achieving the blues royalty status of his Fat Possum labelmates Junior Kimbrough or R.L. Burnside.

That is a shame.

The juvenile delinquent inside me was initially drawn to T-Model’s rougher-than-rough legend and the sound of an angry grandpa threatening to hurt me and/or steal my woman. For many years that was enough to sustain my attention and, most likely, his fanbase. But with his death, I have begun to realize Ford was more of an unshaven torch carrier of the blues. T-Model Ford and that filthy mouth were the last direct link we had to the raw, profane blues of the 1920s, Thirties and Forties.

Famously, Fat Possum owner Matthew Johnson offered Ford a record contract after hearing him sing about wanting to break a man’s arm. Ford was 93 when he passed away on July 16. Or 89. Nobody—not even T-Model himself—was certain when he was born. He went to prison and worked on a chain gang for killing a man at age eighteen. Obituaries claim Ford fathered a Screamin’ Jay Hawkins-esque 26 children. He actually never picked up a guitar until he was in his late fifties, after his fourth or fifth wife left him—T-Model was not sure which. Ford recorded seven records during the remaining decade-and-a-half of his life.

A curious thing happened during that brief career. If you dig deep enough you find a video of T-Model picking a friendlier, smoother blues. It was 1993, and he was the bluesman he thought the money-paying world wanted to see: a sharp dresser holding a semi-decent guitar with licks to match. This clip finds Ford working through a mellow, traditional tune like, “Freight Train Blues.”

It’s not hard to sense how uninspired it all seems.

Sure, maybe T-Model dressed up special for the interview, and maybe he was nervous in front of the camera. But it’s probably safe to say T-Model Ford, the brawler, womanizer and braggart, never had a nervous moment in his life.

Fast forward to 1997 when his first album was released. This was not the same T-Model Ford. Here was a man who looked freshly peeled from the gutter, voice gone gristly, Peavy guitar and playing style equally beat to shit. But the biggest difference is the conviction of the music. The album, Pee Wee Get My Gun, sounded threatening, raunchy and morally-vacant, much like the hardscrabble Mississippi he inhabited. It’s as if T-Model stopped acting like everyone’s idea of a bluesman and simply became the blues.

The album’s highlight was his ode to ass-kickery, “I’m Insane.”

These were artistic moves that turned T-Model Ford into a genuine artist and choices that would have made his filthy blues forefathers like Bo Carter and Lucille Bogan proud.

T-Model Ford, no matter his actual age, was very likely our last musician to have been directly influenced by the Charley Pattons and Mississippi Fred McDowells of the Delta. Ford was said to be a hellraiser of jukejoints from an early age and likely soaked up this original brood of bluesman’s raunchy, raw sound.

Listeners don’t always associate T-Model’s lyrics, like “I’ll put a foot in your ass, Stella,” with Herbert Hoover-era America, but they should. Yes, most pre-WWII blues records were filled with soap-scrubbed innuendos about squeezing lemons and sugar bowls being empty. But in all likelihood, those tunes were polished up for record companies from raunchier versions played to late-night crowds. The blues were, after all, the devil’s music. Anyone thinking juke joints weren’t filled with T-Model levels of profanity need look no further than doo wop legends, the Clovers. While they peaked long after the blues boom, the future stars of “Love Potion Number Nine” fame once cut this filthy track.

And then cleaned it up to the more radio friendly “Darktown Strutter’s Ball.” It’s not difficult to imagine blues singers doing the same in order to get a record released, like a mafia front with a set of clean books and dirty books. By the time T-Model began cutting records, there was no need to hide the sleaze. There was a need to embrace it.

The Clovers, though, had nothing on the lost dirty blues of Lucille Bogan. Her “Shave ‘Em Dry” was originally cut in 1935 and proves so unbelievably profane she would’ve made a fine duet partner for T-Model.

But in the innuendo department, not even T-Model’s wood cuttin’ could touch Bo Carter. Carter was best known as a member of the famed Mississippi Sheiks. He was also a slinger of so many double entendres, it’s shocking he ever got a record pressed in the 1930s: “Please Warm My Weiner,” “Banana in Your Fruit Bowl,” “My Pencil Won’t Write No More,” among others.

Over the course of almost a hundred years, we went from Bogan boasting of areola magnitude to T-Model boasting of his ass-whooping magnitude. I doubt many people ever compared Ford to the pioneers of blues, but they should start.

Undoubtedly, folks will continue recording filthy blues songs about sex and violence. But, it won’t be worth listening to. It will, no doubt, come off about as inspired and real as a freshly shaven T-Model Ford in a fedora.

Tonight, T-Model Ford is dead and so are the dirty blues.