In the nation's finance capital, a candidate is running on fighting inequality -- and voters are flocking to him 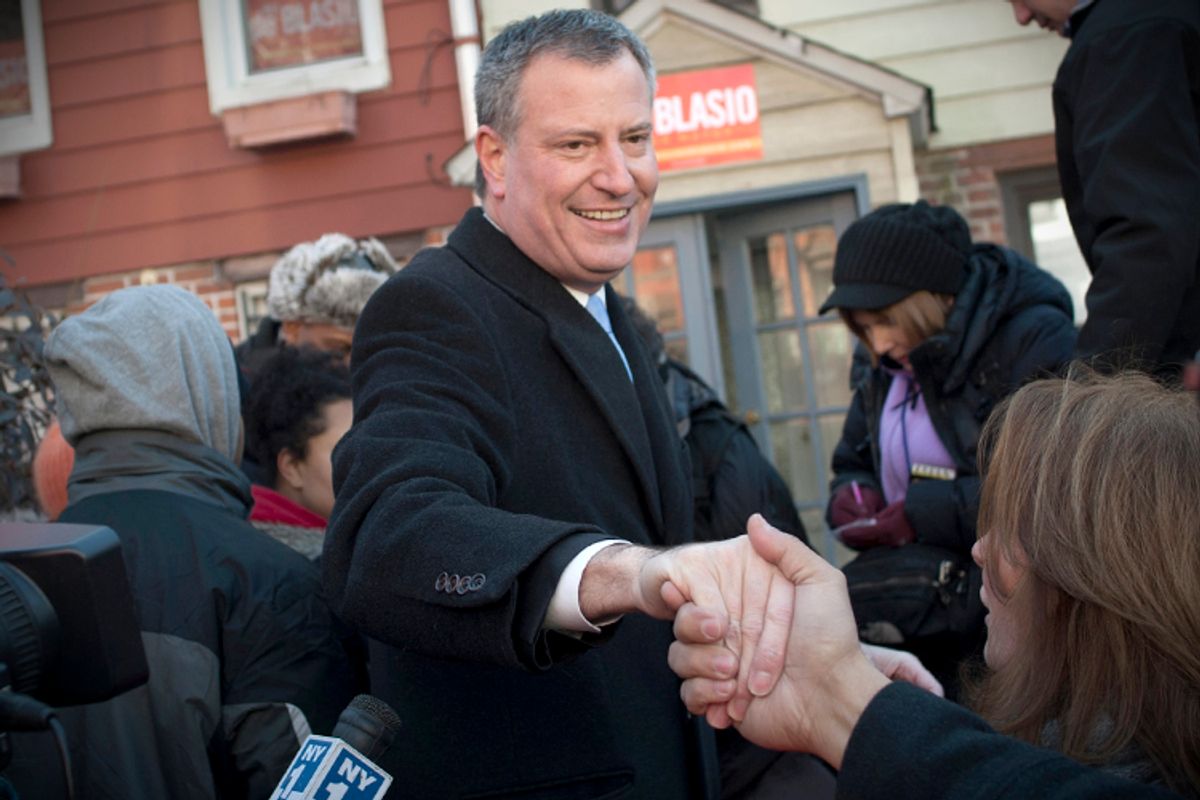 In the same week that has seen Wall Street aristocrats and Silicon Valley tycoons collude to buy the New Jersey U.S. Senate race, there has been the opposite kind of political news just across the Hudson River. In of all places New York City - aka the world capital of international finance - the former no-chance-in-hell candidate Bill de Blasio has leaped to the top of mayoral polls through a campaign advocating activist government initiatives to address economic inequality.

Much of the media commentary about this development has expressed the kind of surprise that suffused the recent New York Times' piece on de Blasio. Labeling his strategy "risky," the Times seemed astonished that de Blasio is "surging into the top tier of the field by talking about decidedly unglamorous topics: neglected hospitals, a swelling poverty rate and a broken prekindergarten system."

An enraged political class seems to be wondering how - how, dear god! - is this is all happening? But the two more pressing questions are 1) Why is anyone at all surprised that this kind of positioning can work? and 2) Why hasn't the critique of economic inequality that de Blasio is evincing been far more prevalent and equally successful in other campaigns throughout the country?

The first question is particularly relevant to the Big Apple. More than any other city, New York epitomizes the truth of Warren Buffett's famous declaration that "There's class warfare, all right - but it's my class, the rich class, that's making war, and we're winning."

The scope of that victory in New York City is breathtaking. According to Census data, New York is America's most economically stratified state and New York City its most economically stratified city. It is a place where the top 1 percent of income earners make an eye-popping 44 percent of the city's total income. That means, as journalist Christopher Ketchum reports, if the city was its own nation, "it would come in as the fifteenth worst among 134 countries ranked by extremes of wealth and poverty."

To achieve those kind of horrifying results, New York City's class war has been a notably intense affair - one marked by "shock and awe" contrasts.

For instance, the Big Apple is a place where the elite media publicly complain that it is tough to get by on $500,000 a year and where the rich have elevated apartments for their cars - all while 46 percent of city residents are below or near the poverty line. It is a place where a billionaire mayor who has overseen a spike in poverty nonetheless defends Wall Streeters, justifies police actions disproportionately aimed at the poor and issues one-way tickets designed to permanently exile homeless people. It is a place where that same mayor fights initiatives to mandate paid sick leave and to force city-subsidized companies to pay better wages - and then jets off to his estate in Bermuda where, according to the Times, "he is a fixture, dining out with lawmakers, cruising its streets in his golf cart and hosting small parties at his house."

As this Dickensian tragedy has unfolded, New York City's aristocracy has - predictably - marshaled its power to try to suppress any kind of class-based politics from emerging.

In the electoral arena, that aristocracy has responded to the down-ballot success of the Working Families Party with an effort to bury the party in expensive lawsuits. At City Hall, Bloomberg boasted of having "my own army" in the New York Police Department - and he has deployed that army to forcibly crush protests against wealth inequality. Meanwhile, in the press, local media barons like Mort Zuckerman and Rupert Murdoch used their papers to cheer those police actions on - all while devoting column inches to downplaying the very existence of poverty and railing on even the most modest initiatives to address inequality.

Such a coordinated attempt to suppress class-based politics can certainly be successful in economic boom times (recall the 1990s, for instance). It can also scare many New York politicians into avoiding class-based politics for fear of being targeted for electoral elimination by the rich. Indeed, for quite a while, New York has been a place where the elite has happily screamed "let them eat cake" - and yet no basic political reform has followed, much less any kind of full-on revolution.

But, in recent years, the human toll of inequality in New York City has intensified to the point where it can no longer be hidden from view. It can be seen in everything from poverty data to rent levels to disaster relief. In light of that, what's surprising about de Blasio's class-based theme is that it has apparently only become an electoral boost toward the end of this current mayoral race - and not sooner, or in an earlier mayoral race.

Of course, better late than never, right? After all, at least de Blasio's surge suggests some rudimentary form of class-based analysis is at long last taking root in New York City at the highest levels of municipal politics.

What's striking, though, is that - save for rare exceptions like Elizabeth Warren's U.S. Senate race - the same cannot necessarily be said for much of America, which gets to that second question: why not?

This is a critical query because New York is hardly the only place afflicted by rampant economic inequality. Sure, New York may be the most unequal city and state in America, but America as a whole is one of the most economically stratified nations in the industrialized world, and its inequality is even surpassing many nations in Latin America - a region that has been notoriously divided between haves and have-nots. So why hasn't the same economic populism fueling de Blasio in the capital of capital fueled other candidates in locales that should be less beholden to moneyed politics?

Part of the answer may be in the aforementioned efforts by the aristocracy. Just as it has - before now - succeeded in suppressing class-based politics in New York City, the nexus of money, media and political power shapes national and local elections throughout the country. And even though those locales may be geographically far away from all the financial, media and political power anchored in New York City - that financial power, to say the least, has nationwide reach.

However, according to a revealing study, another less obvious part of the answer can be found in the success of conservatives' crusade to not just deemphasize inequality as a political issue, but to also demonize government.

In an expansive survey of 5,000 Americans, researchers at Harvard, Berkeley, Columbia and MIT found that while the vast majority of voters are aware of rising inequality and are concerned about it, their willingness to turn that awareness and those feelings into electoral action are inhibited by their antipathy to government. As the researchers recently wrote in the Times (emphasis added)

Whether or not the rise in inequality has itself lowered Americans’ faith in government, the low opinion in which Americans hold their government may well limit their willingness to connect concern with inequality to government action.

Our research suggests that merely talking more about inequality is unlikely to change Americans’ policy preferences. Americans are already aware of inequality and are troubled by it. Proponents of greater redistribution can probably save their breath pointing out that inequality is a problem. Instead, they face what seems to be a much more difficult task: convincing them that their government is up to the task of addressing it.

So basically, the conservative movement's longtime crusade to vilify the very concept of government benefits that movement's other goal of short-circuiting the politics of economic class. Put another way, the right's anti-government crusade has helped to stifle Americans' potential progressive impulse to base their votes on concerns about economic inequality.

No doubt, this reality is - at least in part - why some of the poorest states in the country elect some of the most plutocrat-friendly lawmakers in the entire Congress. It is why in the midst of a boom in inequality it was considered a political gaffe for Barack Obama to even mention the notion of wealth redistribution. It is why a royalist like Bloomberg has been able to hold power in ostensibly liberal New York, even as he has championed an ultraconservative "let them eat cake" economic program. In each of these cases and countless others, we see that voters of all political stripes may despise the stratification of the country, but 30-plus years into the Reagan Revolution, conservative propaganda has convinced many to believe that - facts be damned - such stratification cannot be reduced through politics and government.

This - not the leapfrogging of serial sexter Anthony Weiner - is why de Blasio's campaign is politically important, even beyond New York City. Though it is not at all surprising for a candidate like him to generally criticize inequality, it is newsworthy that he is succeeding by coupling that criticism with specific public policy proposals to combat such inequality. And not just the typical aristocracy-appeasing "public-private partnership" tripe, but government-based populist initiatives that the Times notes have "alarmed many business leaders and Bloomberg aides."

Slamming Bloomberg for being a "free marketeer," de Blasio proposes, for instance, to raise income taxes on those making over $500,000, reduce the city's huge corporate subsidies and use the reclaimed resources to finance universal pre-kindergarten. He also backs using the city's financial leverage to force municipal contractors to pay living wages, and he proposes to rein in the stop-and-frisk program that in practice persecutes New Yorkers for the alleged crime of not being white and/or rich.

In sum, he is not just running on a gauzy rhetorical criticism of inequality, he is running on explicit proposals to use the power of government to combat that inequality. In the process, he is openly challenging the anti-government ideology that has been one of the biggest obstacle to making such an economic critique a voting-booth issue.

Sure, it is not at all clear that a Mayor de Blasio would follow through and turn those campaign themes into public policy. But the fact that his campaign is premised on those themes - and is now proving itself politically viable - is significant unto itself. It signals to other aspiring politicians that there is a similarly viable political coalition to be built on proposals to use government to fight inequality.

Of course, de Blasio may not end up victorious. But with his surge coming only months after Warren's high-profile win on similar themes in Massachusetts, this could be the beginning of a trend whereby aspiring Democratic politicians at least see growing electoral benefits to positioning themselves against both inequality and anti-government sentiment. That would be a welcome change for a party that has all too often avoided the inequality issue to try to appear "cozy with the moneyed class" and to appease America's destructive anti-government zeitgeist.