Chris Farley's friends remember: "His greatest love was just the act of laughter itself"

A new oral biography takes on the beloved comic's life, and the self-destructiveness that led to his death 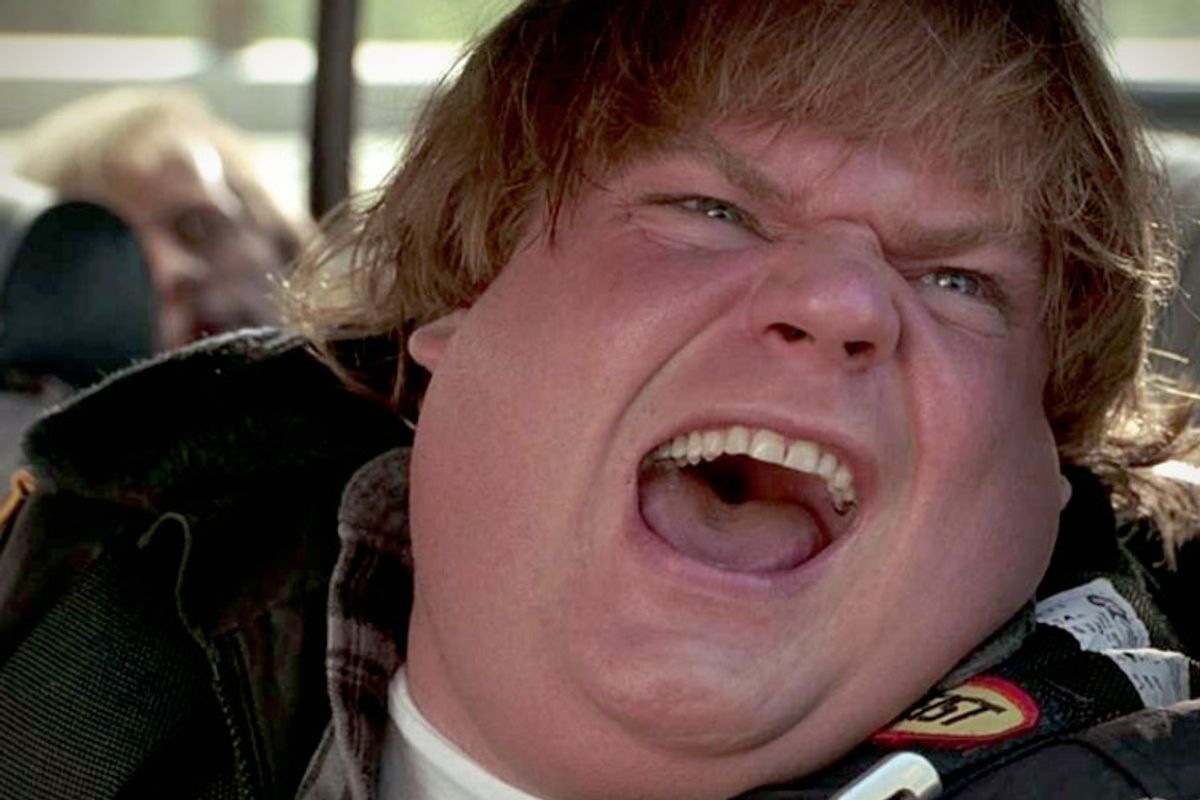 If Chris Farley were still alive, he would be six months from his 50th birthday today. Because he died so young, at age 33, while his movie career was still in its first act, it is impossible to imagine all he might have accomplished beyond the virtuoso “fat guy in a little coat” slapstick for which he is still remembered, most notably from his performances with David Spade in the buddy comedies “Tommy Boy” and “Black Sheep” and his triumphant 1990-1995 run on “Saturday Night Live” alongside Spade, Chris Rock, Adam Sandler and Rob Schneider, a group that would come to be known (and marketed) as “The Bad Boys of SNL.”

But the newly released audiobook edition of “The Chris Farley Show,” an oral biography co-edited by Farley’s brother Tom and journalist Tanner Colby, is full of reminders of how close he had already come to a mid-career breakthrough. For one thing, Dreamworks co-founder Jeffrey Katzenberg had recruited him to voice the lead in “Shrek,” and his performance of the portions of the script he recorded had caused the animators to begin to imagine a “Chris Farley version of the story,” as screenwriter Terry Rossio remembers, a Shrek unlike Mike Myers’ jovial ogre “who has a sense of humor that’s not that good, but it makes him happy.” Farley’s Shrek, instead, “was born of frustration and self-doubt, an internal struggle between the certainty of a good heart and the insecurity of not understanding things.”

For another, David Mamet, the playwright and screenwriter behind “Glengarry Glen Ross” and TV’s “The Unit,” had written for Farley a biopic of the silent-film star Roscoe “Fatty” Arbuckle, a man of massive size and charisma whose career was destroyed by a wrongful accusation of rape and manslaughter of an actress with whom he had spent an evening at a party. As Farley’s brother remembers, when Farley talked about Arbuckle, he said, “This is me. I’m going to tell them about the real Fatty Arbuckle, and maybe they’ll understand the real Chris Farley.”

Other comic actors among Farley’s “Saturday Night Live” cohort later teamed with talented directors and screenwriters who were wise enough to construct characters that deconstructed the public façade of the actors who played them, and showed the darkness that animated what had been previously played for cheap laughs. For Adam Sandler, it happened twice, first in Paul Thomas Anderson’s melodramatic inversion of the stock Sandler character in “Punch-Drunk Love,” and then in Judd Apatow’s close-to-the-bone unpacking of a celebrity comic not entirely unlike Sandler in “Funny People.”

But Farley never got the chance to enjoy the dramatic exploration that seemed so nearly ahead of him. One of his “Tommy Boy” costars, Brian Dennehy, describes the dramatic version of the Farley character as an elucidation of a preexisting “sadness and a vulnerability and a fear that existed in his face and his eyes … a sense that ‘the world can never take away the pain that I feel, pain that I know I have, but that I don’t fully understand.’”

The disappointment that haunts Farley’s friends and family in “The Chris Farley Show,” though, is less about the public loss of Farley the entertainer, and more about the tragedy of losing a beloved person to a self-destructive streak that seemed in many ways to be at odds with the kindheartedness it sat alongside. In his last years, Farley lived hard, and he had such a gift for chasing hard living that he once scored cocaine inside a detox ward. The end arrived after a four-day sleepless crack-and-heroin binge, in the company of a prostitute with whom Farley was having an argument about money.

Around 3 o’clock the morning of Dec. 18, 1997, the woman decided to leave, and when Farley tried to follow her out the door, he collapsed in the floor. She knelt beside him, saw that he was having trouble breathing, stole his watch, took pictures of him, and as she walked away, he said, “Don’t leave me,” his last words.

One of the great pleasures of reading “The Chris Farley Show,” in its original hardcover edition, was hearing, unmediated, the voices of those who knew them as they told their stories, often complementary, occasionally competing, of his life. So the arrival of the audiobook edition would seem like an opportunity to hear those voices even more directly — the recordings rather than the transcriptions of the recordings. Is there any form better suited to the audiobook than the oral biography or the oral history?

Unfortunately, whether for reasons technical, legal or arbitrary, the listener isn’t offered the voices of, say, David Spade, Robert Smigel, Alec Baldwin and Molly Shannon. Their voices are performed, instead, by audiobook veterans Mark Boyett, L.J. Ganser, and Therese Plummer, whose deliveries suffer from the most common malady afflicting the contemporary audiobook — a tendency toward a kind of stage projection rather than a warm bending to the intimacy inherent to a companionable medium in which a listener sits or walks or works or drives alongside a voice for nine or 19 hours.

Imagine, instead, an audiobook in which listeners could hear Chris Rock in his own voice, saying, “Two guys named Chris both get hired on the same day and share an office. One’s a black guy from Bed-Stuy and one’s a white guy from Madison, Wisconsin. Now, which one is going to OD?” It doesn’t sound the same, and it might not even mean in quite the same way, in the mouth of a professional narrator. Audiobook publishers would do better if they more often approached the form in less of an assembly line manner, and considered, book by book, what the audio edition could do to amplify the existing strong qualities of the original book.

But that’s not enough to diminish the audiobook’s overall pleasure, especially for fans of the late actor, about whom Norm MacDonald could say: “His greatest love was just the act of laughter itself. As much as he made other people laugh, to watch Chris do it was the most beautiful thing you’d ever see. Nobody could laugh with as much unbridled glee. He’d just go into these paroxysms of mirth. If Chris laughed at one of your jokes, you felt like the king of the world.”

Listen to a sample of the audiobook here: