"Cutie and the Boxer": Unforgettable portrait of an unusual marriage

A long-married pair of artists squabble, struggle and refuse to give up in this powerful real-life portrait 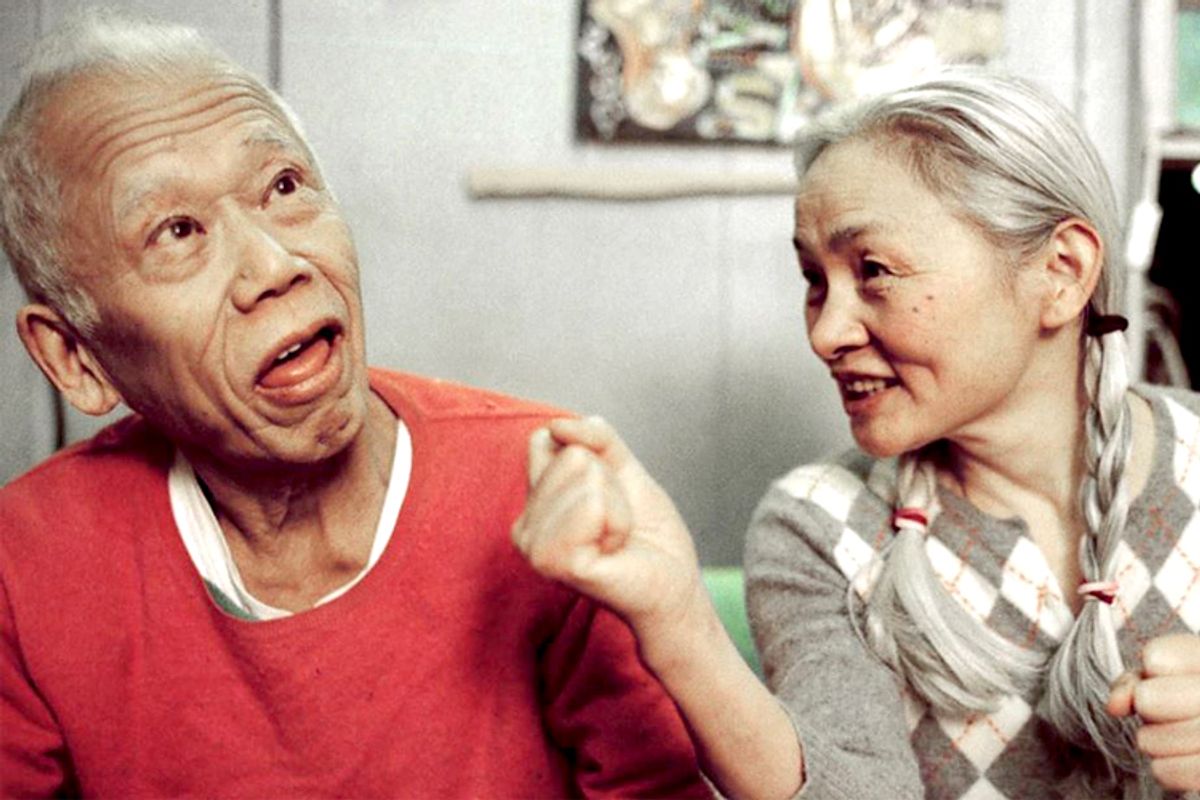 Ushio and Noriko Shinohara from "Cutie and the Boxer" (Radius TWC)
--

It’s safe to say that Zachary Heinzerling’s memorable, delicate and affecting documentary “Cutie and the Boxer” was not created with the concept of mass-market “relatability” in view. So my task here is to tell you that despite its eccentric subject matter, this movie can connect with anyone who’s ever struggled with a long-term relationship, or with the challenges of trying to raise a child and pay the bills without sacrificing your creative vision or crushing your spirit. Although “Cutie and the Boxer” is one of the most unsentimental and unstinting portraits of marriage ever brought to the screen, there’s considerable hopefulness and love in it, and it illustrates the adage that whatever you can survive will ultimately make you stronger.

Mixing archival footage, animation and his own 21st-century photography, Heinzerling tells the story of the often painful and difficult 40-year relationship between Ushio and Noriko Shinohara, a pair of Japanese-born artists who live in New York. They aren’t famous or rich – at best, Ushio Shinohara is a minor name in the contemporary art world, best known for the improvisational “action paintings” he creates with a pair of paint-soaked boxing gloves. They have struggled, month after month and year after year, to make their work and make ends meet in a ruthless, trend-driven marketplace. Early in the film, 80-year-old Ushio hears from his wife, Noriko, that they’re critically short of money again – they’re late with the rent on their cluttered Brooklyn loft apartment, and need another $1,000 or so to keep the utilities turned on and put food in the fridge.

Furthermore, Heinzerling’s camera captures Ushio and Noriko as a long-submerged rift between them is opening up. Ushio is undeniably a forceful personality, and his big-canvas paintings are impressive, but he also comes off as a prideful, entitled jerk, insisting that “the average person should help the genius” and that his career should come first for obvious reasons: “Because I am the husband!” (Their not-so-friendly banter occurs in a fragmented mixture of English and Japanese; the subtitles are necessary for all possible viewers.) Noriko, who is more than 20 years younger than Ushio, set aside her own career for decades to raise their son Alex and serve as Ushio’s unpaid assistant, receptionist and chef, and she’s had quite enough of it. She’s begun to focus on her own work at last – and what a strange and powerful artistic rebellion that turns out to be.

Noriko, it turns out, has been drawing a comic-book-style narrative about an innocent, pigtailed girl named Cutie, who comes to New York and falls under the spell of a charismatic, drunken and constantly broke older artist named Bullie. I suppose you could say there are elements of R. Crumb-style comics or Japanese manga in the saga of Cutie, but visually Noriko’s idiosyncratic work is more like a combination of Renaissance art, children’s-book illustration and Picasso’s ink drawings. The therapeutic rage behind the Cutie cartoons is startlingly frank, and so is the clarity of the artistic vision. This is the document of a woman who has not given up, and never will. Cutie is seduced, impregnated and led far from her intended path, but her free and ferocious spirit is never diminished.

Heinzerling tells this complicated story through strict observation, seemingly hanging back in corners, observing the taciturn Alex or the Shinoharas’ wandering cat, and allowing Ushio and Noriko, in effect, to interview each other. Although he never makes this point, one is suddenly thrust into doubt as to which of these two is the “major artist.” When I look at Ushio’s paintings and sculptures, I think, yeah, that’s impressive but derivative postmodern art, somewhat indecipherable on a conceptual level, made by someone who’s been shaped by Pollock and Warhol and Red Grooms and a lot of other guys like that. When I look at Noriko’s Cutie panels, I first think: Wow, I haven’t seen that before, and then I start thinking about how readily they communicate, and how strongly female viewers are likely to react.

Charming animations based on Noriko’s drawings fill in some of the narrative blanks in what has clearly been a complicated history. Ushio was an alcoholic for years, and the 30ish Alex, raised in a boozy and unstable household, appears to have a drinking problem today. (He is also a painter, although it seems he still lives at home at least part of the time.) Their survival even now depends on Ushio periodically flying back to Japan, with paintings and sculptures crammed into his luggage, in order to cash in on his name recognition as a New York artist. During the movie a big score looms up, in the personage of an interested curator from the Guggenheim, before drifting away again.

By the end of the movie, Ushio has begun to reckon with the fact that he’s no longer the only name artist in the family. The two have a joint opening at a SoHo gallery, where Noriko’s striking, oversize cartoon panels – painted directly on the walls – seem to attract more fanfare than Ushio’s giant motorcycle sculpture. When Ushio goes around the place reading the story of Cutie and Bullie, he doesn’t say much. Later, when they’re at home, he almost ruefully inquires whether Cutie hates Bullie. Oh no, Noriko tells him, that’s not it at all. “Cutie loves Bullie so much.”

“Cutie and the Boxer” opens this week at the Lincoln Plaza Cinema and Sunshine Cinema in New York and the Nuart Theatre in Los Angeles. It opens Aug. 23 in Boston, Denver, Philadelphia, San Diego, San Francisco and Washington; Aug. 30 in Honolulu, Minneapolis and Seattle; and Sept. 6 in Atlanta, with more cities and home video to follow.