Even little kids have a wage gap 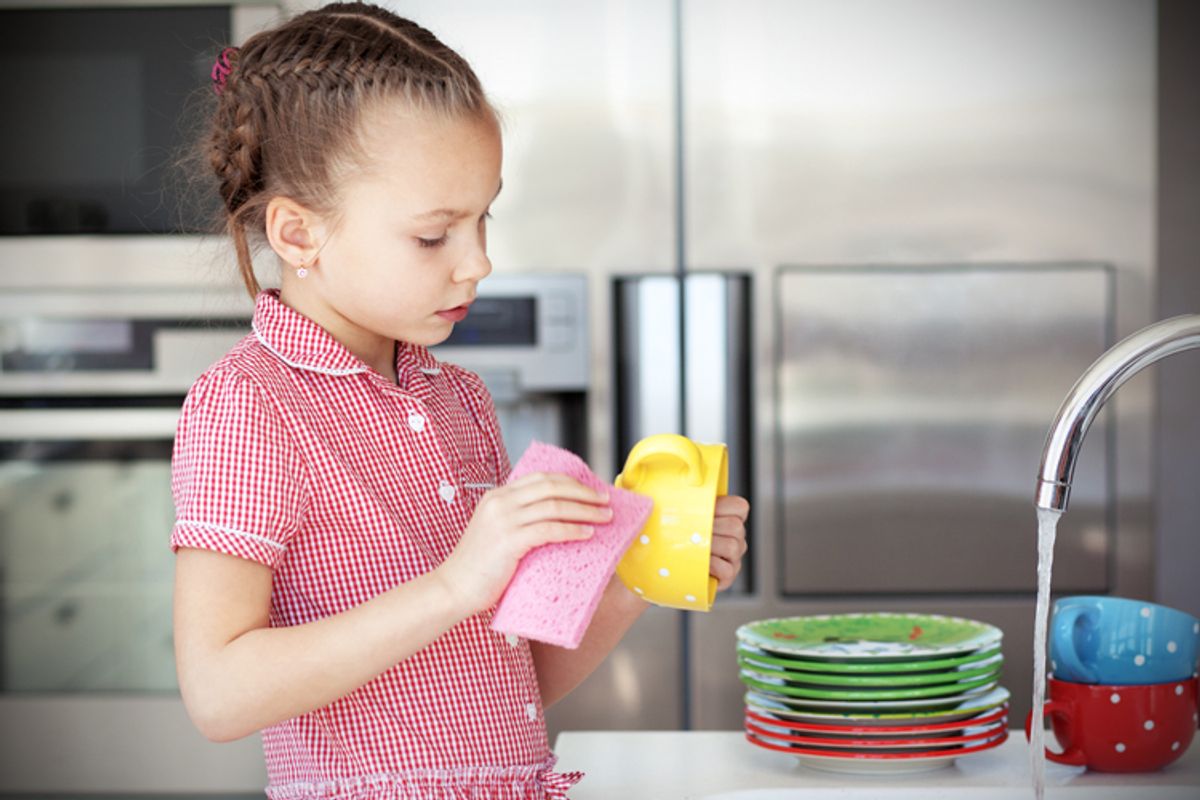 Gender as an organizing principle for how we value labor appears to have depressingly early, yet unsurprising, roots.  Boys, on average, spend two fewer hours doing household chores per week than girls do (they play two hours more). And if they live in households where children are compensated for doing chores, boys make and save more money.  Year after year, studies repeatedly confirm these patterns. The problems women face with unequal pay and housework duties actually start in childhood.

A 2009 study conducted by University of Michigan economists found a two-hour gender disparity in responsibilities per week in a study of 3,000 kids. That same year,  Highlights magazine, a children’s publication, surveyed its readers and found that 75 percent of girls had chores, while just 65 percent of boys did.  This disparity in chores and free time continues into adulthood all over the world.   According to the Organisation of Economic Co-operation and Development (OECD), men “report spending more time in activities counted as leisure than women. Gender differences in leisure time are wide across OECD countries.”

The fact that boys' chores appear to be more profitable makes the childhood chore gap even more disturbing. Turns out, parents tend to value the work that boys typically do more highly than the work girls do. A website that helps parents teach children how to earn, spend and save responsibly, pktmny, found “significant divides based on gender, age and the nature of the task being undertaken by each child,” according to Louise Hill, COO of the company.  For example, mowing the lawn generally garners higher allowance wages than folding laundry. Shoveling a snow-covered driveway might yield more cash in hand than emptying the dishwasher.

There is a fascinating aspect to this gap: the degree to which traditionally feminine chores – folding, dishwashing – take place in the house, and traditionally masculine ones take kids out of the home. Outside work may offer more money-making opportunities, like mowing the neighbors' lawns.  In general, however, feminized domestic work remains hidden and less well paid.  Girls can and do leave the house (for example, they are more likely to babysit) and they also, obviously, do “boy” jobs, like mowing lawns. However, these surveys all indicate that the way chores continue to be delegated perpetuates larger-scale systemic problems in the economy.

These problems were identified decades ago by economist Marilyn Waring in her landmark work, "If Women Counted" (updated in "Counting for Nothing"), in which she documented the degree to which women’s work is invisible and unaccounted for globally. Despite her influence on the ways in which national systems of accounting recognize labor, along with related changes during the past 30 years, her basic findings remain true.

There is a third effect of gendered chore assignments that undermines gender equality: According to a recent study by Andrew Healy and Neil Malhotra, men who grow up with sisters do less housework than their spouses and are also significantly more socially conservative.  Healy and Mahotra found that boys with sisters were 8.3 percentage points more likely to grow up and identify as Republicans. And, they wrote, “Men with sisters were 17 percentage points more likely to say that their spouse did more housework, suggesting that the gendered environment from childhood may have permanently altered men's conception of gender roles."

The bad news is that gender inequities in lifetime wages and time allocation have roots in how we reward children for work they do at home. Childhood scripts continue to lay the groundwork for making domestic work less valued, for prioritizing men’s careers over women’s, for a persistent workforce sex segregation, and for an enduring wage gap.  All because of who dries the dishes and takes out the trash.

The good news, however, is that chores also provide a simple way for parents to foster egalitarian attitudes and long-term gender equity. Just divide the chores equally, regardless of gender -- and if you pay the kids for them, pay them equally too. Then, 20 years from now, maybe your sons and daughters won’t have to read the same statistics all over again.