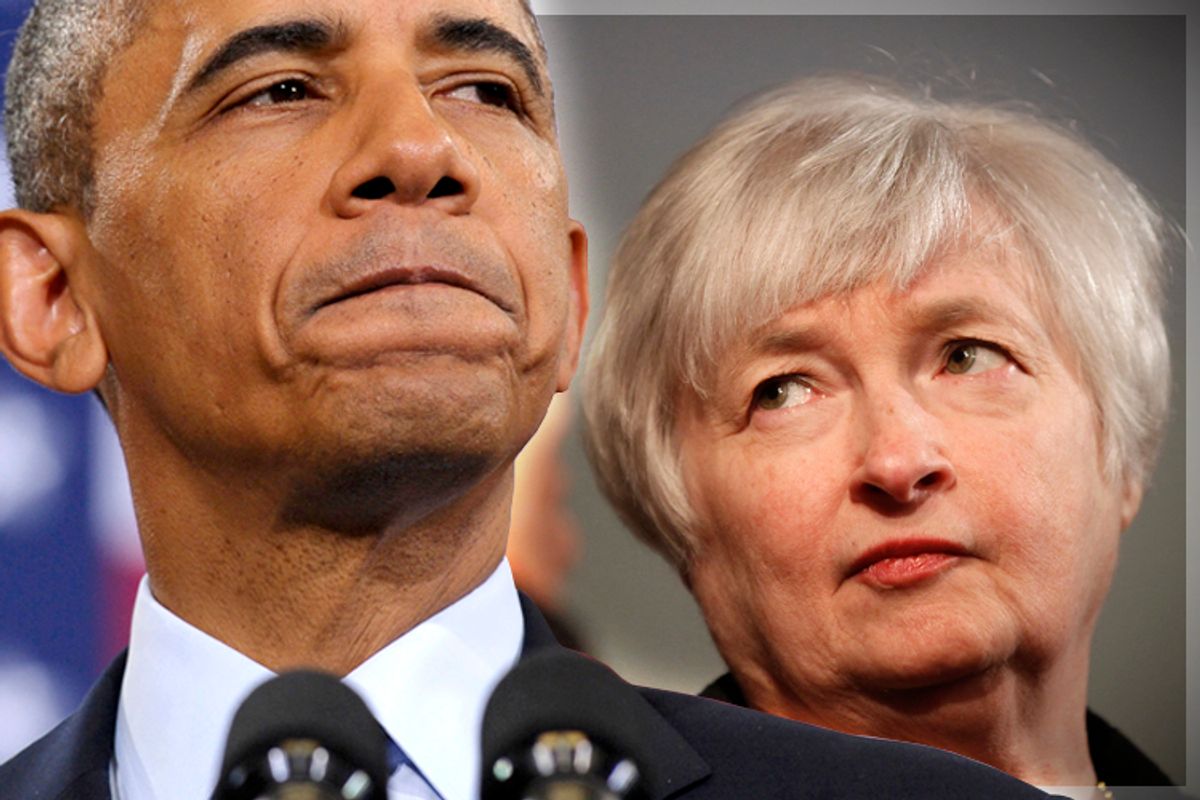 Lost in the headlines about President Obama announcing plans to review and possibly reform NSA policies last week were his tone-deaf remarks, at the same press conference, about the controversy over the next chair of the Federal Reserve Bank. By now everyone knows that two top candidates to replace Ben Bernanke are former Treasury Secretary and National Economic Council chairman Larry Summers and current Fed vice chairwoman Janet Yellen, that there’s been sparring between supporters of each contender, and that Obama is widely believed to favor Summers.

But the president’s decision to defend Summers at length during the press conference was a little odd. Odder still are reports that Obama is irritated by members of Congress who have been lobbying him to crack the Fed glass ceiling and appoint Yellen as its first female chair. The president “wants space” to make the decision on his own, an administration source told Reuters, while the Wall Street Journal describes him as “surprised and irritated” by the pressure.

According to the Wall Street Journal, deputy White House chief of staff Rob Nabors met with David Krone, chief of staff for Senate Majority Leader Harry Reid, and got assurances Reid would back whomever the president picks. "The message was: 'The president thinks it's his prerogative to make these decisions,'" a senior Democratic Senate aide told the WSJ.

But Reid has also warned the president “it would be a difficult fight – one he’d end up winning -- but it would distract from so many other important tasks coming up in the fall, like avoiding a government shutdown and the immigration bill,” one Senate Democratic aide told me. “Ultimately, it will be so divisive within the caucus," Reid has suggested, "it may not be worth it.”

That's obviously the president's decision to make. But he has so far handled the controversy in a heavy-handed way that can only offend Yellen’s supporters. It’s worth noting that Obama’s Illinois ally Sen. Dick Durbin was among the 18 or so Democrats who signed the Senate letter promoting the Yellen pick (sponsored by Ohio Sen. Sherrod Brown), along with Dianne Feinstein, Barbara Boxer, Jeff Merkley, Tom Harkin, Elizabeth Warren and independent Angus King of Maine.

In addition to pushing back on Democrats supporting Yellen, Obama defended Summers in his press conference last week with an odd vehemence. He started off by calling Yellen “Mr. Yellen,” an unfortunate gaffe in a gender-charged controversy. He went on to defend his defense of Summers by telling CBS’s Major Garrett:

I think the perception that Mr. Summers might have an inside track simply had to do with a bunch of attacks that I was hearing on Mr. Summers pre-emptively, which is sort of a standard Washington exercise that I don't like because when somebody's worked hard for me and worked hard on behalf of the American people and I know the quality of those people and I see them getting slapped around in the press for no reason before they've even been nominated for anything, then I want to make sure that somebody's standing up for them. I felt the same way when people were attacking Susan Rice before she was nominated for anything. So, you know, I tend to defend folks who I think have done a good job and don't deserve attacks.

That’s fair. But it’s worth noting that the attacks on Summers began after a preemptive campaign of “whispers” about why Yellen wasn’t qualified for the job, presumably launched by Summers’ supporters. Ezra Klein laid it out in a column in mid-July, "The subtle, sexist whispering campaign against Janet Yellin":

In conversations with members of the Federal Reserve, the Obama administration, financial reporters and the broader monetary-policy community, I’ve had a surprising number of discussions that follow the same pattern: “Yellen is great,” my interlocutor will say. “But ... ”

The “but” is a variation on a theme. She lacks “toughness.” She’s short on “gravitas.” Too “soft-spoken” or “passive.” Some mused that she is not as aggressively brilliant or intellectually probing as other candidates -- though they hasten to say she’s clearly very knowledgeable about monetary policy. Others have wondered whether she could handle the inevitable fights with Congress.

Requests for specifics don’t yield much. It’s more a feeling. An intuition. A sense. But these airy hunches are held by powerful people who will be involved, formally and otherwise, in the selection of Bernanke’s replacement.

What the complaints share is an implicit definition of leadership based on stereotypically male qualities. They aren’t qualities that all men have, or all women lack, but they’re qualities that tend to be more rewarded in men than in women, and thus more prevalent among men than women. And because every chairman of the Federal Reserve (as well as every Treasury secretary) has been male, such qualities have steadily, perhaps subconsciously, informed the portrait etched in many minds of high-level economic policy makers.

So if the president really wanted to defend public servants who “have done a good job and don't deserve attacks,” and who are “getting slapped around in the press for no reason before they've even been nominated for anything” he might have mentioned the whispering campaign about Yellen lacking “gravitas,” which is a well-known Beltway code word for “penis.”

Summers’ defenders attribute the president’s loyalty to his National Economic Council chair’s role in marshaling support for the stimulus bill and the bank bailout and helping to save the economy in 2009. One progressive characterized him to me as a key “austerity fighter” within the administration, and insisted that he didn’t get enough credit for battling Treasury Secretary Tim Geithner and Office of Management and Budget deficit hawk Peter Orszag over spending issues.

On the other hand, he’s widely blamed for bottling up Council of Economic Advisors chair Christina Romer’s belief that the stimulus needed to be much larger than it was. Romer herself told the WSJ: "Larry has many strengths, but dealing with people in a respectful manner when he disagrees with them is not one of his strong suits. You can imagine that by the strength of his arguments he would be able to get people to go along with him. But there's always the possibility that he would cause some serious dysfunction." Given his role presiding over the Clinton-era dismantling of Glass-Steagall regulations as well as controls on trading derivatives and energy futures, some worry he’s the wrong person for an age that requires bank reregulation.

And while he has his feminist defenders, including famous mentee Sheryl Sandberg, he’s never completely recovered from suggesting, while Harvard president, that the shortage of women in science and engineering may have more to do with a "different availability of aptitude at the high end" than with discrimination. That history would make him a particularly provocative choice over the first female Fed chair.

Obama may still pick Summers, and that’s his right. But his high-profile defense of his controversial former staffer (while ignoring the slurs against Yellen) and his very public brush-back to Yellen’s congressional advocates hasn’t made his or Summers’ path any easier politically.