Does anyone care about black women? 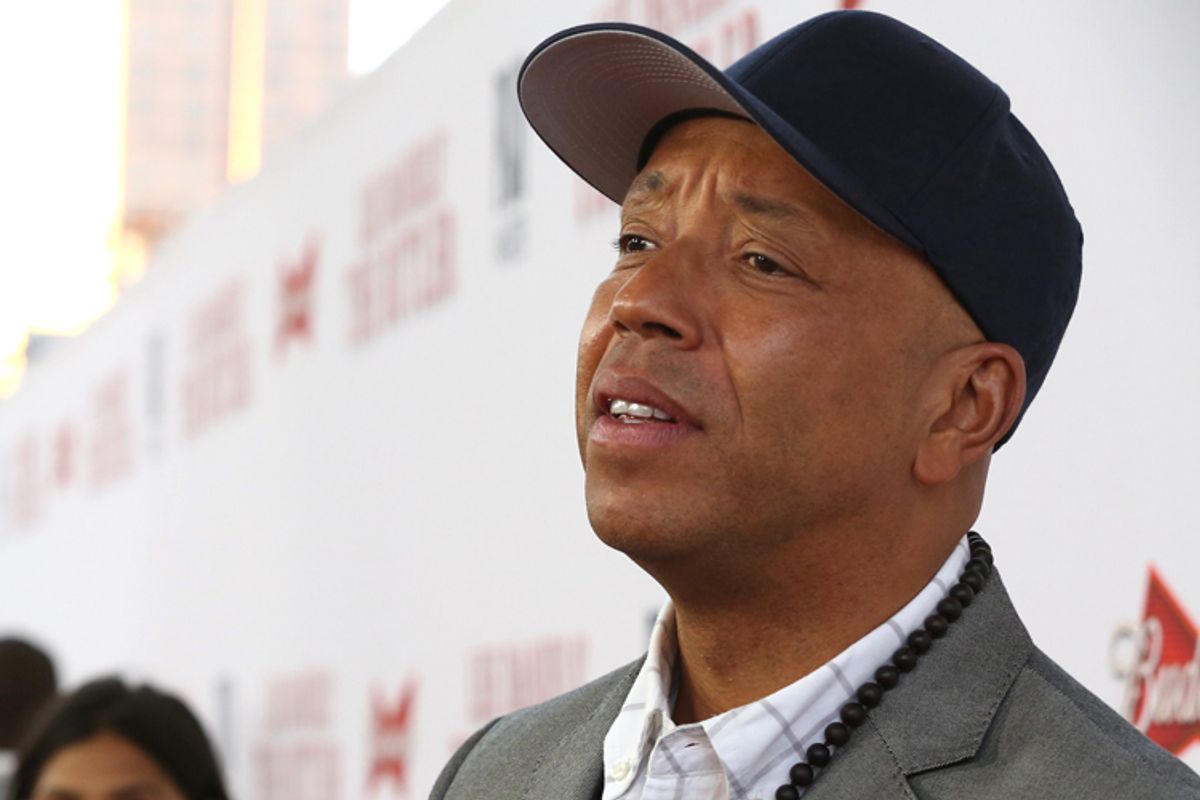 Russell Simmons at The Los Angeles Premiere of 'The Butler', on Monday, August 12, 2013 in Los Angeles. (Photo by Alexandra Wyman/Invision/AP Images)
--

In it, Harriet Tubman’s character played by YouTube comedienne Shanna Malcolm, can be seen willingly cajoling the master into sex, and even penetrating him with an unseen strap-on, in order to manipulate him into giving her freedom. Meanwhile, one of Harriet’s minions played by DeStorm Power hides in a closet with a video camera. The video was released by Simmon’s new YouTube network, All Def Digital.

At best, Simmons is utterly clueless about the realities of black female victimization during slavery; at worst, he’s a willfully ignorant misogynist who delights in minimizing the pain of slavery and rape for black women. This is one of the problems with the resurgence of black nationalist politics that inevitably follows the unjust killing of black boys like Trayvon Martin. With a scarily consistent frequency, black women’s political histories and needs are not only minimized but utterly discounted in service of a narrative of black male racial victimhood.

Earlier this month, Russell Simmons was outraged with Don Lemon for having such a limited view of black struggle that the latter would suggest that ceasing use of the N-word, a halt to wearing sagging pants, and a reduction in teen pregnancy and absentee fatherhood are the solutions to what ails black communities. But Simmons has absolutely no moral authority with which to critique Don Lemon, if he himself finds it reasonable to propagate these stereotypical narratives of black women as hypersexed, unrapeable, cunning and devious creatures.

Yet just two weeks later, he put his imprimatur on this unfortunate Harriet Tubman venture. His disrespect for the broad histories of violence that black women endured during slavery illustrate the profound limits of any form of black politics that have not grappled with the enduring problem of black male sexism. While black nationalist politics (and by nationalist, I mean race-conscious, not “we want our own nation”) has long taken issue with the myth of the black male rapist, it has been far less vocal on the various forms of violence done to black women. The myth of the black male rapist was propagated to justify lynching. The murders of young black men like Trayvon Martin and Jordan Davis, and the improper presumption of their criminality by their attackers, recalls and perpetuates this long history and understandably animates black politics.

But because so much of black politics has been focused on obtaining “manhood rights,” or the ability of black men to exercise the constitutional freedoms and protections given to white men, black women’s concerns have routinely fallen by the wayside in service of these presumably more important and urgent matters. Not only that, but a focus on black women’s issues has often been viewed not only as distracting but also as threatening to a black male political agenda, since giving black women more political power is seen as emasculating black men.

As Jamilah Lemieux, of Ebony magazine, put it on Twitter this week: #blackpowerisforblackmen. What this means, is that though black women are owed the outrage of black male race leaders, we will probably hear very little, if anything at all, from them. After all, the march to commemorate the 50th anniversary of the March on Washington is happening in just another week or two, and black men can’t be bothered to stand up for black women at this time. Unfortunately, that stance is eerily similar to their resistance to letting us speak at the first one.

In his apology issued at Global Grind this morning, Simmons remarked that he thought a portrayal of Tubman “outwitting the slave master” was “politically correct.” Such thinking from him and the video's actors couldn’t be more incorrect. It betrays a staggering failure of imagination. The belief that black women willingly allowed themselves to be raped and sexually exploited is a contradiction in terms. Rape is an act of coercion. It is never willfully endured. Rosa Parks was an anti-rape activist for at least a decade before she ever refused to give up her bus seat in Montgomery.

This video then is not merely offensive, but harmful. It minimizes not only the history of rape, to which all slaves (male and female) were subjected, but also the contemporary realities of rape in the U.S. Some statistics suggests that rates of sexual assault within black communities are as high as 60 percent. The organization Black Women’s Blueprint created a Black Women’s Truth and Reconciliation Commission earlier this summer to help black people attempt to come to terms with our shared histories of violence.

Moreover, Tubman actually outwitted her master by escaping to freedom and then making several return trips to free others, culminating in her grand victory at Combahee in 1863. To put it in the hip-hop parlance that seems to most resonate with Simmons, Tubman was a soldier, in the truest sense of the term.

This is a moment when African-Americans have an opportunity to redefine the tone and tenor of black politics for the 21stcentury. The ways in which historical narratives of race relations past have reasserted themselves with a certain kind of urgency this summer, through the brazen acquittal of Trayvon Martin’s killer, the rollback of the Voting Rights Act, and the continued erosion of affirmative action policies should constitute a collective wakeup call. At the same time, black communities seriously owe it to themselves to have a conversation about what it would mean to place black women’s needs at the center of our politics at least half of the time. Instead, Simmons has distributed what can only be understood as a weapon of mass distraction, whose distorted view of history, if taken seriously as art, will serve only to further cloud our ability to see our way clear to a different future.