Story of a human being: Who gets to be Bradley Manning?

After some very inhumane treatment of the whistle-blower, sentencing is now narrowing in on Manning the person 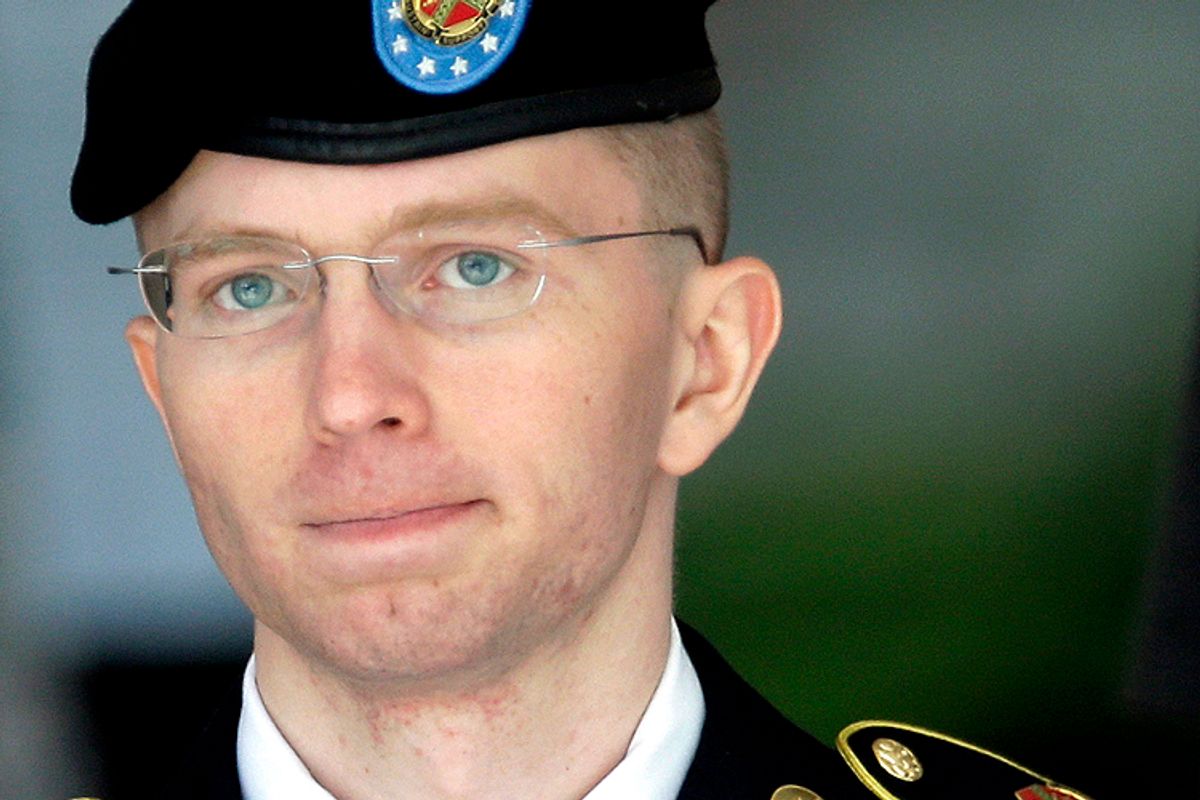 A short, sad apology was made on Wednesday in a Fort Meade military courtroom. Just who made the apology -- who is Bradley Manning -- will become the stuff of history books. For all its seeming simplicity, it is a complicated question indeed, which cuts to the heart of the sentencing portion of this historic case.

Manning's sentencing -- the decision about how much of a possible 90-year sentence for leaking classified material to WikiLeaks the whistle-blower will serve -- has seemingly come down to a referendum on Manning as a person. It has been decided which laws Manning has broken; it has been admitted that the leaks led to no American deaths and an unproven amount of U.S. diplomatic discomfort. The sentencing arguments have now focused squarely on Manning's person. This, despite the fact that for over 1,000 days in pretrial military detention, the 25-year-old has been denied the most basic vestiges of personhood afforded U.S. citizens.

So who offered an apology to military Judge Denise Lind on Wednesday?

Some will say that Bradley Manning -- a naive but well-intentioned whistle-blower -- apologized for any potential harms his leaks may have caused his country (even though Pentagon testimony could show no American deaths as a result of Manning's leak of classified documents). "I did not fully appreciate the broader effects of my actions," Manning told the court.

Some will say that the apology came from Bradley Manning, a dangerous and unpatriotic former military analyst with machinations to attack the United States. "I understood what I was doing, and decisions I made," Manning said.

Some will say the apology came from Bradley Manning, a brave, articulate truth-teller hoping to lessen his sentence with a performative mea culpa. "When I made these decisions I believed I was going to help people, not hurt people," Manning said Wednesday.

Some will say it was Breanna Manning who apologized; a traumatized, fragile soldier who identifies as female. "At the time of my decisions, as you know, I was dealing with a lot of issues, issues that are ongoing and continuing to affect me," the soldier said.

Certainly, what is clear, as WikiLeaks commented in a statement, "Manning’s options have run out. The only currency this military court will take is Bradley Manning’s humiliation." The Bradley Manning who spoke on Wednesday, as Kevin Gosztola reported from the courtroom, was very "different from when he gave a statement in military court where he pleaded guilty to some offenses in February" in terms of his behavior and content of his statement.

Manning's fate -- having been found guilty of charges violating the Espionage Act on six counts, stealing government property, violation of the Computer Fraud and Abuse Act and multiple counts of disobeying orders -- is now firmly in the hands of Judge Lind.

It is illustrative and important that as Lind's decision nears, on the same day Manning gave that short, sad apology, the court heard testimony about the whistle-blower's psychological struggles and gender identity. Largely up until the sentencing portion, Manning qua human being, with desires and personal struggles, has not much come into the equation. The court (and media) have focused on Manning qua traitor, or qua torture victim, qua hero and other broad categories and roles relating to military judicial processing and media storytelling.

Manning as a person -- and this is the true horror of the whistle-blower's ordeal -- has remained a strictly unknown quantity. Removed from society, kept regularly for 23 hours straight in a darkened cell, isolated, permitted only to speak publicly through the complicated, highly attenuated lens of courtroom testimony.

As I have mentioned before, it is highly relevant, when addressing what Manning's case tells us about the U.S. military, political, judicial system at large, to consider Manning's gender identity. Giving testimony on Wednesday, Capt. Michael Worsley, a clinical psychologist, who evaluated and treated Manning between December 2009 and May 2010, when stationed in Iraq, said that the solider's diagnosed "gender identity disorder" would have proven extremely difficult to deal with in the "hyper-masculine environment" of the military.

It's first worth noting that "gender identity disorder" as a diagnosis was this year scrapped from the DSM-5 in favor of the far less pejorative "gender dysphoria." But the main point is that Manning's preferred gender identity, like much about the soldier, remains in a Schrodinger's Cat state of indeterminacy. The story of Breanna Manning and that of Bradley Manning currently coexist, and no judgment can be appropriately made between the two while Manning is held outside the realm of ordinary society, living in a state of bare life, pushing and so revealing the limits of the law.

For "free" citizens, according to current best (but, of course, imperfect) practices, individuals are able to gender identify as they so choose, and ask that their decision be respected and recognized. While chat logs with Adrian Lamo (who eventually sold out the whistle-blower) suggest that Manning may self-identify as female and prefer to go by “Breanna" and the psychologist spoke of Manning's "gender identity issues," Manning has stayed mum on the issue. Or, more precisely, Manning has been kept mum, because Manning -- qua persecuted whistle-blower -- cannot speak (or can only speak in court as a whistle-blower). Such is Manning's tragic position; stripped of personhood. Having spoken only twice publicly in so many years, offering two statements unrecognizable in character from each other, as though delivered by two entirely different people.

For many of us, Manning will go down in history as a hero. But the whistle-blower will also likely spend many decades behind bars. “I hope you can give me the opportunity to prove not through words but through conduct that I am a good person” and can “return to a productive place in society," Manning pleaded with the judge on Wednesday. Manning's statement seemed to acknowledge that the sentencing now has much to do with how the whistle-blower is viewed as a person. And therein lies the dark irony undergirding this case: While Manning-as-person is being currently judged, as a whistle-blower, Manning has been denied the ability to be a person at all.