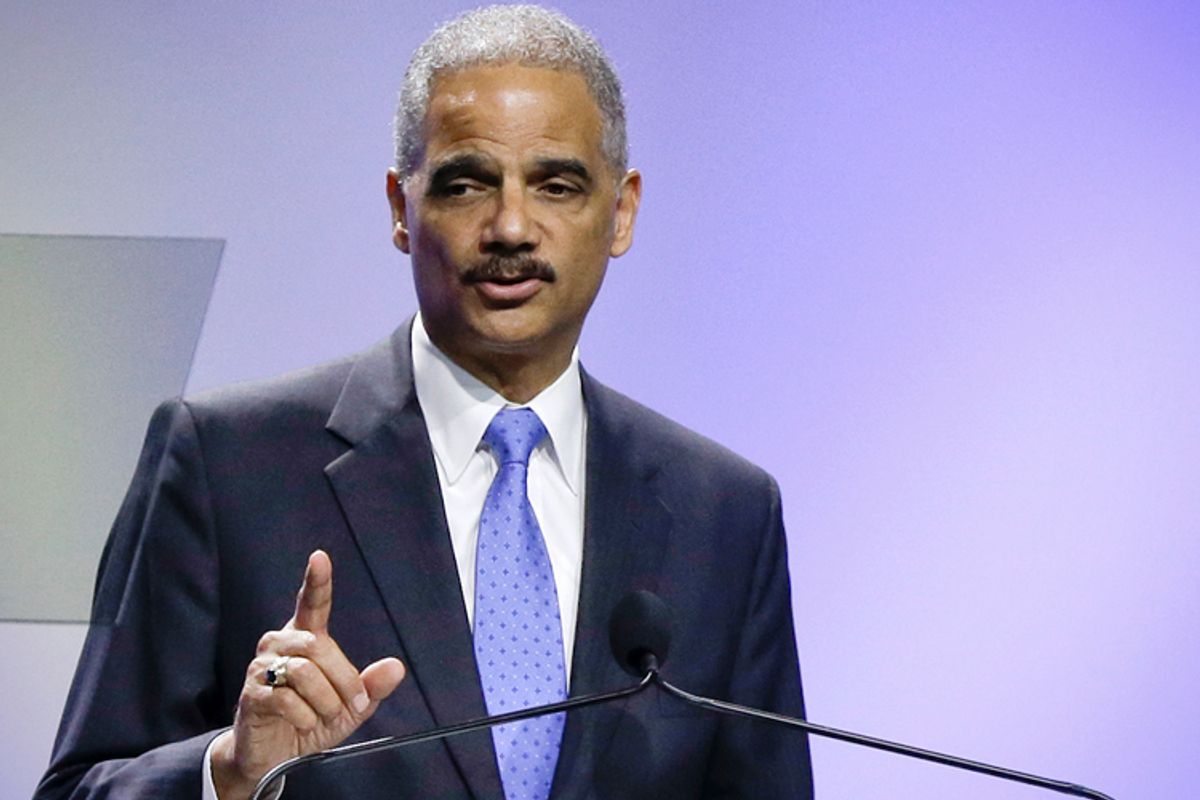 This week, Attorney General Eric Holder spoke out against the impacts of “draconian” sentences for nonviolent drug offenders. “Too many Americans go to too many prisons for far too long, and for no truly good law enforcement reason,” said Holder.

But in unveiling the new “smart on crime” initiative, Holder skipped mention of the sweeping power the president has to shorten or forgive a federal prisoner’s sentence.

President Obama has given just one person early release from prison. As ProPublica has documented, Obama has overall granted clemency at a lower rate than any modern president, which includes both commutations – early release – and pardons. Last year, ProPublica reported that the Justice Department’s Office of the Pardon Attorney rarely gives positive clemency recommendations to the president. Experts have been calling for reform of the entire clemency process.

“Holder’s speech begs the question, why is not more attention given to the broken pardons office?” said Robert Ehrlich, a former Republican governor of Maryland who recently started a law clinic devoted to pardons.

One person who is still waiting to hear about his petition for commutation is Clarence Aaron. He has been in prison since 1993, when he was sentenced to three life terms for his role in a drug deal. Aaron was not the buyer, seller, nor supplier of the drugs. It was his first criminal offense.

The White House ordered a fresh review of Aaron’s petition last year after ProPublica found that the pardon attorney, Ronald Rodgers, had misrepresented Aaron’s case when it was brought to President George W. Bush. An Inspector General’s report released in December supported ProPublica’s findings, and referred the incident to the Deputy Attorney General to determine if “administrative action is appropriate.”

In his speech, Holder expressed concern about racial disparities in sentencing and treatment of prisoners. In 2011, a ProPublica investigation found that whites were four times as likely to receive pardons as minorities. Following our story, the Justice Department commissioned a study on racial disparities in pardons. Hornbuckle says that study is “ongoing.”

“The clemency process will need to be invigorated both from the bottom up and the top down,” said Jeffrey Crouch, a professor at American University, who wrote a book on pardons. “One step is the pardon attorney giving applicants a fair review and a positive recommendation. The other step is President Obama being more willing to use his pardon power.”

For now, Holder’s initiative has little to offer prisoners already behind bars. He directed prosecutors to avoid charges that carried mandatory minimum sentences for certain low-level, nonviolent drug offenders and urged the passage of legislation to change those sentencing requirements. But in 2010, there weremore than 75,000 people in federal custody that had been given mandatory sentences.

“We’ve been getting a lot of calls asking, does this mean my loved one gets to go home?” said Molly Gill, government affairs counsel at Families Against Mandatory Minimums. “For the vast majority of people it doesn’t change their sentences and it isn’t retroactive.” (Holder did expand “compassionate release” for some elderly prisoners.)

In the 1960s, Attorney General Robert F. Kennedy also took a stand against what he described as “grossly unjust” outcomes of sentencing practices – and used commutations to do so. He directed federal prison wardens to seek out and bring himprisoners deserving of early release. Kennedy acknowledged that presidential commutations were “at best only stop-gaps” in a sentencing regime that needed reform. President John F. Kennedy commuted 100 sentences in total, and President Lyndon B. Johnson 226.

Mark Osler, a law professor at St. Thomas University who runs a clinic on commutations, said Obama could also do more. “Holder’s emphasis on how wrong these laws have been, and how damaging the Justice Department’s enforcement of those laws has been, gives me hope that this only the first step,” Osler said.