9 stars whose retirements were fake

From Joaquin Phoenix to Cher, celebs are always pretending to retire and then taking it back 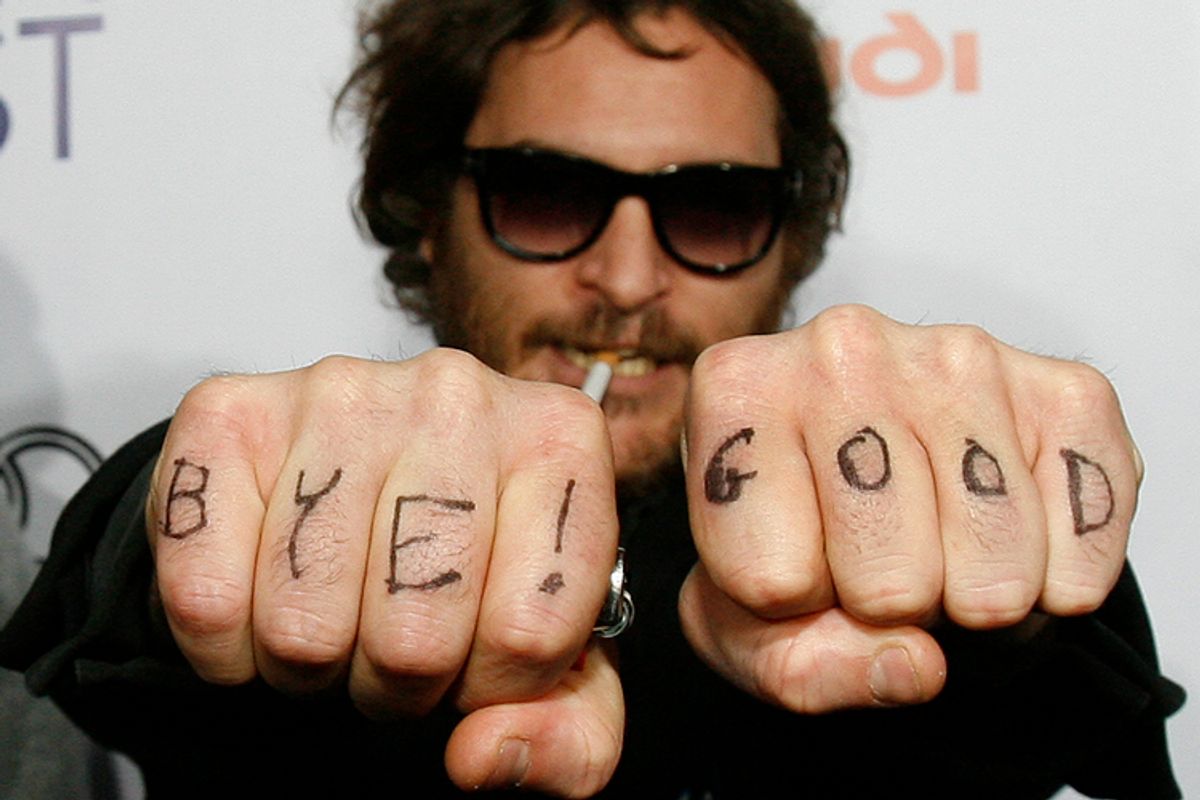 The director of films ranging in theme (and, depending on your vantage point, in quality) from "Traffic" to "Magic Mike" has been nominated for three Emmy Awards for "Behind the Candelabra," what he has said is his final film -- as far as he can tell right now. But pop culture is littered with figures who just couldn't stay away from the accolades, the fans -- and, in some but not all cases, the chance to create meaningful art! Soderbergh may yet be lured back and make a sequel to "Magic Mike" or something entirely new and weird, just like these folks who quit the game only to return a few short years later.

The gold standard for fake retirements, Jay-Z (as his name was then styled), declared his retirement from producing studio albums after the 2003 release of "The Black Album" and threw a "retirement party" concert. During his official retirement period he recorded a duet with Linkin Park that still gets played at college sporting events and an album-length collaboration with R. Kelly, as well as business endeavors. He released his next studio album in 2006 -- the three-year gap between releases being a roughly normal gap even for artists who didn't publicly retire.

Though his metamorphosis into fictional rock star "Chris Gaines" in the late 1990s was befuddling, Brooks was still a major country star when he stepped away in 2000, releasing his final album in 2001. Though he still hasn't released a follow-up, in 2009 he took up a lucrative residency in Las Vegas that lasted through 2012.

The popular comedian, after an arrest for a bar fight, declared he was "kinda done" with performing and touring; though he said he might cancel the rest of the dates in his quest for privacy and a porch somewhere, his spokesman said Williams wasn't serious about retiring a scant four days later.

The star, after a couple of missteps onscreen and the birth of her first child, Apple, agonized in public over whether to retire in order to focus on her family or continue working. For two years, Paltrow appeared only in cameo roles (excluding a role in a tiny independent film directed by her brother); she came back in the summer of 2008 with the female lead in "Iron Man," a film she said had lured her out of retirement for the chance to work with Robert Downey, Jr.

While promoting "Two Lovers," a 2008 film co-starring Paltrow, the "Gladiator" actor announced his retirement, shortly before embarking on an ill-starred rap career. He later announced the whole thing had been a hoax for "I'm Still Here," a mockumentary directed by his brother-in-law Casey Affleck, and went on to get an Oscar nomination for 2012's "The Master."

Cher's 326-date farewell -- which just kept getting expanded! -- came before a Las Vegas residency, an attempted film comeback in "Burlesque," and a new album planned for the fall. At 67, Cher may yet have a couple of farewell tours left in her!

Yet more craven -- or more indecisive -- than Cher, Streisand launched farewell tours in 1999, 2006 and 2012, all while recording, since 1999, six albums, appearing in three weirdly-advised big-screen comedies, and inspiring one ardent fan to record this instance of apparent irony (from 2012): "I should open all my farewell tours in Philadelphia!"

In 2009, Alec Baldwin told Men's Journal, "Movies are part of my past. It's been 30 years. I'm not young, but I have time to do something else." The perpetual maybe-mayoral candidate had tried to get released from his "30 Rock" contract and added, "I consider my entire movie career a complete failure. I'll tell you why. The goal of moviemaking is to star in a film where your performance drives the film, and the film is either a soaring critical or commercial success, and I never had that." He finished out his "30 Rock" years but even after the show's conclusion kept making noise about quitting acting. Before the release of "Blue Jasmine," the second of two Woody Allen films in which Baldwin appeared after he announced he had been planning to quit acting, the actor told Vanity Fair he wanted to quit acting: "I’d love to if I could, yeah. That would be the greatest thing in the world." He is currently slated to appear in two upcoming films.

The remarkably prolific director -- who, in 2012 and 2013, released "Haywire," "Magic Mike," "Side Effects" and "Behind the Candelabra" -- has announced his retirement from moviemaking to focus on other endeavors. Not to dwell on just how much he loves moviemaking, but Soderbergh released 12 films in the 2000s, and if it's hard for us to imagine he'd walk away forever, it seems hard for him as well. As he told Deadline: "For the foreseeable future, the movie door is closed." We'll certainly see!