The Post gets a huge story, but still allows the government to jerk its reporters around 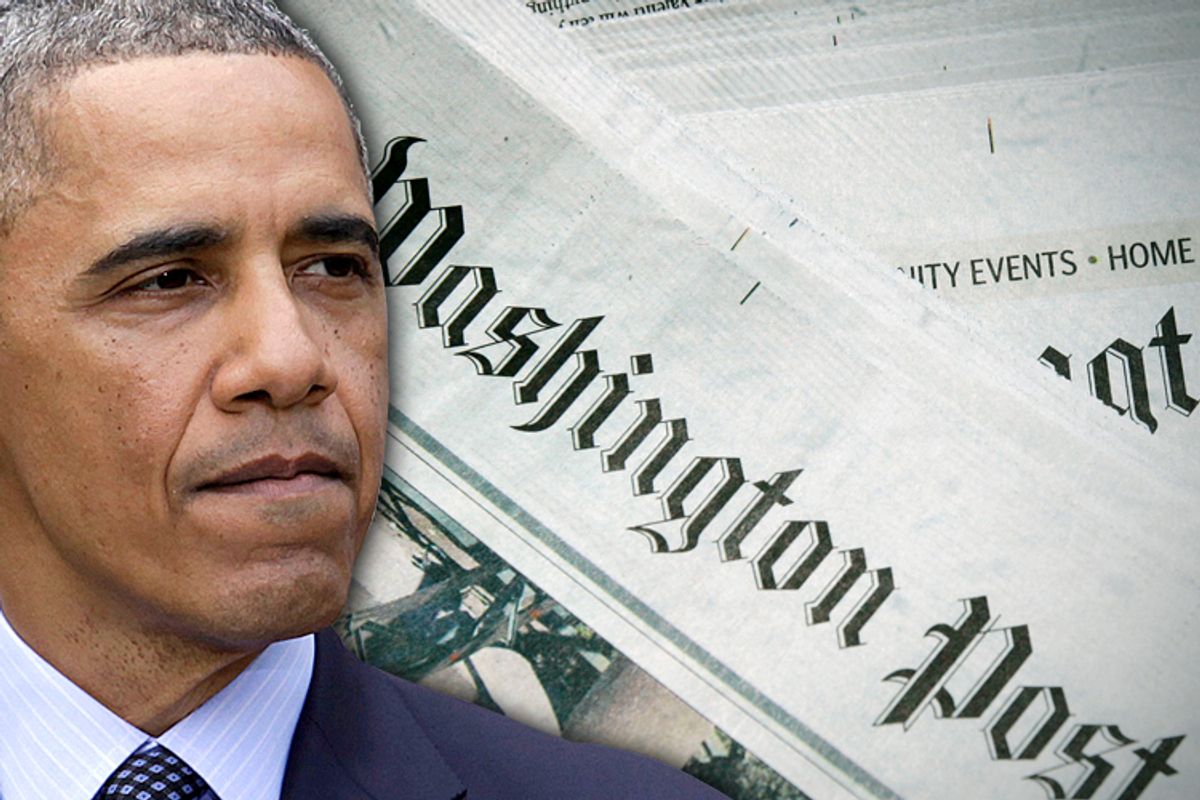 Last night the Washington Post published a major story, by Barton Gellman, showing that the National Security Agency has "broken privacy rules or overstepped its legal authority thousands of times each year" since 2008. The report was based on an NSA internal audit provided to the Post by Edward Snowden. The report, obviously, contradicts numerous statements made by government officials, including President Barack Obama, who previously said that the NSA wasn't "abusing" its powers. Maybe he meant "intentionally abusing," because the majority of these violations were described as errors.

Here's one fun part of the story: The Post apparently interviewed John DeLong, the NSA's director of compliance, for 90 minutes, to get his response to the story. The government said the interview would be partially on the record. "DeLong and members of the NSA communications staff said he could be quoted 'by name and title' on some of his answers after an unspecified internal review." But then the government got cold feet, and took the whole interview off the record. And so:

Two days later, White House and NSA spokesmen said that none of DeLong’s comments could be quoted on the record and sent instead a prepared statement in his name. The Post declines to accept the substitute language as quotations from DeLong. The statement is below.

In other words, the Post refused to pretend that the written statement was what DeLong said in an actual interview. Good for them! This is a great bit of background on the reporting of the piece, and the way the White House deals with the press. But then the Post prints the rather dull statement, and not the interview. My question is, why?

Now, the Gellman story quotes "a senior NSA official ... speaking with White House permission on the condition of anonymity." (And "Three government officials." And "Some Obama administration officials.") That could very well be Mr. DeLong. It also may not be. We don't know! We don't know because the administration was allowed to hide behind anonymity, for ... no good reason. Or at least, for reasons that protect the sources but do not help the reader at all.

The reason the Post didn't print the interview is because of the official rules of professional, mainstream journalism, taught in every journalism school in the country and adhered to by all the major papers. If something is "off the record" it's off the record forever. If you say you will only use approved quotes, you will only use approved quotes. These rules, though, are now regularly subverted by the people newspapers report on. For example: You never, ever give up a source. That is a good rule when your source is exposing malfeasance and will suffer consequences for doing so. When your source is just lying to you, as part of their job, which is to lie to you, there's no good reason not to give up your source. Don't worry about whether or not you'll need to rely on that source for a future story: That source is a liar. Still, mainstream journalists obey the rule. Some of the most prominent reporters in the country would rather go to jail than give up someone who purposefully fed them false information.

As the reporter, your obligation is to the reader, not to the government (or the corporation or the movie studio or the music label or whatever). The point of these journalistic conventions was always supposed to be to ensure that the reader got the best information -- you protected good sources so that you would continue to have good sources so that you could inform the reader. But when you protect bad sources, you are serving them, instead. There is no reason for government employees, speaking officially, with permission, to ever be anonymous. If you grant them anonymity to ensure that you aren't cut off in the future, you misunderstand the flack-reporter relationship. They need the reporter more than you need them, especially if you're the Washington Post.

The only way the "speaking on background" epidemic is ever going to end is if everyone in the press agrees to make it end at once. Reporters hate it and know it's ridiculous. But it keeps happening because everyone agrees to it. Just stop. It's really that simple. Print the DeLong interview, in full. Nothing bad will happen.