The 'fro that shook a city: Dante de Blasio's pride

When Dante de Blasio says in an ad that his dad would end stop-and-frisk as mayor, he makes the issue personal 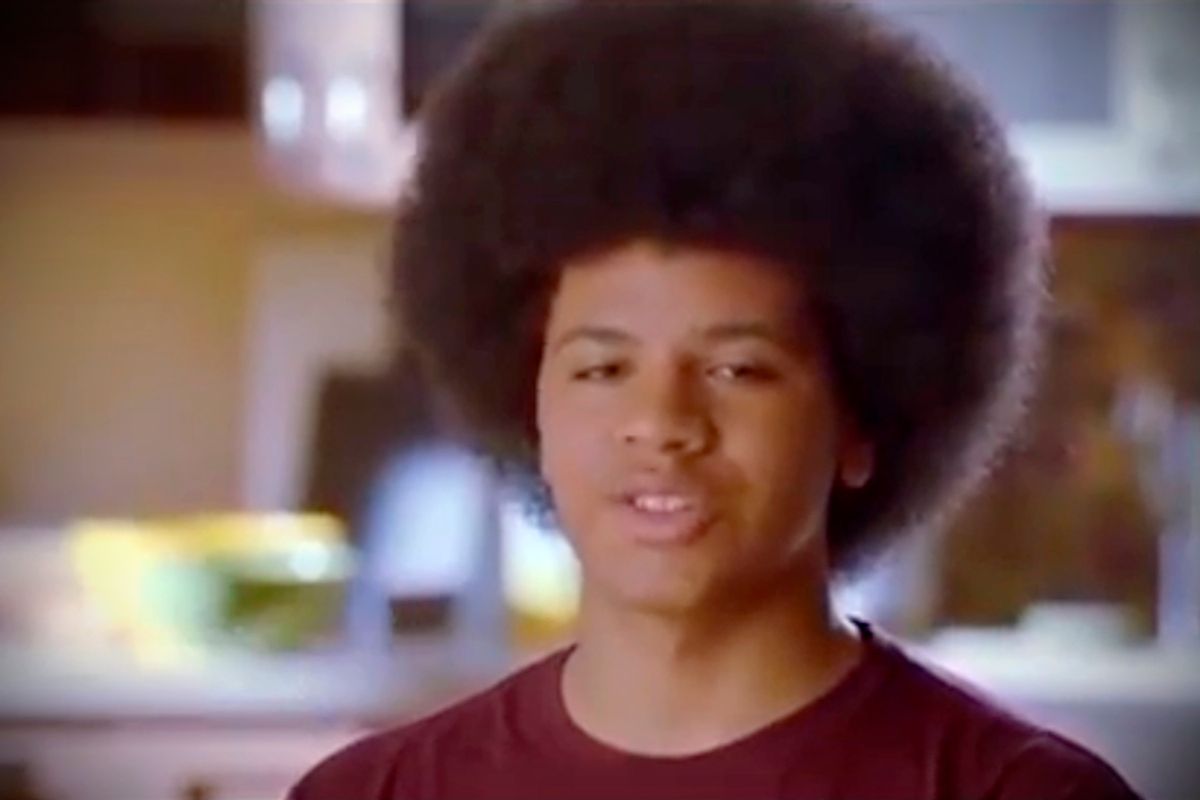 No one can quite explain why Public Advocate Bill de Blasio has surged from fourth place into at least a tie with Speaker Christine Quinn in the New York City mayor’s race over the last month. It came in the wake of Anthony Weiner’s spectacular implosion. It also came at a time when the race was due to tighten – most voters only tune in for the last six weeks of a campaign, if that. And of the top-tier candidates, de Blasio offers the clearest break with the reign of Michael Bloomberg, especially on the issue of transforming the city’s “stop and frisk” policies, which just this week a federal judge found unconstitutional.

But some of us have a hunch it’s tied to something else: the remarkable de Blasio ad featuring his 15-year-old son, Dante, a warm, charismatic television natural with a gigantic Afro, which began airing just days before de Blasio began climbing in the polls. It’s here.

Dante runs through the reasons to support de Blasio without saying the candidate is his father: his commitment to affordable housing, to taxing the wealthy to fund universal preschool, and to ending Bloomberg’s stop-and-frisk policies. That’s what gives a sweet, sunny ad its poignant hook: Technically, Dante is biracial – his mom, Chirlane McCray, is black, and de Blasio is white – but to a police officer, the tall kid with the big ‘fro is going to read as African-American, and thus a prime target of the controversial Bloomberg-Ray Kelly policy.

As the ad closes, it shows de Blasio at home with Chirlane, as Dante says straight to the camera: “Bill de Blasio will be a mayor for every New Yorker, no matter where they live, or what they look like.” Then there’s a shot of him walking down the street with de Blasio, who puts his arm around him, as Dante delivers the kicker: “And I’d say that even if he weren’t my dad.”

The first time I saw the ad, I was moved by its simplicity and Dante’s smiling presence, and I went to YouTube and watched it three times. Praising the ad on Twitter with Chris Hayes and our own Alex Pareene last night, I got into a debate with Guardian writer Michael Cohen, whom I admire. Although Cohen said he plans to vote for de Blasio, he complained that the ad seemed “exploitive” and “a blatant effort to win black votes . . . and using a 15 year old kid to do it.” I tweeted back:

Jeez, yeah, I don't know where he dug up a 15 year old black kid to play his son! Awful. @speechboy71 @pareene @chrislhayes

But Cohen deserves a more respectful answer. First of all, politicians have been using their kids in ads since God made politicians, and maybe it’s all exploitive, but it’s unremarkable to me. What works is that Dante’s so good in it. If Dante looked like he was making a hostage tape, I’d feel differently about it, but he seems to be genuinely happy. In an interview with DNAinfo he told Colby Hamilton: “I’m glad to help my dad however I can,” he said. “Honestly, it's my hair and I’m glad to show it off.” (There's also a conversation with his hairdresser. Read the whole thing.)

The centrality of stop-and-frisk to the mayor’s race is another reason the ad works. In one of my first questions to de Blasio when I interviewed him early this month, I asked him about it:

This has to be personal to you – you have a biracial teenage son, Dante, who, in the world of police, is going to be perceived as black. What do you tell him?

We have told him repeatedly, he will be stopped. We haven’t been able to say to him, “It might happen.” We’ve had to get across to him that it will happen, and you must be prepared, and you must do everything right, and there must be no misunderstanding. And it’s a real tragedy in this city that parents are having this conversation every single day, trying to warn young people not only how you stay safe and how to avoid criminals, but also how to deal with police who will treat them as criminals  — how to not move suddenly, and not reach into your pocket, because there could be a tragic accident. I’ve told him he’s got to freeze, keep his hands visible, follow instructions to the letter.

I think about what that’s saying to the self-esteem of young men of color, that they have to hear this caution, this warning, but also the mixed message: We want everyone to respect the police, but you’re going to be looked at as if there’s something wrong with you. That’s why you have to be even more careful. It’s a horrible message. It’s corrosive. Then what happens is a defensive, frustrated, reaction from parents, grandparents and family members who feel disrespected fundamentally. It makes it much harder for the police to work with the community to make us safe.

“To make us safe.” Interesting. It seems politically relevant to me that for de Blasio, Dante makes this issue personal.

And finally, is it pandering for de Blasio to want black voters to know he’s married to a black woman, and raising two children? It would be worse if he hid them, obviously, but Cohen wasn’t suggesting that. At a time of racial polarization, in the wake of the George Zimmerman verdict, as communities of color are struggling to make racial profiling and stop-and-frisk policies as important to the white left as Edward Snowden’s NSA revelations – all of this ads up to why Dante’s ad is powerful without pandering.

I have no way of knowing if it’s making a discernible difference in the campaign; maybe pollsters will figure that out. But I’m happy to know more about Dante de Blasio. He told DNAInfo that he fell in love with the Afro in the third grade. “A lot of older people like to talk about how they used to have Afros, like in the 70s and 60s, because that was the time when it was really popular,” he added. “At the time I really just liked the style,” he said. “I was just bringing back the style that meant a lot.”