The left and right are not similar: Another reality check 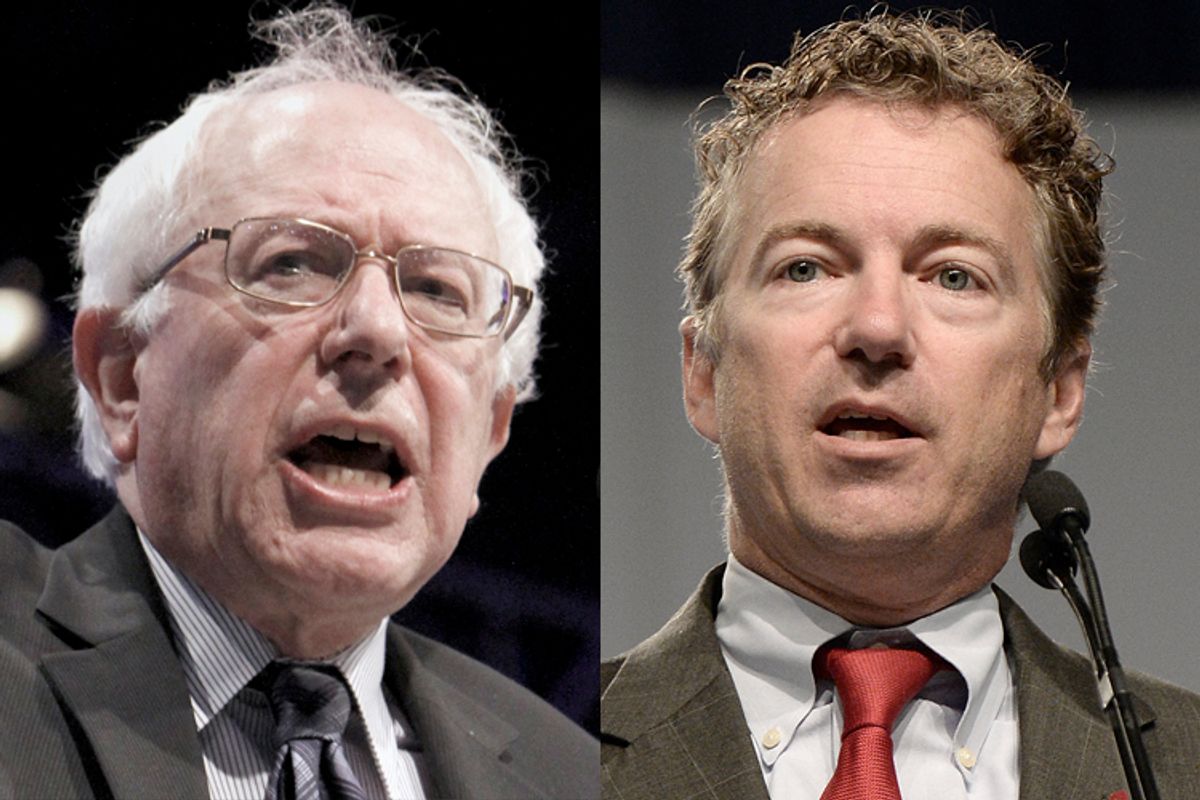 That Tea Party conservatives aren't much interested in compromise isn't particularly surprising. But it's striking to see the sentiment laid out in so many words, as a coalition of 20 Tea Party groups did in a letter urging Sen. Lamar Alexander, a fairly moderate Republican from Tennessee, to retire.

"Unfortunately, our great nation can no longer afford compromise and bipartisanship, two traits for which you have become famous," the open letter reads. "America faces serious challenges and needs policymakers who will defend conservative values, not work with those who are actively undermining those values."

It's a remarkable statement. These activists aren't saying that there are certain issues they hold dear and lines that must not be crossed, they're saying that compromise in and of itself is unacceptable. Of course, compromise and bipartisanship are necessary to do anything in divided Congress, so these Tea Party groups aren't just drawing a strong line, they're categorically rejecting the importance of governing. Period.

The letter, which seems like a perfect distillation of the Tea Party at its most nihilistic, should underscore that any attempt to compare "the far right" to "the far left" is false equivalency. Throwing your hands up and "party polarization" on both sides is a cop-out, and an incorrect one.

Yes, both parties have become more polarized, but one more than the other. Republicans are more conservative than they have been in over 100 years, have fewer moderates than Democrats, and have changed more, political science research shows -- and it's only getting worse.

"While the Democrats may have moved from their 40-yard line to their 25, the Republicans have gone from their 40 to somewhere behind their goal post," Norm Ornstein of the conservative American Enterprise Institute and Thomas Mann of the Brookings Institution wrote in a Washington Post Op-Ed on congressional disfunction titled "Let’s Just Say It: The Republicans Are the Problem."

The current GOP is now well to the right of George W. Bush, Ronald Reagan and even Richard Nixon.

What about the activist progressive left, the functional opposite of the Tea Party? Does anyone on the left say compromise is inherently wrong? "Never. Nobody with any credibility says that," said Charles Chamberlain, the executive director of Democracy for America, the lefty grass-roots activist group started by Howard Dean.

"It's a major difference between the two sides of the spectrum and it's a great example of why the Tea Party can't govern," he told Salon. "The reality of governing is that to create good policy that represents the values of all Americans, compromise and bipartisanship are what makes that happen."

That said, Chamberlain continued, there are certain issues where the left will refuse to compromise. Take Social Security. The Obama White House proposed trimming benefits to seniors in its budget proposal this year, and centrist and conservative budget hawks have been clamoring for reforms for years. But polls shows that Americans of both parties not only want Social Security benefits preserved, but want them expanded, so Chamberlain doesn't see cutting benefits as a compromise -- he sees it as a cave-in.

Even when liberals are at their most obstinate, it's driven by the desire to achieve a certain policy outcome, not by a knee-jerk opposition to compromise in and of itself. Take immigration reform, where even some of the more radical pro-reform groups are willing to give their blessing to massive border spending, even though they detest it, in order to pass the larger package. Meanwhile, anti-reform conservatives refuse to give an inch. Or Obamacare, a massive compromise itself that the activist wing of the right is trying to kill through undemocratic and pain-inducing sabotage. Liberals were crestfallen by the demise of a public option in the healthcare debate, but ultimately came around on the law.

And while Republican leaders fear their base and constantly kowtow to its whims, Democratic leaders dismiss the "professional left" as "craz[ies]" who "ought to be drug tested," diminishing the "far left's" power and relevance. It's the reason Rand Paul is a Republican hero while Bernie Sanders is marginalized. It's the reason Republicans compete with each other for who can be more conservative, and always wear the label as a badge of honor, while Democratic lawmakers (outside of primaries in very safe districts) will rarely own up to the term "liberal," let alone try to out-liberal their colleagues in Congress.

"Compromise for the sake of compromise is not valid," Chamberlain explained. "And I get where they're coming from, because there are times when it definitely feels that way ... But I think the bigger picture here is that this is government, this is how it works."