Is Egypt's blood on America's hands?

Yet another American-sponsored military coup goes wrong, while we talk about our commitment to "democracy" 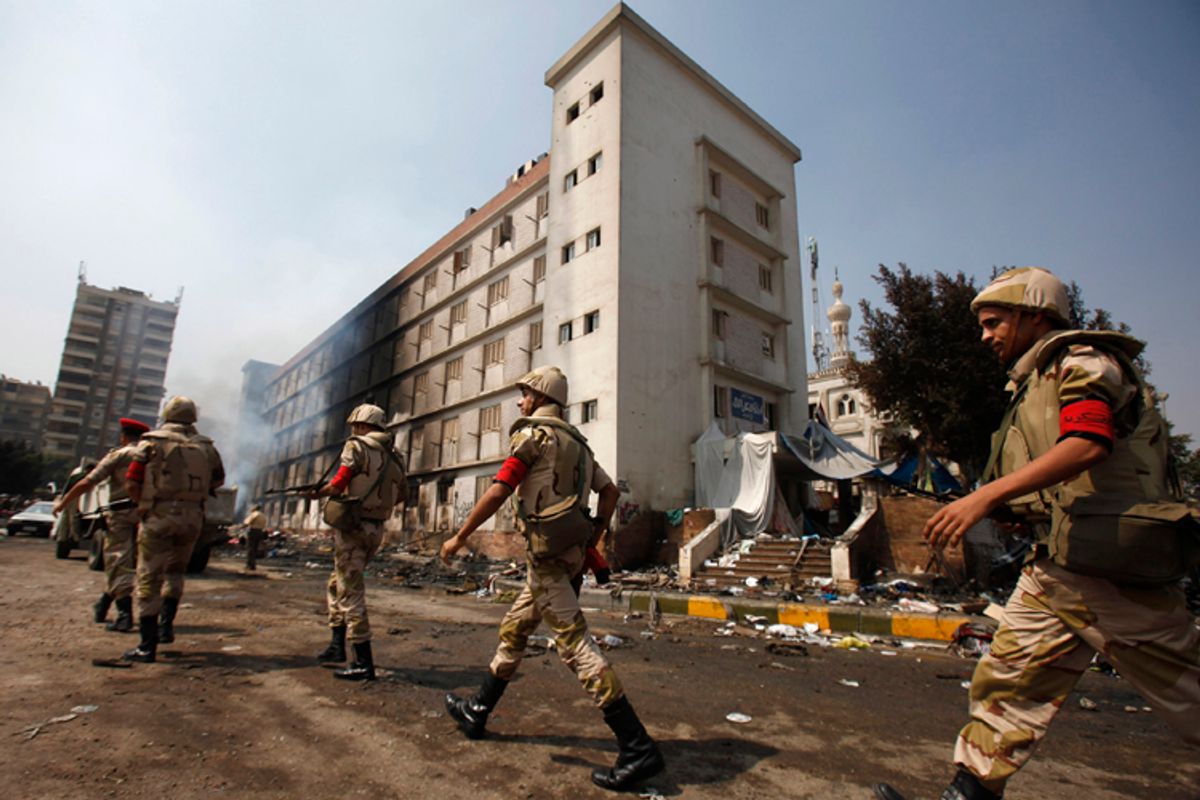 Barack Obama and John Kerry are not responsible for the massacre of hundreds of civilian protesters by the Egyptian military – at least not directly. But their hands are stained with Cairo’s blood, all the same. I’m sure the crafters and shapers of American foreign policy are genuinely horrified by the scale of carnage in Egypt’s streets, and by the looming threat of civil war between Islamic fundamentalists and secular forces. But it happened on their watch, and they’ve got to own it. The current Egyptian crisis was shaped by decades of United States policy under presidents of both parties, and by the long-standing American preference for “friendly” authoritarian regimes and military coups over unpredictable elected governments. Does anyone still wonder why the world laughs when we talk so earnestly about democracy?

It’s entirely possible, in retrospect, that the U.S. government had no good options when faced with the massive Egyptian street protests of late June and early July. President Mohammed Morsi’s Muslim Brotherhood government had won a majority at the polls but subsequently lost its “legitimacy,” in political-science terms, by failing to establish any kind of social consensus or administer a competent state apparatus. Millions of ordinary Egyptians were eager for a regime change, democratic or not. Egypt is a diverse and complicated society of 85 million people with deep-seated structural and political problems, not least of them the long-running conflict over the cultural and political status of Islam. Those have tangled historical roots, and it would be patronizing and simplistic to claim that they were entirely created by U.S. foreign policy.

Still, there’s no getting around the fact that Egypt has been an American client state for the last 40 years, a relationship cemented by the Camp David accords and the peace treaty with Israel in 1979. For most of that time, your tax dollars and mine flowed by the billions to subsidize the brutal and corrupt regime of Hosni Mubarak, who was given a free hand to crush all forms of political opposition as long as he kept the peace with Israel and battled the rising tide of Islamic terrorism. It’s not nearly enough to say that the U.S. turned a blind eye to Mubarak’s secret police, prison camps, kangaroo courts and other human rights violations. We directly enabled them, financing and training his military officers and state-security apparatchiks. (As everybody who reads the news now knows, our military aid to Egypt runs about $1.5 billion a year.)

To claim that American officials didn’t know where the money was going, or what kinds of sinister activities it was funding, is ludicrous. As a 2007 Amnesty International report explained, Egypt under Mubarak became “an international center for interrogation and torture” on behalf of more squeamish countries, including the U.S. and Britain. A few specific cases subsequently came to light, including that of Abu Omar, an Egyptian who was allegedly kidnapped by the CIA in Italy in 2003 and sent to a “black site” prison in Egypt, where he said he was whipped, sodomized and subjected to electric shocks. After four years in Egyptian custody, he was released without charge. Another CIA capture, an Australian citizen named Mamdouh Habib, was apparently tortured by the Egyptians until he invented a juicy confession: He had trained the 9/11 hijackers in martial arts! (He hadn’t.) Habib spent several years in Guantánamo Bay before being cut loose.

Given what has happened in Egypt over the past days and weeks, we’re surely due for another round of ponderous, “pragmatic” punditry from the likes of Richard Cohen of the Washington Post and Thomas Friedman of the New York Times about how we’d have been better off sticking with Mubarak all along – if he was a bastard, he was our bastard, etc. I don’t even think that makes sense within Cohen or Friedman’s blinkered, realpolitik understanding of the world; by the time of the Tahrir Square demonstrations of early 2011, no amount of American meddling could have redeemed or rescued the Mubarak regime. But the larger point is that commentators of that ilk are deliberately missing the larger historical narrative, because they support the amoral and apolitical exercise of American imperial power, but don’t want to look it directly in the face.

Here’s what I mean: The fact that the Obama administration had only bad options to choose from in Egypt this summer, and ultimately green-lighted a military coup that appears to have reinstated many of the worst police-state aspects of the Mubarak era (and even some of its leaders), in itself reflects the long-term failure of American policy. We bankrolled a guy who ran an autocratic terror state for many years, and the only effective opposition group was a clandestine network of dogmatic religious zealots who turned out to be unready to govern as a democratic political party. Imagine that! Beyond that, what happened in Egypt is another example of the dark current that has run through U.S. foreign policy since at least World War II, and arguably much longer than that. This is the dark current that Bradley Manning and Edward Snowden have lately given us glimpses of, the self-perpetuating national-security state that exists entirely independent from the superficial struggles of partisan politics.

On one hand, this means the “black budget” spy agencies we’ve learned so much about recently, from the NSA’s vacuum-cleaner sweep of electronic communications to the DEA’s recently revealed Special Operations Division to other things whose names and missions we almost certainly still don’t know. It also means classified military operations, from the drone wars to the raid that killed Osama bin Laden to the bearded, plain-clothes Americans who kick down doors at night in Afghanistan. On a grander historical canvas, it’s also about the way American presidents travel the world giving inspirational speeches about democracy, while the secret agents who supposedly work for them pursue a completely different agenda, in the service of corporate interests or geopolitical gamesmanship. Actions speak louder than words, and America’s real foreign policy has been to subvert democracy at every turn, replacing untrustworthy elected governments with compliant military strongmen wherever possible.

American military intervention in overseas governance goes back as far as the Barbary Wars of the early 19th century, but really gets going with the annexation of the Philippines and the virtual annexation of Cuba after the Spanish-American War. We see the covert, “plausible deniability” form of intervention emerge as early as Woodrow Wilson’s clandestine attempts to aid anti-Soviet forces in the Russian Civil War of 1918. But it was the CIA-sponsored coup d’état in Syria in March of 1949, in which a civilian government was overthrown by the army’s chief of staff – who promptly approved an American oil pipeline – that established a pattern that’s been repeated dozens of times.

Nobody really remembers that Syrian coup, largely because the new right-wing military government was itself overthrown (by a different cabal of generals) a few months later. But at the risk of oversimplifying a whole lot of history, one could say that Syria has been screwed up ever since, up to and including the 40-year rule of the Assad family and the current civil war. That illustrates the nearly inflexible rule of American covert regime-change operations, which was so dreadfully underscored in Egypt this week: They almost always make bad situations worse.

Exhibit A for that argument would be the most famous of all postwar coups, the joint Anglo-American operation that helped overthrow Iranian Prime Minister Mohammad Mossadegh’s elected government in 1953, and installed Shah Mohammad Reza Pahlavi on the throne. Actually, that one worked brilliantly for years, establishing Iran as a pro-Western oil producer and regional power full of martinis, modern art and miniskirts, and enormously enhancing the prestige and influence of the CIA within the U.S. government. But if you saw the animated sequence at the beginning of Ben Affleck’s “Argo,” you know how it all ended, with the Shah’s secret police and the return of Ayatollah Khomeini and the 1979 hostage crisis and a theocratic regime that gives the West conniptions to this day.

In 1954, the CIA helped overthrow Guatemalan President Jacobo Árbenz, likely at the behest of the United Fruit Co., whose unused Guatemalan farmland was being expropriated. Whatever you make of Árbenz’s socialist land-reform agenda, it gave way to several decades of virtual or actual military rule, widespread repression and a gruesome civil war that featured numerous massacres by U.S.-trained and financed death squads. Several years of covert warfare in the former Belgian Congo, in which the CIA joined forces with South African mercenaries and Cuban exiles to fight against Patrice Lumumba and Che Guevara, ended in 1965 with the ascension of pro-American dictator Mobutu Sese Seko, one of the most corrupt, abusive and authoritarian figures in the nightmarish history of post-colonial Africa.

One could go on: There were also likely or proven U.S.-supported Cold War military coups in Brazil, Ghana, South Vietnam and Turkey, and covert American military operations in Soviet-occupied Afghanistan, Nicaragua under the Sandinistas, Angola and Cambodia (where the Reagan administration actually supported remnants of the Khmer Rouge genocidal regime). Most famously of all, the CIA spent several years funding and planning the overthrow of Chilean socialist President Salvador Allende, who was ousted in 1973 in favor of the murderous military dictatorship of Gen. Augusto Pinochet. But I think you get the point.

Or maybe none of us have yet grasped the point, which goes well beyond the fact that our country’s actions around the world over the years have been wildly out of step with our political rhetoric. It’s more that the entrenched foreign-policy and intelligence establishment of the United States – what is sometimes called the “permanent government” – is actively hostile to democracy. Its co-dependent enablers in the Beltway media or the academic world, from Cohen and Friedman to Niall Ferguson, have more sophisticated ways of framing this, to be sure. As we are starting to see more clearly, that establishment has done its utmost to eat away the underpinnings of democracy at home, and has attacked and destroyed it all over the world.

As I said earlier, the tragedy in Egypt cannot be exclusively blamed on the United States. But it serves the interests of those who would rather not see democracy, which by its nature is unpredictable and uncontrollable, take hold in the Arab world. It also reminds us that this dark current in American foreign policy is by no means confined to the Cold War past, and has little to do with which party nominally holds power in Washington. Did President Obama and his policy advisers have other realistic options, when they gave the Egyptian generals the go-ahead to seize power on July 3 and enabled, at least indirectly, the bloodshed that has followed? Maybe not. They came in partway through the play, and just followed the script.