With Republicans seemingly hand-picking their debate moderators, they may be in for an unanticipated nightmare 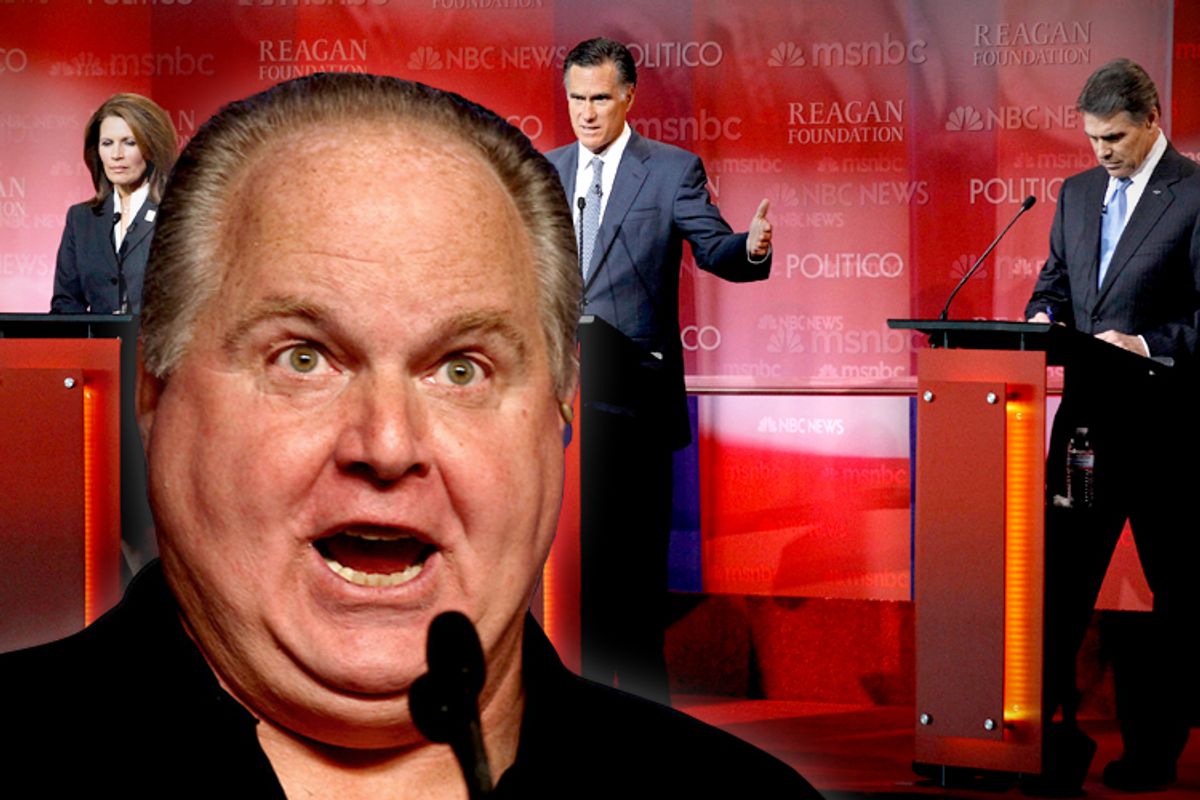 If some shortsighted conservatives get their way, we may soon be treated to Rush Limbaugh quizzing Republican presidential candidates about which liberal activists should be thought of as sluts. Now that’s the way to appeal to swing voters.

In case you missed it, the Republican Party has pledged to boycott NBC and CNN from their 2016 nomination debate schedule. They are also planning to cut back on the total number of debates. And even if Republicans don’t really decide to spotlight the conservative talk show hosts most likely to remind swing voters about what they don’t like about the GOP, the above is still enough to convince many observers that Republicans have lost all interest in talking to anyone beyond their most dedicated voters.

It’s also a good excuse to take a step back to think about what the point of debates before and during presidential primary season is, anyway. Because it turns out that not everyone’s interests are pointing in the same direction.

The most important group here are party actors – the politicians, activists, campaigning and governing professionals, formal party staff and officials, and party-aligned interest groups who generally compete and cooperate to choose the nominee. Debates and candidate performances do a number of things for these groups. They put candidates on record in support of party positions (or sometimes contested positions) on public policy. They also are an opportunity for policy entrepreneurs and interest groups to elevate their policy concerns – that is, one way to get an issue taken seriously by the party is to plant a question about it in a high-visibility presidential debate.

That’s not all. Party actors who don’t get a lot of time with candidates, and in a very large nation, that’s going to be a lot of party actors, no matter how hard the candidates try to spread out their time – to get a better sense of them. It’s hard to know how important this factor is, but it’s probably not nothing. And then party actors also can use the debates to guard against duds. At least with Rick Perry in 2012, that’s almost certainly what happened: Republicans who might have supported Perry otherwise were terrified that he would make a lousy general election candidate.

Debates have a couple of other uses for the party as a whole. If possible, the debates should showcase the party in a positive light. That’s almost certainly an overrated factor, but it can’t hurt. And given that high-visibility debates are part of the fall campaign, it can’t hurt to get the eventual nominee some practice, although again it’s easy to overstate how important that is.

Moving on to the candidates: There’s a clear and easy divide here. Front-runners have little to gain and much to lose from debates; long shots, and novelty candidates who are really running for a slot on Fox News or a radio talk show, have little to lose and plenty to gain. That’s pretty straightforward. It does suggest, however, that at some point the front-runner’s interest in shutting down debates will be adopted by the rest of the party. That is, once party actors have chosen, there’s no real reason to risk damage to their choice by continuing. That’s exactly what happened in 2012, when Republicans stopped debating soon after Mitt Romney became the clear choice (although still a ways before the last of the also-rans conceded defeat).

On the side of the losing candidates are potential state and local party debate hosts. Hosting a debate is great for the host party; local party actors get time with the candidates, or at least have a good chance for it, and that may translate into fundraising and organizational enthusiasm. So potential hosts are almost always likely to seek additional debates.

The other players here are the broadcasters and the moderators. Again, this is pretty straightforward. The cable networks have more time than they have programming, and so they’ll almost always want more debates. And individual moderators or questioners gain recognition and prestige.

What we can conclude from all of this is that in most cases the pressure for more debates – from broadcasters, from potential moderators, from potential hosts, and most of all from all the candidates except for the front-runner – is probably greater than the pressure for fewer debates. And that there’s probably no equilibrium; without intervention, those who want more will just keep wanting more. That’s why it makes sense that the formal party, the Republican National Committee, is stepping in to try to reduce the number.

That they’ve done it by tweaking the “liberal” press is no surprise, either, in a party that has made beating up on the press a major source of outrage (and fundraising) for over four decades.

And it’s hard to see that Republicans will lose much if they stick to Fox News. The truth is that very few swing voters will tune in for nomination debates; after all, they aren’t going to vote in Republican primaries. Indeed: Most swing voters pay relatively little attention to politics; they aren’t going to be affected by anything that candidates do at this stage. About the only advantage or disadvantage in venue is that one of the party actor goals – getting candidate commitments on issues that are important to the party – might be marginally easier to do with moderators who are better tuned in to what those issues might be.

That said, it would clearly be nuts for Republicans to further elevate Rush Limbaugh or other loose cannons. It’s not just that Limbaugh might say something massively unpopular during a debate; it’s that Limbaugh and those in his position, left and right, have no constraints on openly taking sides, and that therefore candidates would be forced to grovel to him for months leading up to the debate. Well, even more than they have to do now. That’s really the best reason to stick to the “neutral” press or the relatively neutral-acting portions of Fox News – it avoids putting someone who can act as an open advocate in a position where he or she would have considerable leverage over the candidates, but little reason to act as a proxy for (other) party actors.

Other than that, however, it probably makes very little difference whether Republican debates are on Fox, MSNBC or any other channel.