Sustainable seafood is a fantasy 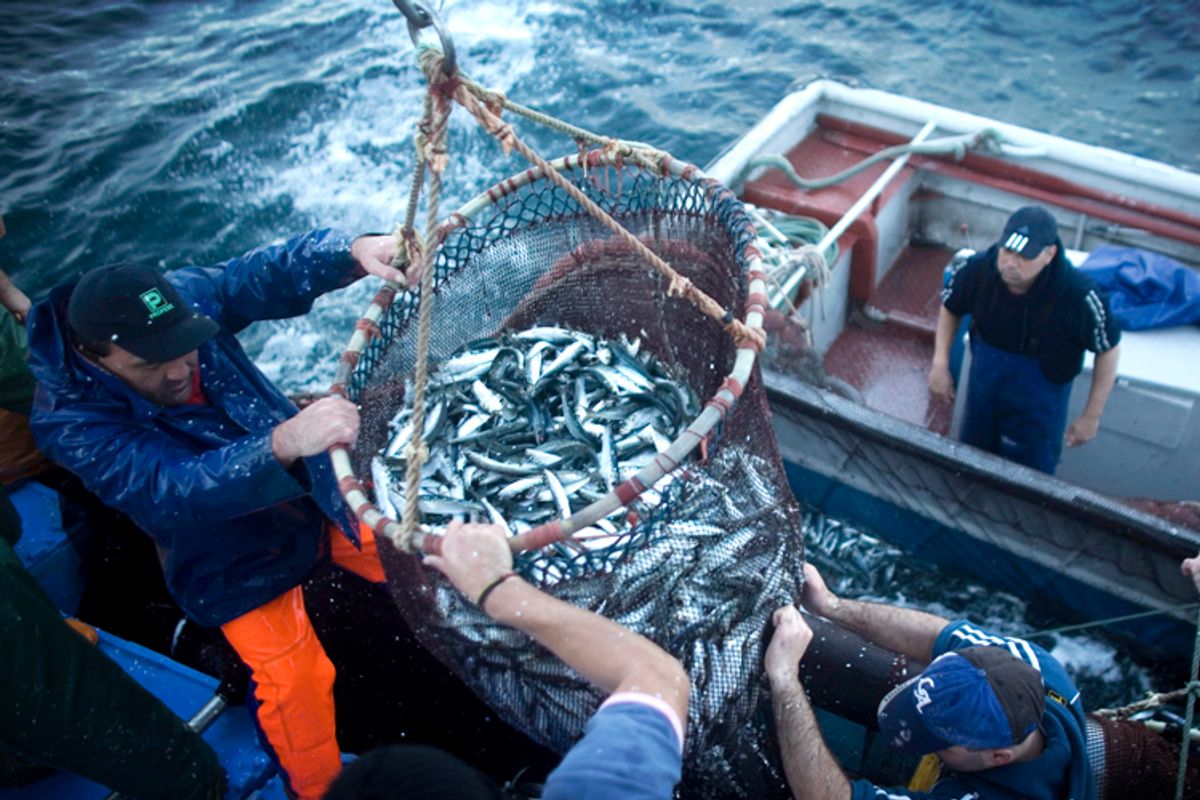 Consumers have proven that they can hear about the horrific factory farms and still eat chicken for dinner. Personally, I find it hard to feel sympathy for animals, but I became a vegetarian after seeing enough evidence of the huge environmental impact of meat consumption, and some worrying predictions about antibiotic resistance, to convince me it was the responsible thing to do.

Almost four years later, I don’t really crave white or red meat. But I have welcomed fish back into my diet. I missed seafood, and was swayed by the health benefits of omega-3s. Fish makes you happy, it keeps you young, and it tastes really good.

I also felt assured I’d be able to limit my diet to sustainable fish. I downloaded the Monterey Bay Aquarium Seafood Watch app to my iPhone. And on my first night as an official pescetarian, at a Japanese restaurant, I confidently whipped it out to look up the fish options on the menu.

It immediately became clear that I didn’t have much to work with. I wanted the sea bass, but, as I remember it, the menu left it at that. Sea bass. Was it Asian, European or Chilean? Farmed or wild caught, and by longline or gillnet? According to my app, the bass could be either very sustainable  or the worst thing I could possibly order, denoted with a big red dot. As my companions asked our waiter about the size of their portions or details of the daily special, I politely inquired if he knew where the fish came from. He told me he did not.

Ecologist Carl Safina, a writer and the founder of Blue Ocean Institute, developed the first sustainable seafood guide in the late 1990s. Before that, there was really no such thing as “sustainable” seafood: “If a piece of fish landed on your plate, you just ate it,” he said. “It was like bread. You didn’t talk about it.”

When we talk about sustainable seafood these days, we’re mostly concerned with whether a population is being overfished. According to the United Nations’ 2012 “State of World Fisheries and Aquaculture” report, about 85 percent of the world’s fish stocks are fully or overexploited, depleted or recovering from depletion. We no longer take it as a given that there are plenty of fish in the sea, and some go so far as to suggest that our generation may be the last to enjoy seafood.

The creators of consumer guides to sustainable seafood, of which there are now many, pay careful attention to overfishing. They also look at whether the methods used to catch fish are harming the aquatic habitat, and if they cause a lot of bycatch – the inadvertent snaring of unwanted fish, dolphins and sea turtles. Some of the guides investigate whether fisheries are well-managed. Other factors, like how suppliers deal with waste and whether they use harmful chemicals, are often taken into consideration as well.

“Consumers making the conscious choice to try and buy more sustainable seafood is an important first step,” Tim Fitzgerald, a senior policy specialist who runs the Sustainable Seafood Program at the Environmental Defense Fund (EDF), told me. And these organizations do seem to be doing everything in their power to arm consumers with the tools they need to make these choices. The EDF, for example, takes the extra step of providing a version of its guide written in the language of sushi. (When you order “tako,” what you’re getting is octopus, which, by the way, is a very bad choice.)

But in many cases, providing enough information for the consumer to make a truly informed decision is next to impossible. For instance, while there’s a clear distinction between Pacific and Atlantic salmon – Atlantic is always farmed and thus, always bad – whether my Monterey Bay app categorizes my Pacific salmon as a “best choice” or a more cautious “good alternative” depends on how it was caught. There’s really no way, said Safina, for me, or even the restaurant or supermarket I’m purchasing my fish from, to know that.

I wasn’t able to get in touch with the Monterey Bay Aquarium to talk about the way in which they see their guide’s ultimate utility. However, I noticed an extra “consumer note” attached to its entries on salmon. “Buyer beware!” it reads. “Different species of salmon are sold under many market names – and several are available from farmed and wild sources.” Wild and farmed salmon, said Fitzgerald, are among the most commonly mislabeled products. Call a fillet “wild,” after all, and you can sell it at a premium.

“You can’t rely on anybody selling you fish to be truthful 100 percent of the time,” Safina said. This isn’t limited to how the fish are caught; the sustainable option you pick might not be sustainable at all, because it’s an entirely different fish.

In a sweeping investigation of seafood fraud, the international organization Oceana used DNA testing to uncover mislabeling at restaurants and grocery stores “both in the United States and abroad at levels ranging from 25 to more than 70 percent.” Farmed tilapia masqueraded as red snapper, overfished Atlantic halibut claimed to be from the Pacific, and mercury-rich escolar passed itself off as white tuna. Sushi, according to their report, is a particularly dicey product. When you order a roll, they found, you’re more likely than not getting something different from what it says on the menu, especially if it says snapper or tuna. Of the 1,200 samples from 21 U.S. states that were tested, snapper was snapper only 13 percent of the time.

“Even if every consumer had a seafood guide or the issue of sustainability in their mind, ideally we’d want every place that sells fish to have done this work for them,” said Fitzgerald.

The website Fish2Fork takes this approach, reviewing restaurants based on their commitment to sustainability and the quality of information they provide to diners. It launched in 2009 through the Blue Marine Foundation as a legacy project of “The End of the Line,” a documentary about overfishing. “Firstly, we want to show consumers what they should be looking for in a restaurant, and to highlight what efforts restaurants make to be sustainable,” Lewis Smith, the site’s editor, explained to me in an email. “Second, we try to show restaurants themselves where they can improve, hopefully putting pressure on the sector to become more sustainable.” Their utility for the average diner, however, is limited: They’ve reviewed about 1,000 restaurants in Europe, and considerably fewer in the U.S.

As for supermarket shopping, Fitzgerald and Smith both referred me to the Marine Stewardship Council’s certification system: A blue label with a big check mark is stamped onto seafood from wild fisheries that meet its sustainability standards. (The Aquaculture Stewardship Council does the same for farmed fish.) Kerry Coughlin, the MSC’s Regional Director for the Americas, says consumers can be very confident that fish with their seal – about 13 to 14 percent of the world’s wild-caught supply – is sustainable. Their global standards were set after two years of dialogue involving hundreds of scientists, academics, conservation organizations and industry experts. Assessments of fisheries – contracted out to independent third-party certifiers – involve a team of scientific experts whose work is peer-reviewed. Independent certifiers also conduct tracebacks through the supply chain.

“We have a system that is very well designed with checks and balances, and then there are yet external checks and balances on top of that,” Coughlin told me. “So consumers really can put a high degree of faith, when they see the MSC blue ecolabel, that that fish is actually the fish that it’s labeled, and from a fishery that’s certified sustainable.”

The effort the MSC puts into following fish through the supply line and remaining independent from special interests underscores the complexity behind the “sustainable” label. But it’s easy for retailers to make claims that aren’t backed by that kind of verification. Critics use the term “bluewashing,” to refer to claims exaggerating seafood’s sustainability. According to Coughlin, this could mean the anything from criminal acts like relabeling fish to sell at a higher price to “the chef who’s very well-intentioned… who talks to their certifier about it – or their certifier talks to their supplier – and in the end, so often, people just say, ‘Oh, yeah, yeah, I talked to so-and-so and they said it was.’ And really there’s no way of knowing.”

“There are just a few sellers that I think are really committed to sourcing well and to understanding what they’re selling,” Safina told me. The Blue Ocean Institute has partnered with Whole Foods Market, which personally visits its seafood suppliers to verify first-hand that they’re engaging in sustainable practices. Otherwise, he said, they “haven’t been really willing to endorse a lot of people who make those claims.”

For better or for worse, I’m not a zealot. I don’t go to protests or talk people’s ears off about sustainability issues (although that’s beginning to change now that I’m covering the topic for Salon). When I wasn’t eating seafood at all, it was easy to just avoid the issue. But as soon as I became a “principled” fish eater, I became overwhelmed with factors to consider. Confrontation became hard to avoid. At restaurants, and while shopping, I couldn’t avoid becoming “that girl,” the kind they parody on “Portlandia.”

And so, much more quickly than I’d like to admit, I stopped asking questions. I still don’t eat a ton of fish, but when I do, I order what looks good. A few weeks back, I deliberately forgot what I’d once read about sushi’s complicity in destroying the ocean floor and ate a crunchy salmon roll.

Safina, I was surprised to hear, does eat seafood. But he’s figured out his own way of sticking to his principles: Most of what he eats, he catches himself. “I can remember buying fish like, once in the last twenty years,” he told me. He eats some sushi, too, just not tuna or anything his guide would classify as a bad choice.

For people like me, who live in cities and don’t have the time or inclination to cast out a line, indifference can come to feel inevitable. It’s a problem that comes up with most “green” issues, involving a big picture that’s hard to see from one’s own small-impact, individual perspective. Another thing Safina said, which I didn’t at first understand, is that he was disappointed by how popular his guide, and its many imitators, was:

It would be even better, in my opinion, if people wanted to appreciate fish for everything that they actually are. Mainly they’re animals, and they have lives and they live in the ocean and they interact in incredibly interesting ecological ways. And most people have really no interest in any of that. They just want to know, ‘If it hits my plate, should I eat it?’ … They miss everything else that there is about fish, and the whole living world really, that makes them so interesting and beautiful and wondrous.

In other words, the guides are like a CliffsNotes version of an issue that’s much bigger than anything we do or do not decide to put in our mouths. Perhaps if we all saw the ocean and its inhabitants the way Safina does, trying to do better by them would seem less of a burden.