A massive industry profits off the government-induced fear of terrorism 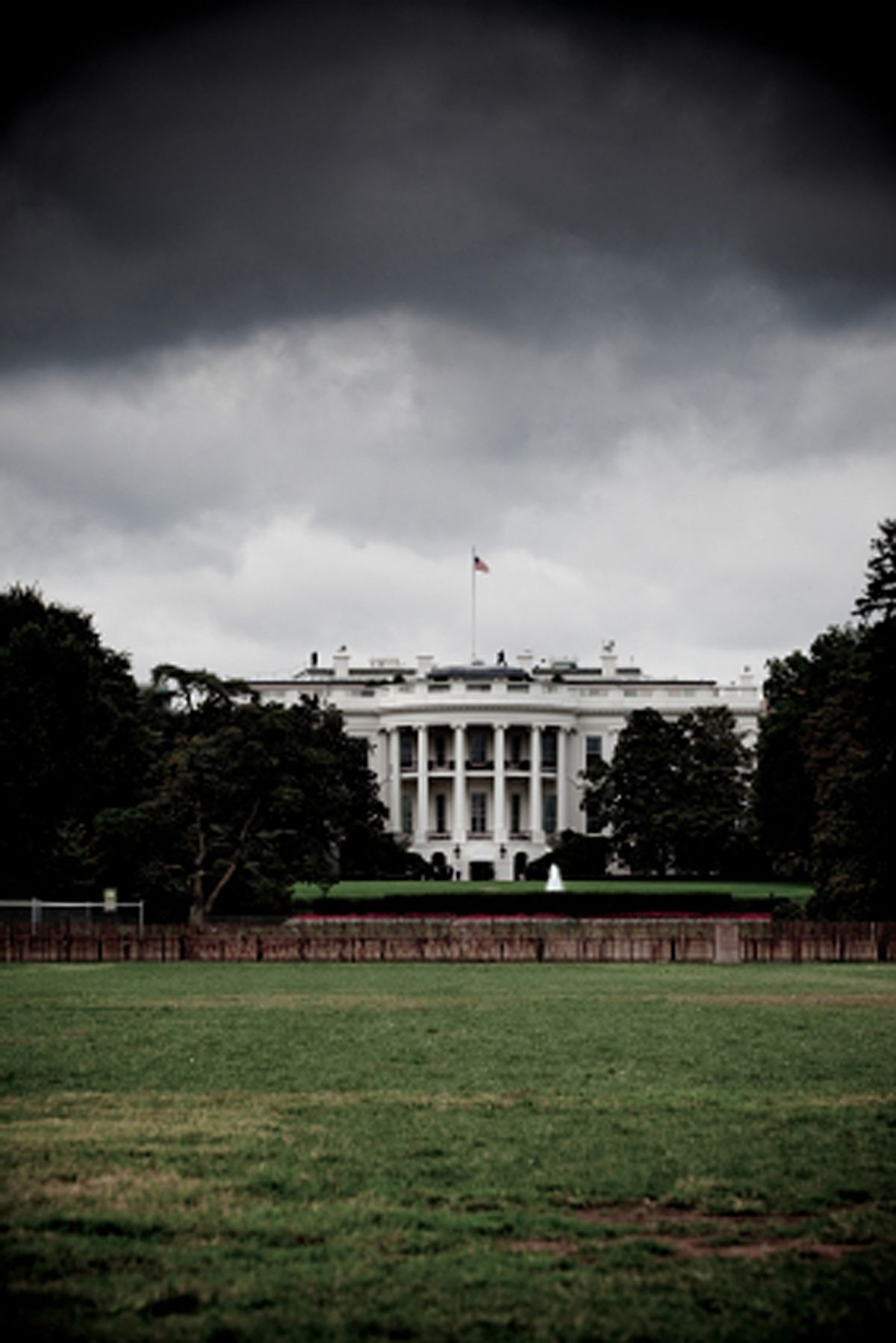 Michael Hayden, the former director of the National Security Agency, has invaded America’s television sets in recent weeks to warn about Edward Snowden’s leaks and the continuing terrorist threat to America.

But what often goes unmentioned, as the Guardian’s Glenn Greenwald pointed out, is that Hayden has a financial stake in keeping Americans scared and on a permanent war footing against Islamist militants. And the private firm he works for, called the Chertoff Group, is not the only one making money by scaring Americans.

Post-9/11 America has witnessed a boom in private firms dedicated to the hyped-up threat of terrorism. The drive to privatize America's national security apparatus accelerated in the aftermath of the terrorist attacks, and it’s gotten to the point where 70 percent of the national intelligence budget is now spent on private contractors, as author Tim Shorrock reported. The private intelligence contractors have profited to the tune of at least $6 billion a year. In 2010, the Washington Post revealed that there are 1,931 private firms across the country dedicated to fighting terrorism.

What it all adds up to is a massive industry profiting off government-induced fear of terrorism, even though Americans are more likely to be killed by a car crash or their own furniture than a terror attack.

Here are five private companies cashing in on keeping you afraid.

On Aug. 11, former NSA head Michael Hayden, the man at the center of the Bush administration's 2005 surveillance scandal, was defending his former agency on CBS News in the wake of the latest NSA spying scandal. Commenting on President Obama's halfhearted promises to reform some NSA practices, Hayden told host Bob Schieffer that “the president is trying to take some steps to make the American people more comfortable about what it is we're doing. That's going to be hard because, frankly, Bob, some steps to make Americans more comfortable will actually make Americans less safe.”

Former Homeland Security chief Michael Chertoff had a similar message when he appeared on ABC News Aug. 4. Speaking about the purported threat from an al-Qaida affiliate in Yemen that led to the closure of 19 U.S. embassies, Chertoff said that “the collection of this warning information [about al-Qaida] came from the kinds of programs we've been discussing about, the ability to capture communications overseas.”

CBS and ABC did not see fit to inform viewers that both Hayden and Chertoff are employees of the Chertoff Group, a private firm created in 2009 that companies hire to consult on best practices for security and combatting terrorism. Some of the companies the firm advises go on to win government contracts. Chertoff is the founder and chairman of the group, while Hayden serves as a principal. So they profit off a war on terror they say is crucial to keeping Americans safe.

Though it's unclear how much in total the firm makes, there are some known numbers. After the failed attempt in 2010 to blow up an airliner on Christmas Day with a bomb hidden in underwear, Chertoff pushed for better airport security procedures. One of the suggestions Chertoff made was for the Transportation Security Administration to use full-body scanners like the ones Rapiscan, one of the Chertoff Group's clients, made. And sure enough, after the Christmas Day plot, the TSA ordered 300 Rapiscan machines. The Huffington Post reported that Rapiscan made $118 million from the government between 2009 and 2010.

This private intelligence contractor has become a household name in the wake of the NSA scandal. Edward Snowden, the man responsible for leaking secret documents that exposed the breadth of NSA surveillance, was working for Booz Allen when he downloaded the documents he handed off to media outlets. As the New York Times reported in June, the company parlays its technology expertise for intelligence uses into massive government contracts. Thousands of employees of the company provide services to the NSA, like analyzing the massive amounts of data the government agency collects every day. The company is also the shining symbol of the government-private security complex's revolving door: Its vice president is the former director of national intelligence, while the current director of national intelligence is a former employee of Booz Allen.

Despite the Snowden security breach, Booz Allen continues to work with the government. And they're making a lot of money from the U.S. In the last fiscal year, the company made $1.3 billion from working in U.S. intelligence. In total, Booz Allen Hamiltion made over $5 billion last fiscal year. And the cash keeps coming: In January, the company announced that it had won a contract with the Defense Department to provide intelligence services. The amount of money it could make from the deal is up to $5.6 billion.

And like Hayden and Chertoff, Booz Allen's vice president Mike McConnell has publicly hyped up the threat of terrorism to blast Snowden's leaks. McConnell told a government contracting conference in July 2013 that Snowden's leaks have done “irrevocable damage” to the U.S.'s ability to stop terrorism. “It’s going to inhibit our ability to understand nuclear activity in North Korea, what’s going on in Syria, what might be happening with the Taliban in Afghanistan,” said McConnell.

Sometimes referred to as “NSA West” because so many former NSA employees go on to work for the formerly California-based Science Applications International Corp. (SAIC), this firm makes a ton of cash off government contracts. And they do so by hawking their expertise in combatting the terrorist threat.

Browse through SAIC's website and you're constantly greeted with the words “terrorist threat” and information on how the SAIC can help the government and others battle it. SAIC developed a “Terrorism Protection Manual” for Florida law enforcement that was developed to fight “today's national terrorist threat and implement recommended security best practices.” They boast of their “experience meeting the terrorism incident response training needs of a wide variety of customers, from training for a national Weapons of Mass Destruction (WMD) scenario, applicable at agency response levels, to lesser levels of incidents affecting a city, a military installation or a special facility.”

Back when John P. Jumper, the current CEO of SAIC, was an Air Force general, he said the threat of terrorism is “greater than Nazism, greater than communism. This threat that we have of terrorist zealots is the most dangerous because these are people who care nothing about life. They care nothing about our lives, for sure, and they care nothing about their own lives.” And Larry Prior, a U.S. intelligence veteran who used to run the company's Intelligence and Security Group, said in an internal newsletter that “the future of the nation rests on their backs,” referring to employees in his group.

SAIC is an immensely lucrative and large company. It boasts 42,000 employees — 20,000 of whom hold U.S. government security clearances. It is the NSA's largest contractor, according to CorpWatch, and is deeply involved in the NSA's collection of intelligence. Last year it reported a net income of $525 million.

4. Center for Counterintelligence and Security Studies

U.S. intelligence agencies aren't the only sectors of government where the private sector has cashed in on the fear of terrorism. The post-9/11 world has seen the blossoming of a cottage industry of self-styled “experts” on Islam from private companies that market their supposedly ironclad analysis of the threat from Islamists to other federal agencies and state and local law enforcement. These companies have profited from law enforcement taking part in the “war on terror.”

Through Homeland Security grant programs like the State Homeland Security Program and the Urban Areas Security Initiative, the federal government has doled out over billions of dollars to these private companies to provide Islamophobic training. One of these companies is called the Center for Counterintelligence and Security Studies.

Based in Virginia, the center “posits radical Islam as a new global ideological menace on the order of the old communist threat from the Soviet Union,” as Political Research Associates (PRA) noted in a 2011 report on private firms doing counter-terror training. Staff members include former FBI, CIA and Defense Department personnel.

Their claim to fame is providing education and training to members of the U.S. national security community — including law enforcement agencies, according to their website. They say they have trained over 67,000 people over the past decade.

It's unclear exactly how much this firm makes per year. But according to the PRA report, a five-day course for government employees on the “Global Jihadist Threat Doctrine” costs $39,280. The firm also lists the costs of individual courses on their website. For a 30-person class titled “Dying to Kill Us: Understanding the Mindset of Suicide Operations,” the cost is $7,856. For a three-day course for 30 people on “Informant Development for Law Enforcement to FighTerrorism,” the cost is $23,568.

The training pushes anti-Muslim ideology. On the section of their website where they list feedback from participants of the courses, one wrote: “An eye-opener. Especially how many Muslim Brotherhood front organizations there are and that the government doesn’t get it.”

Security Solutions International is yet another private firm hawking anti-Muslim training to law enforcement. This Miami-based company founded in 2004 uses its Israeli security connections to boost its standing in the market. They use Israeli security trainers in their courses and their president, Henry Morgenstern, is a dual Israeli-U.S. citizen who says he “developed excellent high level contacts with the Security Establishment [in Israel], making SSI the premiere training company for counter-terror related subjects.”

The company has trained over 700 law enforcement agencies since 2004. Officials from law enforcement agencies like the Massachusetts Bay Transportation Authority and the Department of Homeland Security have participated in the conferences they put on for profit. While SSI claims that they don't cast aspersions on the whole of Islam, an examination of their trainings, conferences and the speakers they use indicate otherwise.

At a 2009 conference sponsored by Police magazine, an SSI instructor who is the company's “expert” on Islam used a video that showed a terrorist beheading a hostage. After the course was met with criticism, the company's CEO said “their religion got linked to terrorism a long time ago.”

The conferences they hold are usually well-attended, and this year SSI is putting on a conference in Orlando, Fla., for three days. The cost for each attendee is $400. The keynote speaker this year is Steve Emerson, a well-known member of what's been termed the “Islamophobia industry.” SSI also makes money off its Counter Terrorist magazine. A yearly subscription is $35, and the company says it has 15,000 subscribers.