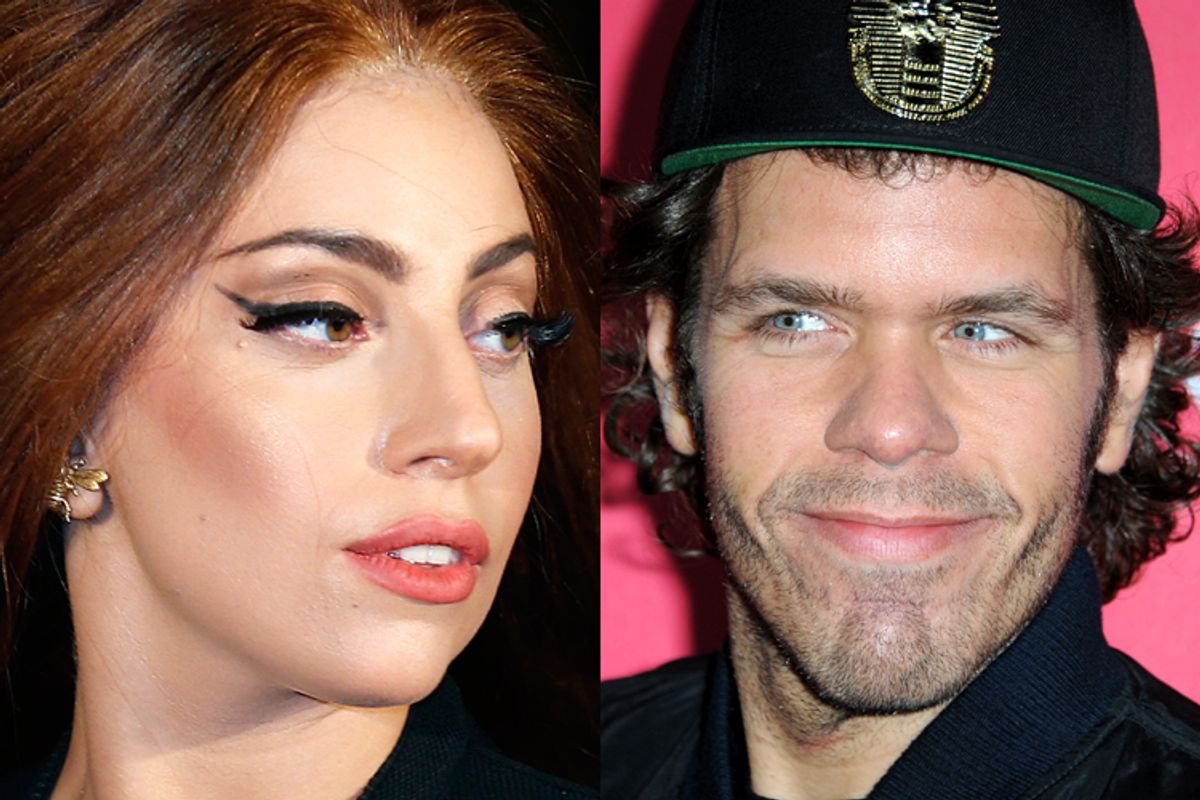 What if an argument happened and it wasn't on Twitter? What if two or more people engaged in a dispute and didn't drag everybody on the planet with Internet access into it? Because I have a feeling that'd be super refreshing.

The latest high-profile airing of grievances in 140 characters kicked off over the weekend, when a Twitter user announced that Perez Hilton had been spotted at Lady Gaga's New York City apartment building. Gaga and Hilton had already been sniping plenty on social media lately – with Gaga claiming on Twitter that Hilton had sent her a mocking text after her injury earlier this year, and Hilton using Twitter to gloat that Katy Perry has been beating Gaga on the Billboard charts. But after getting wind that Hilton was in the vicinity of her New York home, Gaga went into high Twitter drama mode, angsting in a series of tweets, "this is EXTREMELY EXTREMELY serious and if it is true i have to know… if he is still there please take a photograph…even from outside the window is fine. this is extremely serious… ok security is on the way over, and it will be handled. thank you for telling me, don't be scared." She then announced, "@perezhilton STAY AWAY FROM ME + MY FAMILY YOU ARE SICK TRYING TO RENT AN APARTMENT IN MY BUILDING TO STALK ME. LEAVE ME ALONE!!!" and "DO I NEED TO BE SHOT IT IN THE HEAD FOR PEOPLE TO UNDERSTAND THAT HIM AND EVERYONE ELSE THAT HARASSES ME HAS GONE TOO FAR? IM A HUMAN BEING."

By Sunday evening, Hilton had posted his version of events on his own site, saying that he'd been apartment hunting in the city and Gaga's was simply one of the buildings he'd looked at. He added that "I am a critic and not a 'stalker.'" This, inevitably, led to more Twitter spillover, with Perez accusing Gaga of "using a public forum like Twitter to address a private matter, just to get publicity for your song" and saying that "I'm still healing, removing your knife from my heart." Gaga hit back that "I will NOT handle this privately, the internet is just the surface of what the public sees. I've been quiet for a long time, not this time." In classic Twitter feud form, much of the exchange, which Uproxx rightly calls "insufferable," has since been deleted. Hilton has, however, left up an alarming bevy of retweeted death threats to him and his son, as well as a cryptic message that "I know some people are sick, and addiction will make you act up, but people need to take accountability for their actions!!!!"

The world is not always a soft and easy place, and there's plenty of room in it for debate and disagreement and even well deployed snark. Sometimes, an incredible back and forth on a hot-button issue will arise on Twitter, and the vigorous exchange between multiple participants can be a thing of beauty. And sometimes, a simple, well-aimed dis can brighten everybody's day. But what we now are left with in the post-Gaga-Perez battle is a bunch of crazy people hashtagging their "#OperationKillThePig" dreams of watching Perez Hilton die, and two high-profile individuals who have amply demonstrated that their preferred mode of communication is many, many exclamation points.

They've also now added their spat to a long and self-involved, deeply unsatisfying pantheon of public meltdowns. Whether it's LeeAnn Rimes vs. Brandi Glanville or Roseanne vs. Tom Arnold or Chris Brown vs. everybody, Twitter has become the go-to venue to attempt to drum up supporters in one's beef du jour. Look at me! I've been wronged! And I need to turn my ax-grinding into a public performance – at least for a few hours until I think about it and then delete it! You know, at least when a brawl breaks out in the parking lot of the Applebee's, it's visually interesting for all the onlookers. The celebrity Twitter fight is now the hands-down most narcissistic use of the most narcissistic form of communication ever invented.

Imagine if Gaga, feeling perhaps truly concerned for her safety, had just responded directly to the person who said he saw Hilton at her building. Or – consider this – imagine if she or even someone in her employ contacted Hilton himself about it and asked what was going on. What a novel, grown-up, undramatic concept! What if, when someone like Amanda Bynes picks a fight, someone else doesn't run with it? There would still be plenty of other viable ways of hating on one's foes, but we'd have fewer death threats and creepy drive-by trolling, for starters. We'd have a slightly less idiotic, tantrum-fueled online environment, all around. Sure, a truly good fight between two worthy opponents can be compelling, but the Hollywood Twitter spat is now well beyond being a worn-out cliché. It's worse than that --  it's just a gross abuse of caps lock.