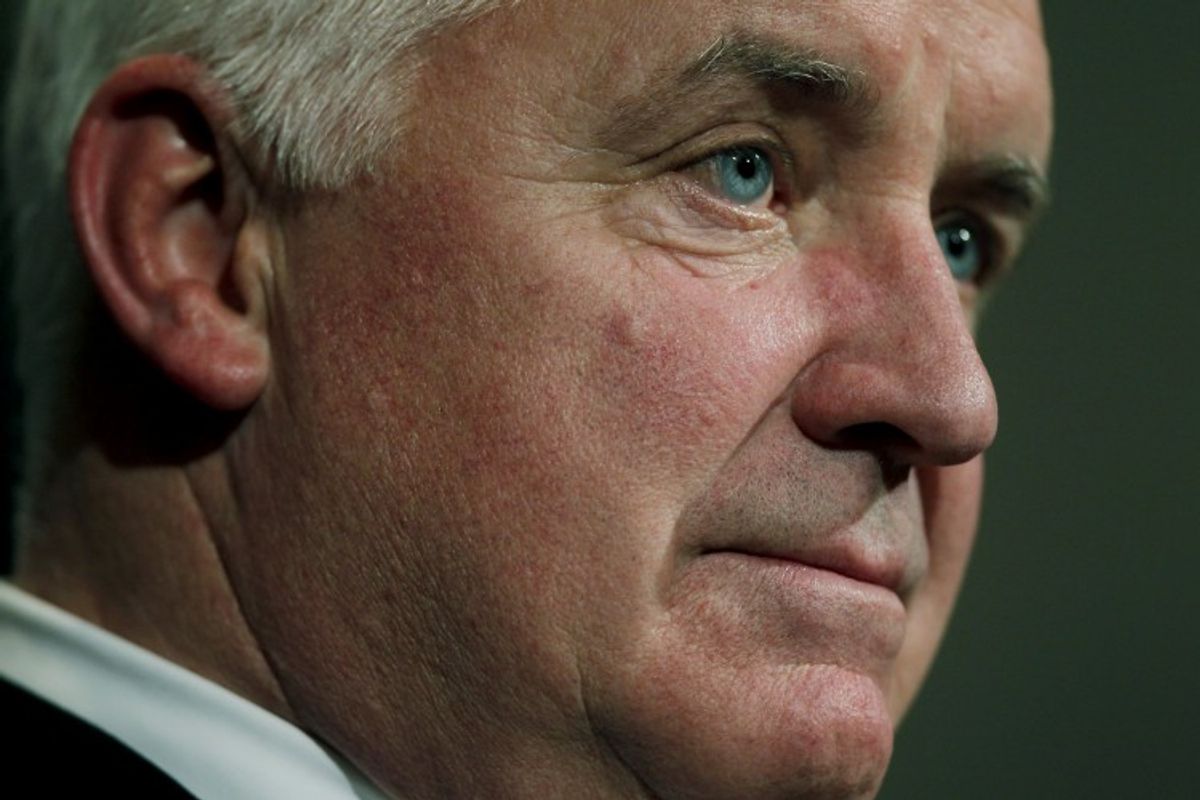 Want to see a public school system in its death throes? Look no further than Philadelphia. There, the school district is facing end times, with teachers, parents and students staring into the abyss created by a state intent on destroying public education.

On Thursday the city of Philadelphia announced that it would be borrowing $50 million to give the district, just so it can open schools as planned on Sept. 9, after Superintendent William Hite threatened to keep the doors closed without a cash infusion. The schools may open without counselors, administrative staff, noon aids, nurses, librarians or even pens and paper, but hey, kids will have a place to go and sit.

The $50 million fix is just the latest band-aid for a district that is beginning to resemble a rotting bike tube, covered in old patches applied to keep it functioning just a little while longer. At some point, the entire system fails.

Things have gotten so bad that at least one school has asked parents to chip in $613 per student just so they can open with adequate services, which, if it becomes the norm, effectively defeats the purpose of equitable public education, and is entirely unreasonable to expect from the city’s poorer neighborhoods.

The needs of children are secondary, however, to a right-wing governor in Tom Corbett who remains fixated on breaking the district in order to crush the teachers union and divert money to unproven experiments like vouchers and privately run charters. If the city’s children are left uneducated and impoverished among the smoldering wreckage of a broken school system, so be it.

To be clear, the schools are in crisis because the Commonwealth of Pennsylvania refuses to fund them adequately. The state Constitution mandates that the Legislature “provide for the maintenance and support of a thorough and efficient system of public education,” but that language appears to be considered some kind of sick joke at the state capital in Harrisburg.

It’s worth noting that the state itself runs the Philadelphia School District after a 2001 takeover. The state is also responsible for catastrophic budget cuts two years ago that crippled the district’s finances. And in a diabolical example of circular logic, the state argues that the red ink it imposed, and shoddy management it oversees, are proof that the district can’t manage its finances or its mission and therefore shouldn’t get more money.

Make no mistake, on the aggregate the district does not perform well. Only slightly more than 60 percent of students graduate from high school, with less than 60 percent proficient in reading and math. But put that in the context where 80 percent of students come from disadvantaged backgrounds while administrators struggle to cobble together enough cash to even open doors, let alone provide a safe, rich and comprehensive educational experience.

Particularly noxious lawmakers are fond of spouting the ridiculous notion that money can't help struggling schools, as if more and better-trained staff, better equipment and diverse programming wouldn't make a difference in kids' educations and their lives.

The timing of this meltdown is unfortunate, as if there were ever a good time for the euthanasia of public schooling. According to the 2010 census, Philadelphia grew in population for the first time in 60 years, changing direction from decades of decline. Most of that growth came from immigrants who will rely on public schools — or not, as the case may be. Another area of growth was in young families, who will face a choice, once they have school-age children, to stay in the city or flee to superior suburban schools as previous generations have done.

Nearly the entire burden to keep the district afloat has fallen to the city, which raised property taxes each of the two previous years specifically to funnel extra money that the schools weren’t getting from the state. This is in one of the poorest and most highly taxed cities in the nation.

The floundering district is both a symptom and cause of the city's predicament, creating a vicious cycle of people who can afford to bail moving to the suburbs, leaving a crippled tax base, with the result being less money to fix the schools and ever-higher taxes imposed on those who stay.

Unlike the city, the state could come up with the necessary cash without excessively burdening its finances. Pennsylvania has the lowest severance tax of any state drilling for Marcellus shale gas, with plenty of room for an increase. The state had a modest surplus at the end of the last budget year. The governor has no trouble coming up with money to build new prisons, which will serve as future homes for all too many children of Philadelphia who are being failed and tossed aside by adult leadership, if you can call it that.

The pattern has become clear: defund the schools, precipitate a crisis and use that as an excuse to further attack the schools, pushing them closer and closer to a point of no return. The $50 million to open the schools this year is just the latest and most immediate example of three years of brinkmanship.

The district was hit with a double whammy in 2011, when stimulus funds that it had idiotically been using for operating expenses dried up, and incoming Gov. Tom Corbett took office eager to prove his reactionary bona fides by enacting massive budget cuts to public education to the tune of $1 billion statewide, disproportionately hitting Philadelphia. The result was an absurd $629 million shortfall, which was filled by a mix of cuts and city tax hikes.

Last year, the district took out a $300 million bond to patch another big deficit, the very definition of a band-aid fix as it only added to what is now $280 million in annual debt payments.

This round of budget hysteria kicked off in May when the superintendent announced that the district was another $304 million in the hole for the upcoming school year and requested extra funding from the city and state as well as givebacks from the teachers union to fill the gap.

To prepare, he laid off nearly 4,000 teachers and staff members, and closed 24 schools, after the district had shut eight the year before. Empty buildings and mass layoffs — the perfect image of 21st century education.

The city and state came up with a Rube Goldberg device of funding worth about $140 million, composed of repurposed federal funds, better city tax collections, borrowing against future city taxes and a whopping $2 million thrown in by the state beyond what it had already committed.

Most of even that inadequate amount hasn’t arrived yet as the state sits on $45 million in federal money it refuses to disperse until the teachers agree to enormous salary cuts and rollback of other benefits and city officials bicker among themselves on how to deliver the money they promised.

It’s still unclear what, if anything, will be kicked in by the teachers, who already make disproportionately less money than their suburban counterparts while teaching in much more challenging environments. Their contracts expire at the end of the month.

Leering over the whole mess is the controversial charter school movement, which siphons $675 million from district schools. The charter experiment has been a mixed bag, with some performing well, others proving mere vehicles for graft and corruption. Critics see them as a way to divert public money into politically connected private hands, and even more important, a way to break the teachers union because they aren’t bound by district collective bargaining rules.

It’s not hard to see the same forces at work here as those taking apart public sector unions in Wisconsin and trying to confiscate Detroit city employees’ pensions in Michigan. Indeed, the district leadership met Thursday to unilaterally suspend the school code to get around teacher seniority and automatic raise rules as they use the $50 million to rehire some of the employees laid off earlier this year.

Teachers are understandably displeased at being blamed for a problem the state has caused. "It is Commonwealth of Pennsylvania's obligation to fully fund public education. Yet the budget office seems to be employing any and every means to avoid living up to this responsibility," Philadelphia Teachers Federation president Jerry Jordan said in a statement. "Chronic lack of resources has brought this crisis to our schools, not work rule provisions in collective bargaining agreements.”

“The trunk of my car is now filled with a carton of paper, pens, lined paper, and copybooks I have bought for my students this September,” district teacher Christine MacArthur wrote in an editorial to the Philadelphia Inquirer. “Now we are also to pay for the mistakes of our employers?”

Parents and students are trying to push back, but may ultimately have little traction. Thousands of students led by the Philadelphia Student Union walked out last spring to protest the doomsday budget, to no avail. Now, with the stark projections of May becoming reality in August, members are canvassing the streets to rally support. "I'm just doing it for my school because it's the right thing to do," one student told a local television station. "We are going to need counselors. Without counselors, it's going to be hard to get into college." The group is considering boycotting school entirely if the district doesn’t get the money it needs.

“It’s indescribably insane,” says Helen Gym of the advocacy group Parents United for Public Schools, who has three children in the public school system. “It’s unbelievable that it’s come to this.” The group put out a statement Thursday reemphasizing that $50 million was far from enough to have effective schools.

The district got its $50 million, though, and will get more in dribbles and drips. That will barely, not really, suffice for inadequate schooling this year. Next year, stay tuned for a repeat. Barring an unforeseen economic renaissance in the city or thorough overhaul of the state executive and legislative branches, the district is poised for year after year of one crisis after another.

Parents and teachers are all too aware of what’s happening. “Tom Corbett, the weakest governor in the United States, is trying to stake his claim on completely dismantling and starving one of the nation’s largest school districts into dysfunction and collapse,” says Gym.

The nails aren’t all in the coffin yet, but they are being pounded deeper every year by a state that has turned its back on, if is not openly hostile to, the idea of free and equitable education for all.

“It’s an absolute atrocious mockery of anything related to public leadership,” Gym says. “To not have a stable public school system is more devastating to Philadelphia than anything that has happened before.”