Pundits have accused Jay Z of ignoring his social responsibility, unlike Springsteen. But how different are they? 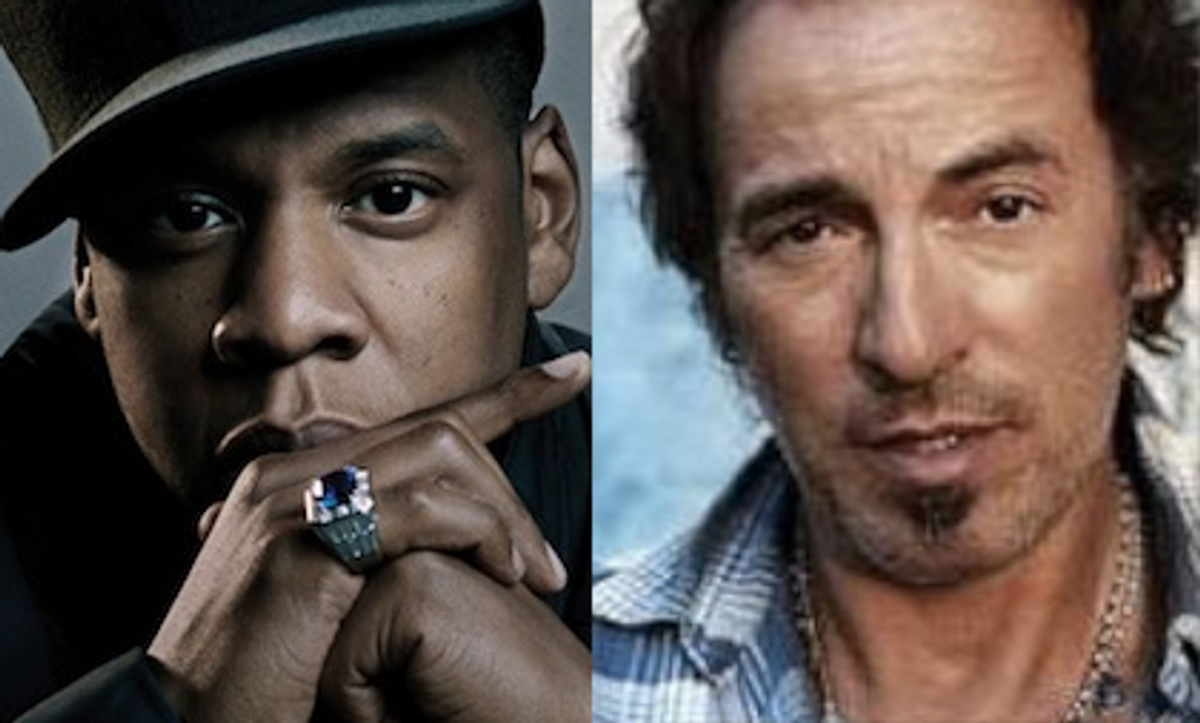 If Bruce Springsteen didn’t waste so much time bragging about his art collection and his animal magnetism, maybe he’d have more to say about the world around him — like that man of the people Jay Z. Am I right? … No?

As the media has now exhaustively established, Harry Belafonte sees it differently. In an interview with the Hollywood Reporter last year, the pioneering entertainer and social activist offered Jay and Beyoncé as examples of high-profile artists who “have turned their back on social responsibility” and went on to say, “Give me Bruce Springsteen, and now you’re talking. I really think he’s black.”

Never one to hold his fire when called out, Jay responded in song (“Mr. Day-o, major fail/Respect these youngin’s, boy, it’s my time now”) and in a subsequent interview of his own, in which Jay accused Belafonte of 21st century Uncle Tom-ism: “You just bigged up the white guy against me in the white media.” The one thing they seem to agree on is Springsteen; let the record show Jay thinks “Bruce Springsteen is a great guy.”

For the most part, the critics seem to be taking Belafonte’s side. Sasha Frere-Jones of the New Yorker has expressed grave disappointment in Jay’s new album "Magna Carta Holy Grail" and suggested his recent six-hour performance at a posh art gallery would have been better if he’d pulled a gun on the audience — something it’s difficult to picture Belafonte, or Springsteen for that matter, doing in his place. (On the flip side, it’s difficult to picture either Belafonte or Springsteen singing to the creative director of J. Crew and the cast of "Girls" for six straight hours.)

My intent is not to defend Jay or to weigh in on whether he should devote more bandwidth to fighting injustice. Rather, I’d like to ask: Is the difference between these two artists really as, er, black and white as it’s made out to be?

Both Jay and the Boss broke into the public consciousness as young men with stories to tell about the economically depressed places they called home.

Baby, this town rips the bones from your back
It’s a death trap, it’s a suicide rap
We gotta get out while we’re young.

I’m a block away from hell, not enough shots away from stray shells
An ounce away from a triple beam still using a handheld weight scale…
Where we call the cops the A-Team
’Cause they hop out of vans and spray things
And life expectancy so low we making out wills at eighteen.

In these songs, there is no mention of working to change social conditions in the old neighborhood. Rather, the emphasis is squarely on getting out. In “Born to Run,” Springsteen’s character clearly states he has no intention of ever going back. For his part, the Jay of “Where I’m From” accepts a degree of responsibility, promising God, “If I ever blow, I’d let ’em know/Mistakes and exactly what takes place in the ghetto.” Which is to say he chooses the path of chronicler rather than activist, the path both the rapper and the rocker have followed, more often than not, throughout their careers, even when it led them down the darkest of alleys.

From the town of Lincoln Nebraska with a sawed off .410 on my lap
Through to the badlands of Wyoming I killed everything in my path.

Come test me, I never cower
For the love of money, son, I’m giving lead showers
Stop screaming, you know the demon said it’s best to die
And even if Jehovah witness, bet he’ll never testify.

On the album "Nebraska," Springsteen inhabits a series of criminals and down-and-outers — including the mass murderer Charles Starkweather — offering little in the way of constructive commentary or hope of redemption. Jay Z has taken this approach repeatedly, from the “raging, money-obsessed sociopath” (as described in his memoir) of “D’evils” to the high-flying kingpin headed for a fall on the "American Gangster" album. In the work of both artists, you see the same commitment to putting a human face on violence, recognizing it as a consequence of hardship, even as in their personal lives they left hardship in the rearview mirror.

By the early ’90s, Mr. Born to Run had traveled a long way from the darkness on the edge of town (to a mansion in L.A., no less, with his wife and children). On the two albums he made during this period, he sounds listless and disconnected as he ponders the good life:

In another song, he imagines building a wall around said mansion to keep the gang wars in Compton away from his sleeping son, hardly a lefty call to action. No surprise "Human Touch" and "Lucky Town" got some of the worst reviews of his career, including the following assessment of Entertainment Weekly: “Perhaps Springsteen is trying to convince himself that behind his formidable bank account and fame, he is still that same rock & roll party animal and boardwalk poet. But he simply isn’t, and nothing drives home that point more than the records themselves.” Even the the New York Times balked at the new Bruce: “Springsteen is starting to sound like a man wrapped up in private preoccupations, running in circles.” (Bonus quote from the Times: “like the hip-hop he never acknowledges, his songs are pastiches…”)

Sound familiar? The critical response to "Magna Carta Holy Grail" (which Jay has characterized as his own meditation on the tolls of success) hits many of the same notes: “weirdly distant and safe”; “His hope is that nobody notices the well-moneyed family man with nothing left to say behind the rap-superstar curtain.” Guess how old Springsteen was when he released the equivalent albums in his own discography … 42, one year younger than Jay is now.

Springsteen seemed to feel the need for a course correction. He turned outward, to literature and newspapers, for inspiration. The result was "The Ghost of Tom Joad," a stark set of ballads about undocumented Mexican immigrants and Depression-era farmers. Since then, he has written songs addressing the Amadou Diallo shooting, the war in Iraq, and the aftermath of Katrina.

The thing is, Jay Z has rapped about all these subjects, too. I quoted “Minority Report,” his angry, self-questioning take on Katrina, at the top of this essay. Just like Springsteen, he hit the stage for Obama in 2008 and 2012. He may not give his undivided attention to matters of national importance, but then neither does Springsteen, who in recent years has toggled between topical broadsides and moon-eyed odes to “girls in their summer clothes” and “the queen of the supermarket.”

So what, exactly, has Springsteen done that Jay needs to do to win over Belafonte and like-minded commentators? Show us he’s embarrassed by his wealth? Cut an album of Pete Seeger covers? Maybe if we give him time, he’ll come back with his own "Ghost of Tom Joad," a collection devoted exclusively to the plight of people who are not Jay Z.

That would be an interesting move, for sure, but let’s not kid ourselves about the reception it would get. "Tom Joad" was the first Springsteen album in 20 years that failed to crack the Billboard top five. At least the critics gave him credit for his high-mindedness, right? Not as much as you’d think. Entertainment Weekly again: “[F]or all its nobility, The Ghost of Tom Joad still feels like a disappointing step back … If anyone could write about the lives of the middle class during the Republican Revolution and address the failed optimism of the Clinton years, it would be Springsteen. Yet almost none of these songs feel contemporary.”

Turns out, living up to expectations is an inexact science. In a 2012 Rolling Stone interview, Jon Stewart asked Springsteen how he deals with having “so many different constituencies that want so many different things from you.” His answer could serve as a levelheaded corrective to the Jay-Belafonte beef:

Whatever its flaws, "Magna Carta Holy Grail" has kicked the conversation between Jay Z and his audience (or at least a certain segment of his audience) into overdrive. Whether he’s done enough to make us care about his obsessions — his obsessions, not the ones we wish he had at a given moment — is, as far as I’m concerned, an open question. The answer will be a long time coming. If Springsteen’s trajectory is any indication — and it has been so far — we’ll still be looking to Jay to speak for us, airing our frustration when he doesn’t, 20 years from now.

Daniel Browne has written about culture, animals and the arts for the Oxford American, the Believer, the Bygone Bureau, and Identity Theory, among others. His fiction has appeared most recently in "40 Stories: New Writing From Harper Perennial," Drunken Boat and the Pinch. Visit him at http://daniel-browne.tumblr.com.