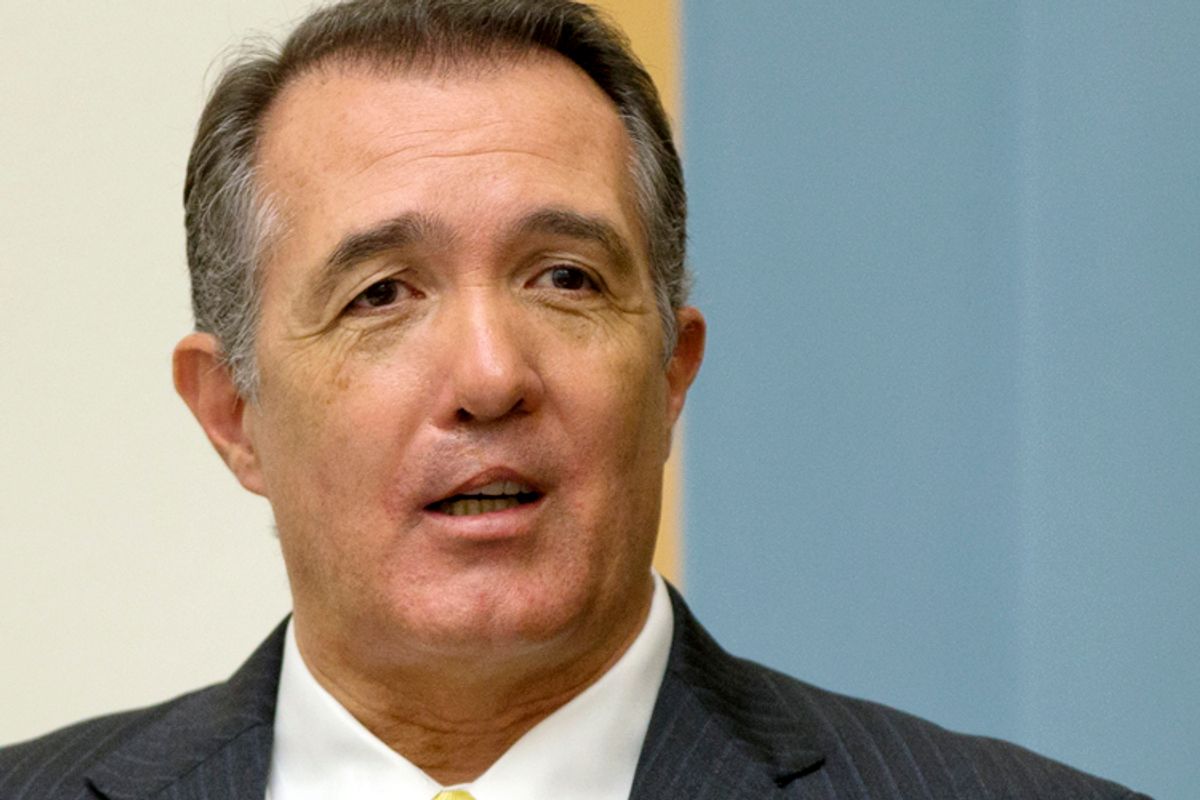 In May of this year, Miriam Yeung, the executive director of the National Asian Pacific American Women's Forum, joined with other groups to file a legal challenge against an Arizona law banning race- and sex-selective abortions. But it wasn't the first time she'd heard about a law like this. Five years earlier, Republicans were pushing a near-identical bill -- and they thought Yeung might just be its biggest fan.

It was 2008 when Yeung, who has worked at the intersection of the gender justice and racial justice movements for decades, received an unexpected phone call from Arizona Republican Trent Franks. "We’re dropping a bill you’re going to care about," Franks told her, "because we saw on your website that you care about son preference." Back then, Yeung didn’t yet know who Franks was, only that he was trying to sell himself as her new political best friend. Soon after their call, Franks sent Yeung the draft proposal for the bill he claimed was all about promoting gender and racial equality.

"And that,” Yeung told Salon with a sad laugh, “was the first time we got a glimpse of the Susan B. Anthony and Frederick Douglass Prenatal Non-Discrimination Act."

Franks' bill was a cynical attempt to use sex-selective abortion -- a practice that has resulted in skewed sex ratios in certain countries, particularly in East and South Asia, but is rare in the United States -- to force doctors to police their patients’ decisions. The bill required any doctor or nurse who suspected a patient was seeking an abortion because of the sex of her fetus to report her to authorities. Doctors who were believed to have performed an abortion for such a reason could be sent to jail. The bill, in effect, mandated doctors ask their patients aggressive and invasive questions to find out the "real reason" they were seeking an abortion or risk facing criminal charges, a process opponents of the measure argued would lead to the blatant racial profiling of Asian-American women and a chilling effect among providers.

The provision banning so-called race-selective abortions was even more confounding for advocates fighting the bill. A race-selective abortion ban is a solution without a problem, as Loretta Ross, national coordinator for SisterSong, noted: "It’s kind of hard to find evidence that a black woman is going to have an abortion because she’s surprised to find her baby is black. It just strains credulity to think that’s a problem. I mean, she wakes up in the morning and says, ‘Oh my god! My baby’s black?'" Refusing to buy Franks' lofty talk about human rights, opponents of the measure -- both within the social justice movement and Congress -- called out the provision as a blatant effort to stigmatize the personal choices of women of color. (Perhaps something about the bill’s co-sponsors, Michele Bachmann and Steve King, betrayed the fact that this bill was not genuinely about advancing a racial justice agenda.)

Franks' proposal died in the U.S. House of Representatives three times between 2009 and 2012. But rather than staying dead, Franks’ racially charged ban on abortion went where most bad ideas go to find a second life: Republican-controlled state legislatures.

Arizona’s law, faithfully modeled after Franks’ failed measure, also bans abortions based on the race of the fetus. When the state Legislature passed the ban in 2011, its sponsor, Rep. Steve Montenegro, argued that it "had less to do with a woman's legal right to have an abortion and, instead, was a measure to prohibit bigotry and discrimination." But try as they might to cloak the Prenatal Non-Discrimination Act in the language of human rights, the real intent of the ban's Republican backers was not lost on reproductive rights and racial justice advocates in the state.

In addition to restricting women’s access to abortion care by forcing doctors to racially profile women of color and scrutinize their medical choices, the Arizona law willfully stigmatizes one of the fastest-growing immigrant populations in the state. “The Asian-American population in Arizona grew 93 percent from 2000 to 2010," Yeung says, "and I think lawmakers, instead of welcoming new Arizonans and serving the new members of their community, are fanning racial prejudice and using bills like this to do so.”

The groups behind the lawsuit say that rather than fight the cultural and social norms behind son preference and promote gender equality, the law merely stigmatizes Asian-American women. “Our claim is that this bill was written with racial discrimination and prejudice at its inception,” Yeung explains. “While debating the bill, legislators testified in support of it by saying things  like, 'We don’t want those people bringing this stuff here, these values here.'”

In addition to racially coded language stigmatizing Asian-American women, the Arizona law accuses abortion providers of setting up shop in predominantly African-American neighborhoods as part of a scheme to coerce black women into having abortions. This is a popular anti-choice claim. But as Yeung notes, community advocates have long rallied to have reproductive health providers -- which, in addition to abortion care, provide low-cost contraception, cancer screenings and other health services -- in their neighborhoods.

And like most anti-choice legislation churned out under the mantle of women's health and rights, these laws have been denounced by a litany of American medical associations.

But the law remains on the books, and women's rights in Arizona continue to hang in the balance. The ultimate fate of Arizona's law remains to be seen while the lawsuit is still pending, though Yeung is hopeful that the court will agree that the law promotes racial bias and blatant discrimination and strike it down.

And in the meantime, if Franks or Montenegro ever really wanted to work to end racial and gender disparities in our culture, Yeung says she'd be more than happy to have that conversation, too. "I would welcome real efforts and real partnerships to fight gender inequity and racial discrimination," Yeung says. "But laws like this are not those efforts. If they want to address son preference, as NAPAWF truly does, the way to do it is not by stigmatizing women and taking away our rights."

If they want to value women, Yeung says, lawmakers should "work with us on pay equity, on education, on breaking stereotypes. But don't waste valuable resources on laws like this."