With nothing else left to loot in Detroit, creditors are eyeing a $2 billion art collection. That's a huge mistake 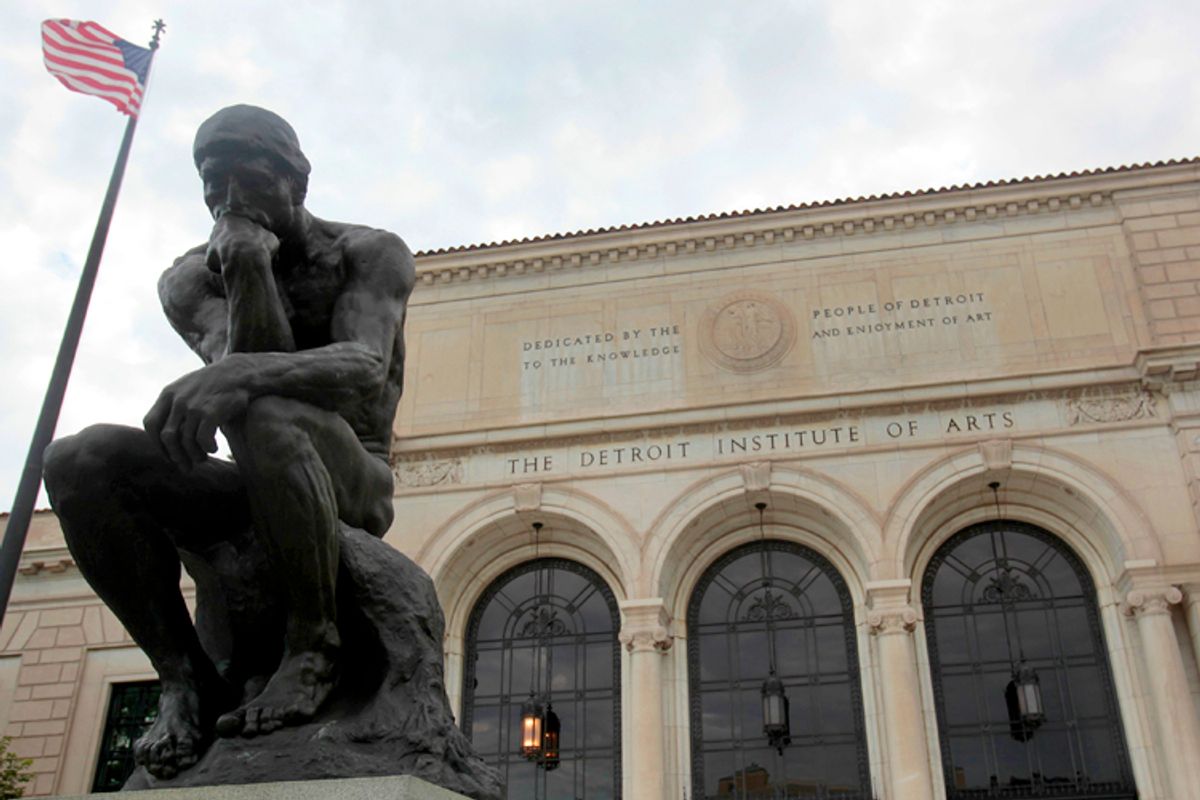 There’s not that much left to loot in Detroit. Even the copper pipe’s been stolen from the abandoned buildings. But Detroit does have one crown jewel left: the world-class art collection of the Detroit Institute of the Arts, estimated to be worth perhaps $2 billion. Not surprisingly, creditors are eyeing it hungrily. Appraisers from Christie’s have been spotted sizing up the collection.

The DIA collection should be off-limits for the city’s creditors. If Detroit is to be rebuilt, it needs a cultural base, not just an economic base. Cultural treasures are what separate great cities from exurban sprawl. Proximity to cultural treasures is also part of what makes living in a city attractive and part of the package Detroit needs to attract businesses and tourism.  Letting creditors liquidate the city’s cultural patrimony would doom Detroit to a stillborn restructuring, the ultimate in penny-wise, pound-foolish decisions. It would also be wrong legally.

Bankruptcy law has no provision that requires cities to sell their assets to satisfy creditors. Bankruptcy law generally starts with a baseline of liquidation; if a debtor wishes to reorganize it must provide creditors with at least as much as they would get in a liquidation. That principle, however, does not apply to municipal bankruptcies. Cities, unlike businesses, cannot be liquidated.  Furthermore, bankruptcy courts are prohibited from ordering municipal tax increases. All the more so, they cannot force the liquidation of municipal assets.

This has long been how municipal bankruptcy has been understood. The original municipal bankruptcy statute was titled “Provisions from the Emergency Temporary Aid of Insolvent Public Debtors and to Preserve the Assets Thereof" (emphasis added). The original law only provided for “municipal debt readjustments,” not municipal asset fire sales. Similarly, the current statute is titled “Adjustment of Debts of a Municipality.”

To be sure, Detroit could propose a restructuring plan that involves the liquidation of its art collection. But only if permitted by Michigan state law. State law must usually yield to federal law based on the Supremacy Clause of the federal Constitution. But municipal bankruptcy represents an exception to this rule.

Whether this means that states can condition municipal bankruptcies on complying with state law provisions — such as those of the Michigan constitution protecting pensions from cuts — is unclear. But it is axiomatic that federal bankruptcy law looks to state law to determine property rights, including what is or is not property of the debtor.  It is also clear that a municipal restructuring plan cannot be approved unless it complies with state law. Thus, if Michigan state law either clarifies that the Detroit Institute of Art’s collection is not simply municipal property or otherwise prohibits the sale of the collection, then the collection cannot be sold in bankruptcy. Already, the Michigan attorney general has issued a non-binding opinion that the art collection is not simple municipal property. Instead, the art is held in perpetual trust for the citizens of Michigan, so it cannot be sold.  Legislation affirming the attorney general’s opinion is moving through the Michigan Legislature.

Detroit’s creditors may complain that it is unfair for the city to hold on to a valuable asset while not paying them in full. The truth, though, is that liquidating the art collection would represent a giant windfall for creditors. No creditor ever relied on being able to seize the DIA collection when extending credit to the city.

Sacrificing Detroit’s art would be an urban planning mistake of the first order that would unjustly enrich creditors. It doesn’t have to happen. Michigan can, and should, take the legal steps necessary to prevent this from happening.

Adam Levitin is a Professor of Law at Georgetown University.