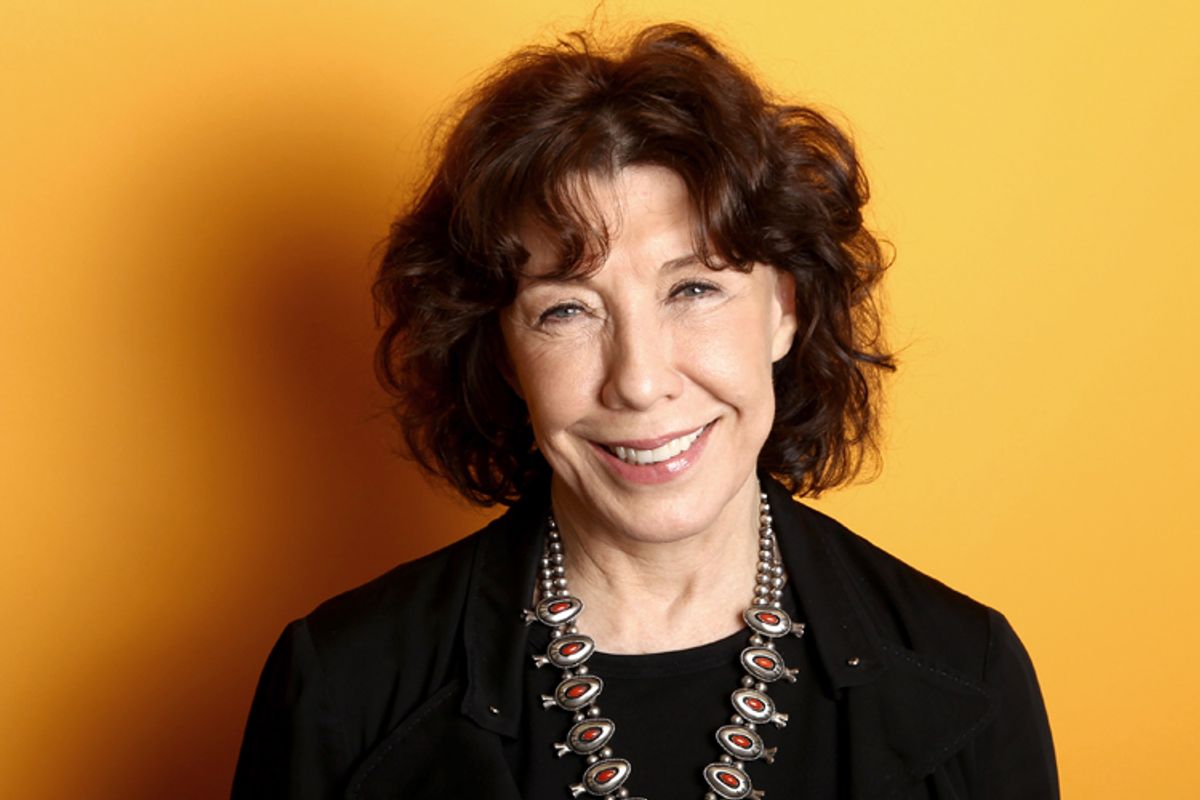 We still have so, so far to go in this country toward LGBT tolerance and equality. But it's incredible to consider how far we've come. Not just in the past few months. In the span of just one person's lifetime, she has gone from coyly deflecting questions about why she isn't married to talking hopefully about tying the knot – with the woman she's been with for over four decades.

Fans who recall her earlier career know that actress and comic pioneer Lily Tomlin spent much of it circumspect about her sexuality. Sure, she openly acknowledged her collaborator Jane Wagner; she narrated the documentary "The Celluloid Closet" in 1995. But last year, Michael Musto said that Armistead Maupin, who wrote the narration for the film, had been displeased with "the absurdity of having a closeted person like her narrate" it. Tomlin didn't officially come out until a 2000 interview with New York City cable-access TV program Gay USA. Back then, she explained, "I'm not going to make a big national case of it which is what, really, everybody would like to do, or some people. But in most articles, most people refer to Jane as my partner or my life-partner or whatever ... We've been around so long and been through so much and I always kind of took a lot of stuff for granted. I also never wanted to be anybody's spokesperson or poster person. You know, I see what happens to too many people." A year earlier, she told Denver's Out Front, "I never officially came out in any kind of really public way. I just always lived very simply and openly, but the press has never made a big fuss about me or said anything to me."

In the intervening years, however, more details of her life have emerged, including some strong suggestions that there have been a few fusses and things had been said along the way after all – and that her privacy was a more conscious choice. Last year, Tomlin told Rosie O'Donnell that back when she and Wagner were doing TV specials, "One of our writers said to me, 'I think you and Jane should come to work in separate cars.'" Tomlin has also revealed that in 1975, more than two decades before Ellen DeGeneres would announce "Yup, I'm gay" on its cover, Time magazine asked her to be the first to come out on its front page. "I was more insulted than anything," she has said. "I felt it was a bribe: 'We need a gay person, and we'll take anybody!'" She's admitted, however, "In some ways, I regret that I didn't do it, that I didn't take that opportunity. But at that time, my inflated idea about myself as an artist superseded everything." She's further acknowledged that her admitting her sexuality was "hard" on her mother – who also had a gay son – because "She was concerned the rest of the family would somehow be critical or I'd somehow suffer in some way." And this past spring, she contrasted the present climate with that of her earlier career, recalling, "It is remarkably wonderful [that celebrities can be openly gay], because I was on Carson one night back in '73. Carson said to me, knowing full well what he was saying, he said, 'Well, now you've never been married, have you?' I said, 'No.' And he said, 'Don't you want to have children?' And you could hear the audience got dead [silent], because in those days if a girl said she didn't want to have children or plan to get married it was ... something's wrong with you."

But on Monday evening, a mere 40 years after sitting down with Carson, she was eager to talk about her relationship and her plans. At an Academy of Television Arts & Sciences Pre-Emmy Performers Peer Group reception, Tomlin, who turns 74 in September, noted proudly that she and her 78-year-old partner, Wagner, have been together for 42 years. Then later, she revealed to E! that "We're thinking maybe we'll get married." Calling the recent strides toward marriage equality "pretty remarkable," she added, "You don't really need to get married, but marriage is awfully nice. Everybody I know who got married, they say it really makes a difference. They feel very, very happy about it."

For Tomlin, who's lived her whole public life determined to not be coerced into anything, being able to freely choose to marry or not to marry is awfully nice indeed. It's an evolution of an individual's life and the world in which she lives, a possibility that was all but unimaginable not so very long ago. And if Tomlin does walk down aisle, she's determined to do it as she's done everything else in her career – on her terms. "No rings, no bridal dresses," she told E!. "Maybe we'll be dressed like chickens."