Meet the cops who give Doritos to potheads!

After Washington voters legalized pot in November, Seattle's PD wants to be "cool," and connect with the weed crowd 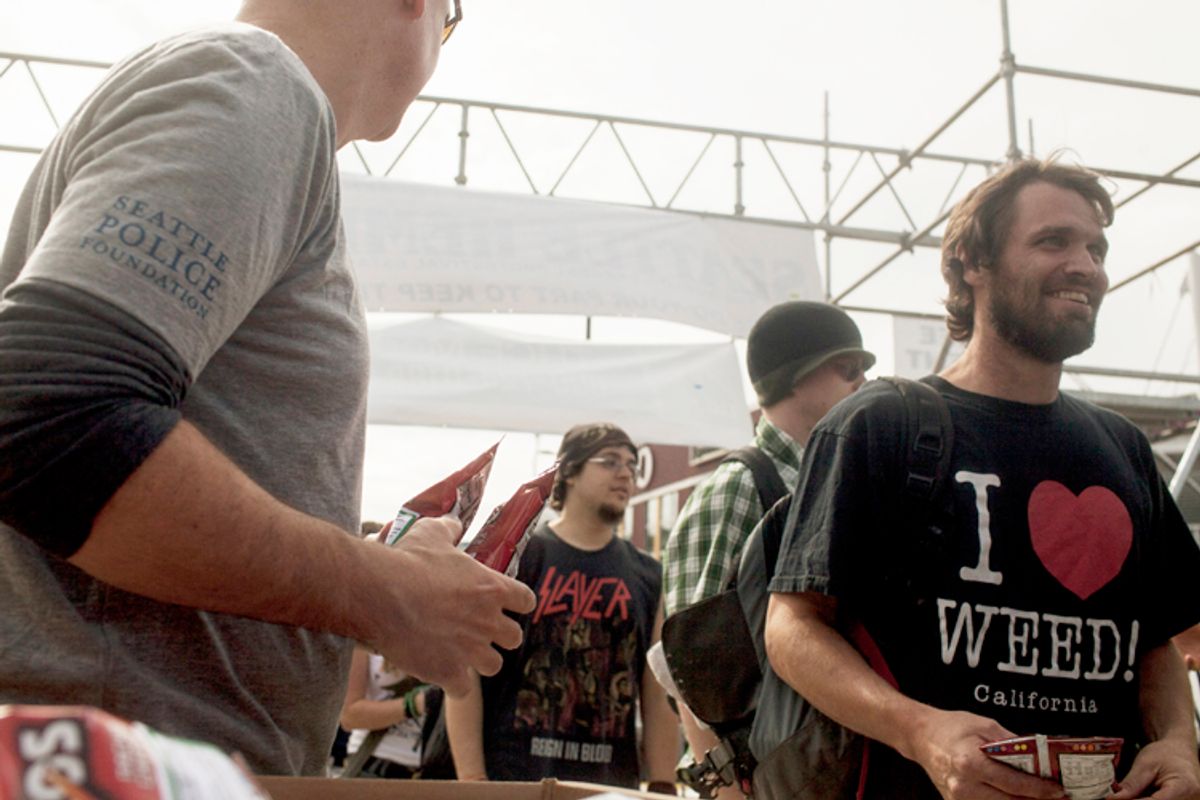 "Never in my career did I guess that I'd be passing out delicious snacks at Hempfest," Sean Whitcomb told Salon. "But that happened." Hempfest goers seemed equally surprised to find Whitcomb, a sergeant in the Seattle Police Department, handing out bags of Doritos and not court summonses among the bong vendors and joint smokers at the city's annual outdoor pot festival.

They're typically arch-nemeses, potheads and police officers, but the munchies were a big hit and both sides seemed to relish the irony, with the bags now selling on eBay for as much as much as $50 a pop.

Whitcomb and his fellow officers are trying to make positive interactions like this between two groups historically skeptical of each other more commonplace after voters in the Evergreen State legalized pot in November. They're trying to educate -- the Doritos bags came with information about the new law -- but beyond that, they're trying to make a connection.

Like parents who look the other way as their kids drink a few beers with friends (but confiscate everyone's keys), the Seattle cops also seem almost desperate to be liked. They return confiscated stashes, write funny blog posts and use their official Twitter account to announce that the chief of police pulled over a truck adorned with fake pot leaves -- in order to give the driver directions to Hempfest. And so what if there's nothing less cool that someone trying really hard to be cool -- can you really blame them?

"Absurd marijuana prohibition laws have long fueled contempt for law enforcement officials, and this type of outreach can help patch up that relationship between police and the public," said Mason Tvert of the Marijuana Policy Project, a pro-legalization group based in Washington, D.C. "It is great to see ... The Seattle Police Department appears to be moving forward with the voters, as opposed to resisting the changes demanded by voters, which is unfortunately still the case in far too many communities that have embraced reform."

Even critics of drug legalization have to tip their hats to the creative policing. "I think the Seattle PD is trying its best to operate in an environment where the political leadership and city electorate is decidedly pro-marijuana. Anyone with a pulse who has been to Seattle lately knows that public pot smoking is commonplace, so the police should be commended for trying to creatively get the word out that public smoking and other related behaviors are still illegal under state law," said Kevin Sabet, a former senior advisor to the "drug czar" in the Bush and Obama White Houses who now runs an anti-legalization advocacy group called Project SAM (Smart Approaches to Marijuana)

Sabet, whom Rolling Stone once dubbed "Legalization Enemy #1," added that it's a "shrewd political move." "If marijuana selling begins in the city, this kind of friendly behavior gives them leverage to aggressively enforce the law and prosecute behavior that is outside of the new law," he said.

For Whitcomb, who has been leading the outreach effort in the police department's public affairs units, the Doritos campaign is just part of effective government. The goal is to educate as many Washingtonians as possible about an important new law, and doing that involves making it fun and creative and accessible, he says. (By the way, the chips were purchased with private donations from the police foundation and distributed while officers were off-duty, so no taxpayer resources were used in the campaign.)

And it seems to be working. Whitcomb said he was heartened to have a man approach him at Hempfest who said that he had been afraid to contact police officers most of his life because he assumed the interaction would end badly. It's a typical sentiment among marginal communities like drug users and undocumented immigrants. "When you're in the public service industry, that's a real downer to hear," said Whitcomb. But now, thanks to the outreach campaign, the man said he felt more comfortable around police.

And branding experts say that the clever campaign has led to millions in what is essentially free and overwhelming positive advertising through press coverage (it's called "earned media" in political campaigns).

Still, even Whitcomb acknowledges the efforts are unusual for law enforcement education campaigns (think about the deadly serious drinking and driving PSAs that you might find on TV or billboards) and have led to some "grumbling" in other parts of the department. That's because it's more than a strict educational campaign. It is, even Whitcomb admits, at least a little bit about making Seattle's police cooler than any other cities' cops. "We like to think of that!"

The department has a long history of being ahead of the curve when it comes to drug policy. Former chief Norm Stamper is on the advisory board of NORML, another D.C.-based pro-legalization group, and the department has long worked with organizers of Hempfest to create a safe environment. "SPD is probably one of the most sophisticated and responsive police departments in the country," said Allen St. Pierre, the executive director of NORML.

There's plenty of social science research that shows that perceptions of police legitimacy affect crime rates, since police need the community's support (in the form of tips, information, etc.) to solve crimes. So why not do it like this? Would you rather be grilled by the NYPD with its stop-and-frisk campaign, or the department that just handed out free food at Hempfest?

If it all feels a bit like Dr. Evil desperately trying to reach out to his disaffected son in "Austin Powers" by doing the Macarena and pleading, "I'm hip, I'm with it!" Whitcomb gets that. "I would say we have probably succeeded at least a little bit better than Dr. Evil," he protested. No doubt. Dr. Evil should probably swing by Hempfest next year with some seriously righteous burritos.