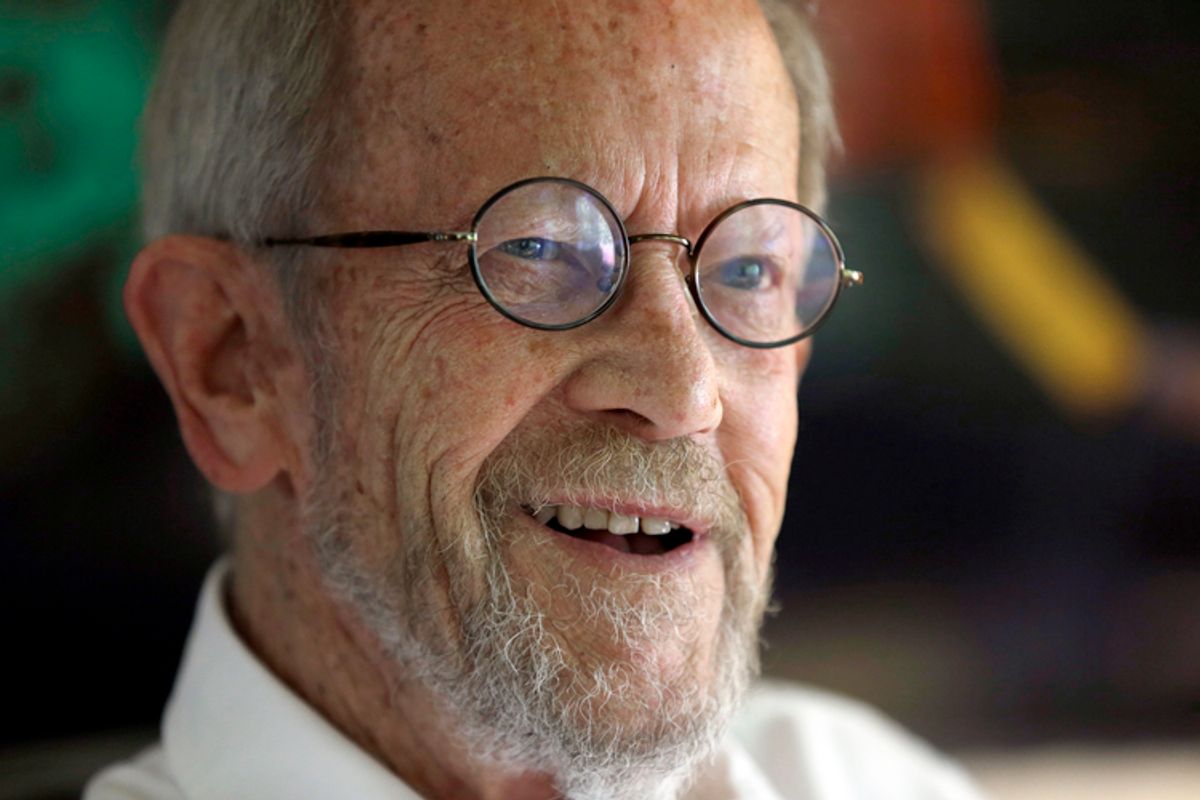 Elmore Leonard was best known for writing crime fiction, fast-paced novels about ex-cons, aspiring kidnappers, gun dealers and loan sharks, and the world-weary lawmen and -women who chase them and usually catch them, often as not shaking their heads over how damned dumb criminals can be. His novels were always expertly plotted and sardonically funny, but to tell the truth I can barely recall the story lines of the ones I've read -- except for "Get Shorty," on account of the improbable device of a gangster turned movie producer. What was impossible to forget about anything Elmore Leonard ever wrote was his voice.

You could say there are two main schools of American prose style: the pulpit and the porch steps. The first is forceful, openly intent on asserting its import, and apt to assume the cadences of a hallowed literary predecessor in defining the American experience or character, from Milton (Melville) to the King James Bible (Faulkner and, by extension, Toni Morrison) to the poetry of the Romantics (Fitzgerald). The porch-steps school, by contrast, the academy presided over by the spirit of Mark Twain, believes you can tell your readers everything worth knowing about Americans by showing them how we talk.

Even people who don't read crime fiction have felt Leonard's legacy, which can be detected in everything from the films of Quentin Tarantino to the novels of David Foster Wallace. He wrote bestsellers and got called a "literary genius" by that notoriously tough critic, Martin Amis. He was renowned for his dialogue, but even his exposition has the syncopated delivery of a bar-stool raconteur. Here is the opening paragraph and a half of "Glitz":

The night Vincent was shot he saw it coming. The guy approached out of the streetlight on the corner of Meridian and Sixteenth, South Beach, and reached Vincent as he was walking from his car to his apartment building. It was early, a few minutes past nine.

Vincent turned his head to look at the guy and there was a moment when he could have taken him and did consider it, hit the guy as hard as he could. But Vincent was carrying a sack of groceries. He wasn't going to drop a half gallon of Gallo Hearty Burgundy, a bottle of prune juice and a jar of Ragú spaghetti sauce on the sidewalk.

You can tell Vincent's a cop from that first paragraph, with its paperwork precision about time, place and logistics. By the time the second paragraph comes around the narration has begun to burrow into the irrationality of reflex and the way we handle and rehandle the memory of split-second decisions gone wrong. (Vincent ends up shooting his would-be mugger to death and brooding over it.) You also know, even before Leonard tells you so, that Vincent has kicked the story around a few times with his fellow cops, looking for confirmation that he ought to be second-guessing himself.

Leonard's dialogue sounds exactly like the way people speak -- an illusion, of course, because a word-for-word transcript of even a fairly interesting conversation would be leaden on the page -- and yet it's revealing in ways his characters don't intend or recognize. Here are two bail bondsmen from "Rum Punch," talking shop:

"I'm going up anyway. I have to deliver Reggie."

"Missed his hearing again? They beauties, aren't they?"

"He says it was his mother's birthday, he forgot."

"And you believe that shit. I swear, there are times you act like these people are no different than anybody else."

You'd think Leonard's work would have had better luck in Hollywood; with his celebrated economy, he did most of the work for his screenwriters in advance. Only two movie adaptations of his books were much good: "Out of Sight" (1998) and "Get Shorty" (1995). But then again, once television, that writer's medium, came into its own as a vehicle for grown-up entertainment, we got "Justified." The loping rhythms of serialized drama turned out to be a better fit for Leonard's fiction because some of its best moments come when his characters are just jawing. The interchange above sounds like a snippet of repartee from the marshal's office in "Justified."

But even those unfortunate enough to have never seen "Justified" and to have never read Leonard's books will, if they write at all, have come across perhaps the single most circulated text he ever produced: "Easy on the Adverbs, Exclamation Points and Especially Hooptedoodle," otherwise known as "Elmore Leonard's 10 Rules for Writers," originally published in the New York Times in 2001. The world is full of readers (not to mention reviewers) who'd like to see this list distributed to every aspiring novelist on the planet.

Leonard wrote that his 10 rules can be summed up as a single dictum: "If it sounds like writing, I rewrite it." (More specifically, he includes imprecations against opening a novel with descriptions of the weather, the use of the adverb "suddenly" and fancy variations on the word "said.") My favorite on the list is Rule No. 10: "Try to leave out the part that readers tend to skip."

Leonard's 10 rules are not quite a manifesto for the porch-steps strain of American prose, but they are a corrective to the pulpit crowd, to the speechifying and clotted lyricism that passes for "beautiful" writing in too much literary fiction. "If you have a facility for language and imagery and the sound of your voice pleases you … you can skip the rules," Leonard noted politely. "Still, you might look them over." Yes, you might.

Of course, there's a place in the literary pantheon for gifted monologuists and sermonizers, but even the best of them lack the convivial, vernacular charm that Leonard seemed to channel so effortlessly. (He never stopped writing because, he said, it was so much fun.) You can hear a whole gabby nation of misfits and renegades and wise alecks and hustlers speaking through his fiction; he contained multitudes, and seemed to enjoy the company. "I'll bet you don't skip dialogue," Leonard wrote, when elaborating on his Rule No. 10. Not if it was his, we didn't. We could not be more glad to have had this talk.