I swore Dash would live a childhood free of TV brands. And then he fell for his new best friend 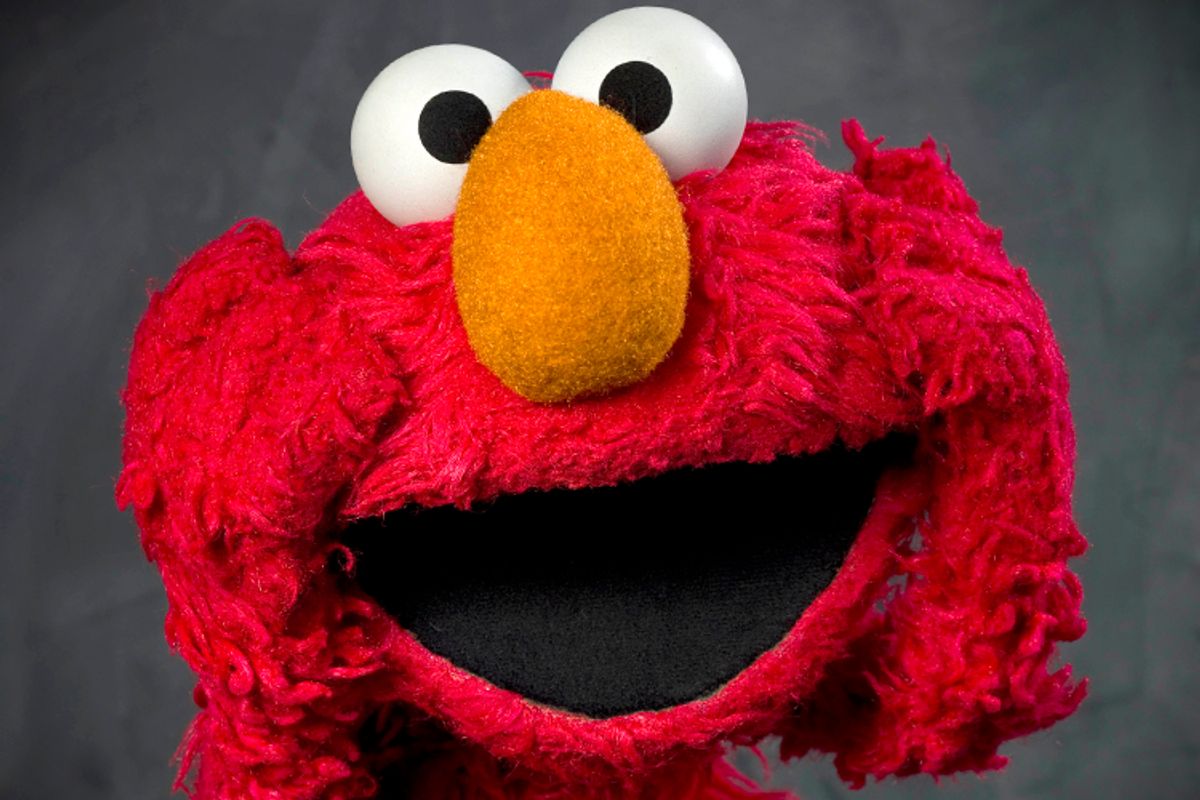 In grad school, I gave lectures to 250 undergraduates on the horrors of marketing to children. Basing my talk on books such as Juliet Schor’s "Born to Buy: The Commercialized Child and the New Consumer Culture," I spoke passionately to those students, who weren’t far removed from childhood themselves: Characters were carefully crafted marketing tools meant to lure our kids into amassing tons of branded junk. Television wasn’t scripted televised theater – it was just one long commercial. I knew that when I had kids, I would raise them with wooden faceless dolls. They shall be people and not brands, I vowed.

And then, my son Dashiell met Elmo.

It started, as these things do, with one morning of parental laxness. I opened my eyes to the sound of my 15-month-old crying on one of those dreary Oregon winter days when you never truly wake up. I changed his diaper and set the coffee to percolate. But I just wasn’t ready to parent that day, so after breakfast, we retreated to the living room, he with his bright eyes and ducky waddle and I gripping my coffee mug like a lifeline. I flipped on the television to the most innocuous programming I could find and leaned back with the warm comfort of having given myself one of those occasional mommy breaks you hear about.

Up until this point, I’d done a fairly good job of maintaining my commitment to no screen time. I had banished most branded products from the house. We had watched only a few videos together from the Baby Signing Time videos, whose only developmental drawback, as far as I can tell, is how much skinnier and oranger the host becomes as the series progresses. Apart from the oddly mesmerizing screensavers my husband had shown our colicky baby, he didn’t even know what a TV was.

But then Elmo came on the screen. Within seconds, his eyes glazed over and he was transfixed.  He settled into my lap and soon we were snuggling and watching TV – at 8:43 a.m.!

I grew up watching "Sesame Street," but I’m too old to have had a childhood relationship with Elmo. He didn’t come into being until 1984, when puppeteer Kevin Clash gave him his tinny toddler voice and his silly laugh. By the time Elmo was on the scene, he was baby stuff as far as I could tell -- as annoying as Barney and more ubiquitous. Within a few years, I was a teenager growing up in an Age of Elmo, in which sane adults wrestled each other in malls for Tickle Me Elmo dolls. I just didn’t get it.  Grover?  Cute. Oscar the Grouch? Totally relatable. Elmo? Good God, no. I hated him for his giggly laugh, for the sheer joy he took in being Elmo in Elmo's World.

But my son did not agree. Over the next few months, when Dash was thinking about Elmo, he became a full-body exclamation point of glee. “Elmo” was the first word out of his mouth when he woke, and the last word he said before going to bed. In between, he became a plaintive, pint-size Patti Smith shouting  out “Elmo” about 1,476 times a day. Soon, the favorite word of his emerging vocabulary lost all connection to its meaning and became nothing more than sound, pitch and texture.  I could see it rippling through his body like a wave of joy, his voice saying this one word over and over again, striking me like the shower blow from "Psycho."

In the beginning, it wasn't just seeing the furry little red monster on the screen that elicited these laments. Ernie was Elmo. So were the apples. So was the mailman. Within months of first meeting Elmo, Sesame Street’s most popular character had become the single most complete source of happiness for my toddler. But if he was so happy, why did I feel like such a grouch?

Kevin Clash, the embattled puppeteer behind Elmo, has written and spoken much about why he thinks kids love his furry red puppet so much. “Elmo is love,” he writes in his memoir "My Life as a Furry Red Monster: What Elmo Has Taught Me About Life, Love, and Laughing Out Loud."

But I had a different idea. He was born in a time when "Sesame Street’s" executives recognized that the show’s audience was skewing much younger than originally intended, 1-2-year-olds instead of 5- and 6-year-olds. Elmo is 3.5 years old and has amassed many of the skills toddlers aspire to, making him a role model and something of a big brother character. Elmo’s World is populated by kids who have acquired specific skills such as putting on their raincoats or tying their shoes, but also by nincompoop adults in the form of Mr. Noodle, Miss Noodle and the other Mr. Noodle, a group of ragtag vaudeville adults who do everything wrong. The fact that Elmo accounts for 50-75 percent of "Sesame Street’s" $500 million in branded products makes Elmo’s likability and sheer attractiveness to children who don’t know any better all the more insidious to parents who don’t want to be raising brand-crazed mini-consumers.

Elmo didn’t account for anything in my childhood, but I grew up watching a ton of television. I have great memories of belting out the theme song to Cheer’s, drinking Coke floats while watching Dallas and of wondering just how many names one evil woman can have (Alexis Carrrington Colby Dexter).  I was letting myself into the house after school by the age of 7 and regaling myself with a couple of hours of Thunder Cats, She-Ra, He-Man and the Smurfs before dinner was on the table. The television was always on in my childhood home – and still is, polite background noise as my mom putters or pops in and out from gardening.

But at some point as an older teen, I knew I had had enough. I look back on all the time I wasted watching television and wonder what I could have done to shape my mind during all those hours, what I could have written, whom I could have talked to, what loftier pursuit I could have challenged myself with. College just reinforced my marketing suspicion.

Do we give our kids what we had or what we never had? Or was there a new ethos – giving our kids the absence of what we had? This was how I had approached motherhood. Meanwhile, a year and a half into parenthood, I was finding it suddenly so simple and effective – and even dangerously fascinating – to turn Elmo on, wondering just how far my child would go down the road of Elmo monomania.

As with sex education, if Dash wasn’t getting Elmo at home, he was finding it elsewhere. Our life was becoming Where’s Waldo with a little furry puppet. Elmo was everywhere: bobble-eyed on toothbrushes, lurking on bubble bath, getting goofy on juice boxes. Every time we went to the store we’d have conversation about why we don’t need a red branded Elmo upholstered chair. Dash could spot Elmo at 20 yards. Within weeks, I was hearing stories of Dash’s behavior in his preschool class, where he would sit on his highchair like a king on a throne and lord over all of the kids toddling around the room.

“Elmo!” he was yelling and pointing when anyone touched an Elmo book or toy.

“That’s funny, a lot of toddlers like Elmo, huh?” I said to his caregiver, Noelle, who has been teaching preschool for 15 years.

“He has the worst case of Elmo obsession I’ve seen since I started working here,” Noelle said.

It was happening without my even really encouraging it – he had fallen in love with Elmo. How could this have happened? I had to understand it. I started watching "Sesame Street" with Dash, really watching it. I sang the intro song with him. I actually found things to like about Elmo’s World – I made fun of Mr. Noodle with him, I cooed at the babies Elmo cooed at. Then I bought a few Elmo T-shirts. I got him a couple of Elmo coloring books. I even took the first step down the mothering slippery slope by letting his grandparents know that he had shown … ahem … some interest in Elmo.

And then I finally got it one day when we were trolling through a multi-family yard sale. We spotted him at 100 feet: a life-size Elmo. Dash shrieked, I jumped, and we both went running. We arrived at a cardboard box in seconds. We both reached for the Elmo.

He shook Elmo. But Elmo didn’t talk back to him (thank God, it was one of those non-speaking versions). Dash looked really confused, so I picked up the doll and started to talk like Elmo.

“Elmo doesn’t like being in this box. Elmo wants to come home with you.” Dash smiled, grabbed the Elmo and hugged him.

Dash doesn’t understand marketing; he loves Elmo. He’s not a crazed baby consumer who has fallen prey to the most insidious childhood advertising known to man; he loves Elmo. And then it struck me. Was this just going to be the first in a long line of things and people and places that he loved that I was losing so much energy hating? What’s the next thing I’m going to learn to love in spite of myself – heavy metal? His girlfriends? His college major? His wife?

Within a few months, Dash moved beyond Elmo, but he hasn’t moved beyond puppets. At 3, his sense of storytelling is complex. He acts out scenes. He inhabits his characters with precise voices, and he understands story structure naturally. He’s one of those kids who obsesses over dialogue, constantly asking questions after a conversation is finished. What did you say? And then what did Daddy say? And then what did I say?

Maybe he’ll be Broadway’s most obsessive director. Maybe he’ll just put on puppet shows for the neighbors. It doesn’t really matter. Whatever he’s doing, whomever he’s loving, I’m finding ways to love it, too.