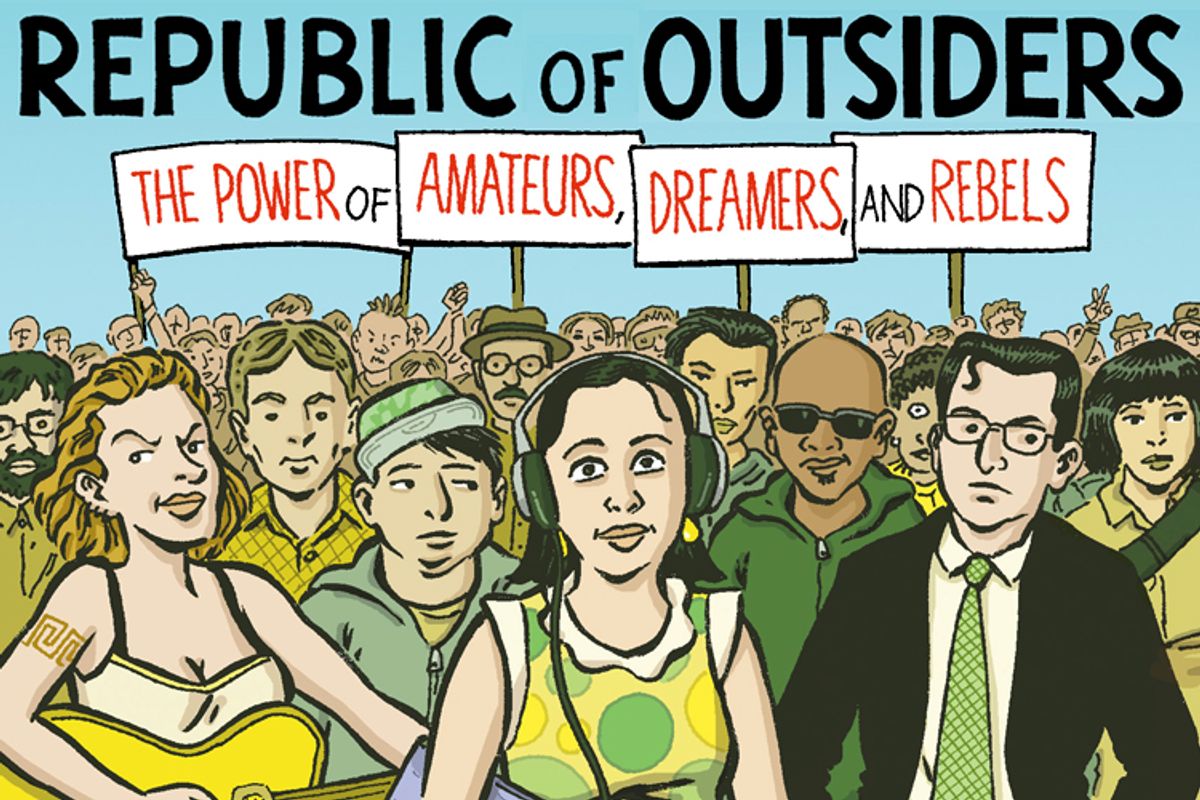 Excerpted from "Republic of Outsiders"

When I first heard about those I consider to be animal rights futurists, they seemed like something out of the film "Soylent Green" or perhaps "Frankenstein" — and, in a way, they sort of were.

Vladimir Mironov is a scientist focused on creating cultured meat, a “meat” produced in a lab from animal cells, not from a real live creature, in a process in which no more than one animal is harmed. It’s about as far from earthy nature as you can get, yet it could be the very solution to the problem of killing for meat that so many animal rights activists and vegetarians seek.

It’s true that you initially need a few muscle cells from a cow. Hypothetically, tons of meat could then be grown and harvested using that cow’s cells. The process requires animal muscle cells called myoblasts, which must be taken directly from an animal, which is why at least one must die. Magnified, myoblasts resemble caviar. When they fuse together, they create skeletal muscle fibers, the kind we use to walk and to exercise. Out of these fibers, ultimately, meat could be created. If the cells are grown in the proper medium using the necessary technology, which involves a five-story bioreactor, they could make enough meat to feed America, Mironov says.

With Jason Gaverick Matheny, Mironov co-founded New Harvest, a group that promotes work on artificial meat (one of the New York Times Magazine’s ideas of the year for 2005). Mironov and fellow scientists are using new technologies in order to give humans the food they desire without harming huge numbers of animals. If cultured meat is ever made in large enough quantities to meet the market demands of millions of people, it will constitute the biggest step forward ever for animal protection advocates. For those who want to eat animal flesh, cultured meat promises them a satisfying meal that is not made from a creature with a mind or a life. These activists’ and scientists’ great, elusive hope is that animals will no longer die on factory farms.

The idea was that if you bit into a burger made of artificial meat, you might not even notice the difference between its taste and texture and that of a grilled hamburger made from beef. PETA had offered a $1 million prize to any scientist or engineer who could produce commercially viable quantities of artificial meat grown in a lab from animal cells. As Bruce Friedrich, formerly vice president of policy for PETA and now senior director for strategic initiatives at Farm Sanctuary, put it to me, “Growing a corpse in a lab, to me, is less aesthetically revolting than eating a corpse of an animal that once lived. That animal had been mired in misery at a farm and then slaughtered in unhappy adolescence.” (The prize is somewhat ironic, since some food scientists regard PETA and its ilk as lab-hating enemies: PETA was sued by the Huntingdon Life Sciences lab after PETA sent in an undercover worker and then publicly released the results.) The contest’s catch: the winner must be able to make enough artificial meat to market the product in at least ten U.S. states at a competitive price.

In 2012, outside of San Francisco, Patrick Brown, a vegan professor at Stanford University, was also trying to cook up both artificial meat and dairy products in a lab. Like Mironov, his main goal was to “make a food for people who are comfortable eating meat and who want to continue eating meat. I want to reduce the human footprint on this planet by 50%,” he told the Guardian. Unlike Mironov, he was trying to use plant material to create simulated meat, rather than drawing on animal cells.

Mironov worked alone. Born in a small town near Moscow, he conformed to the cliché of the Russian scientist: when I met with him in 2008, he was a fifty-five-year-old chain-smoker, a tall, bearish man with a loud laugh, a warmly nihilistic demeanor, and tobacco-stained teeth surrounded by a small gray beard. At his lab at the Basic Sciences Building at the University of South Carolina in Charleston, Mironov showed me a paper on which he had drawn animal muscle cells, a bioreactor that can turn these cells into meat, and a hamburger with arrows running between them. While we talked, he got a message on his answering machine about five fetal porcine hearts he needed for his experiments. Such is his life.

Mironov’s preferred neologism for cultured meat was Charlam, “Charleston artificial meat.” He said the name gives the would-be meat what he called “the charm and dignity” that is its due. (A scientist can dream.)

What if real meat didn’t come from an animal? It’s a radical notion. For him, the ambition to create it springs from a desire to solve a scientific problem and participate in a revolution rather than from an ethical principle. He had carnivorous eating habits to rival those of any red-blooded Russian; when we met, he boasted of the quality of the cut of beef he had eaten the previous night. But for those eagerly awaiting cultivated meat — who imagine we might split the difference between consumer pleasure and consumer guilt — affordable Charlam is a possible answer.

Making artificial meat isn’t cheap; to make the cells blossom into savory burgers would cost millions. As Mironov put it, “The artificial meat hamburger is more expensive than gold, $5,000 or so.” Others have estimated that it may cost as much as $250,000 to develop a single burger, at least until it can be mass-produced. And there are significant taste challenges, for flesh is a complex mesh of muscle and gristle whose distinct flavor and texture have proved hard to fake.

At Eindhoven University of Technology in the Netherlands, tissue engineers supported by the Dutch government have already designed bioreactors that can make small-animal muscle tissue grow swiftly, but all agree that we are just at the beginning. Mironov, for one, wasn’t sure he would see mass-produced, widely available, affordable artificial meat in his lifetime due to lack of funding, although a Dutch artificial meat scientist has put the time frame closer to ten years. Before it reaches the mass market, Mironov suggested that Charlam might first be sold at a “food bar for Hollywood.” An exclusive bar could offer a mixture of artificial meat, nuts, and perhaps kinesin, a protein that he said was a weight-reducing ingredient found in cockroaches and shellfish. He imagined film stars of the future taking a special liking to it.

Eating artificial meat doesn’t necessarily mean that we see ourselves as animals, however. This is where the animal rights futurists and animal rights purists cleave. The purists use the phrases human animals and nonhuman animals, underlining the similarities rather than differences between animals and humans, stressing closeness and reciprocity. We must see animals as us, they say. The most truly radical challenge of animal rights is getting people to see that they are not substantively different from animals.

Copyright © 2013 by Alissa Quart. This excerpt originally appeared in "Republic of Outsiders: The Power of Amateurs, Dreamers, and Rebels" published by the New Press. Reprinted here with permission.