5 most absurd, self-pitying gripes of the Christian right

No, they're not oppressed 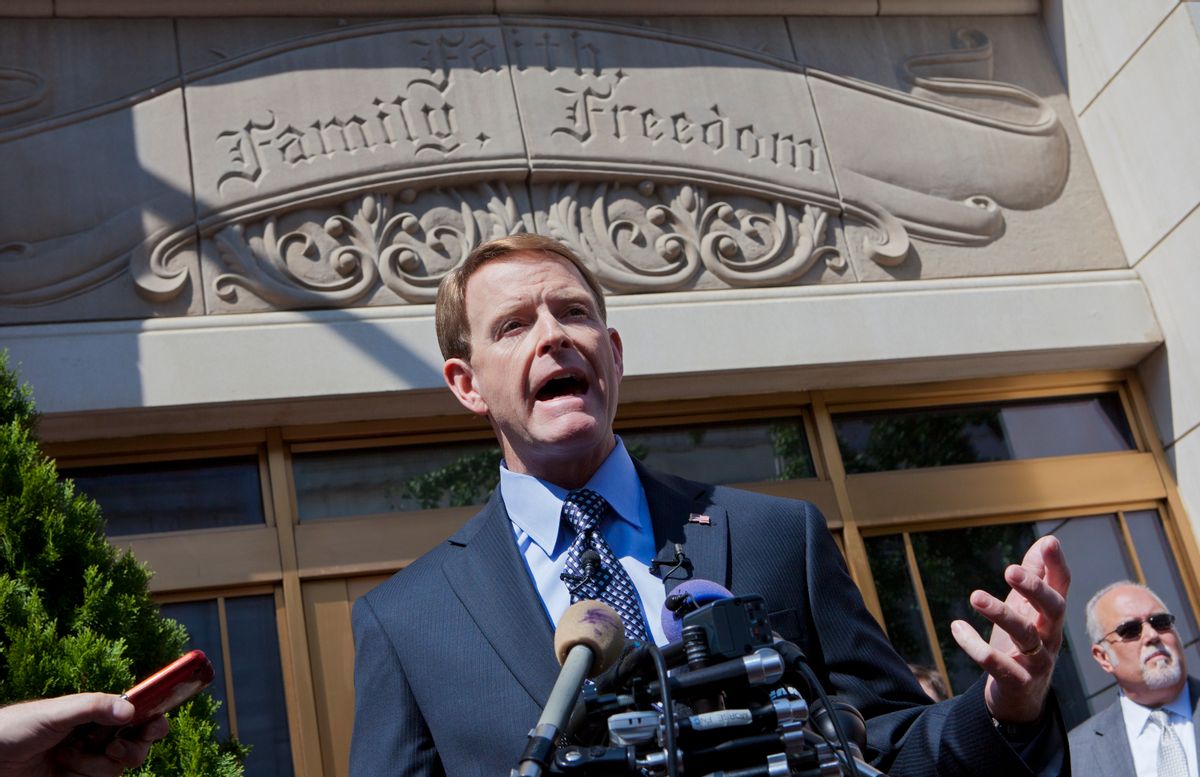 To hear activists on the Christian right tell the story, the conservative Christian American — especially the male conservative Christian American — is the most oppressed, victimized person in the country, and perhaps in the history of the world. It’s all utterly disingenuous, of course: Painting themselves as victims creates a cover to actually victimize other people, usually by imposing their fanatical religious views. Here’s a rundown of various ways Christian conservatives paint themselves as victims, and who the real victims actually are.

1) The issue: Whether or not states should ban “gay conversion therapy” for minors who cannot, by definition, give their consent.

Who the right claims is being hurt: Christian parents whose supposed “freedom of religion” requires that they be allowed to try to force their kids to be straight. Matt Stave of the Liberty Counsel denounced banning this practice, calling it a “slippery slope of government infringing upon the First Amendment rights of counselors to provide, and patients to receive, counseling consistent with their religious beliefs.”

Who is actually being hurt: LGBT youth, whose actual rights to be themselves are being threatened by parents whose poor parenting decisions are tantamount to child abuse. Gay conversion “therapy” isn’t therapy in any real sense; actual therapy is about helping people become whole and well, which can only be achieved by gay and queer people by learning to accept their sexuality for what it is. These programs don’t actually convert anyone, something that even prominent “ex-gay” organizations finally had to admit. At best, they shove young people into the closet. The American Psychological Association came out against gay conversion in 2009, and cited its use as a contributing factor to depression and even suicide.

But even if therapists did “convert” young people from gay to straight, that would not justify these programs. Religious freedom is something an individual possesses; if a young person decides to reject her parents’ religious teachings on sexuality, that is her right. Gay conversion non-therapy is not just an assault on young people’s right to wholeness, it’s an assault on their right to determine for themselves what religious beliefs to hold.

2) The issue: The new HHS regulations requiring insurance plans to cover, without a copay, an assorted list of preventive care, including contraception.

Who the right claims is being hurt: Religious business owners, whose “religious freedom” the right claims includes being able to deny earned benefits to employees, if they disagree with those employees' personal choices. When Hobby Lobby sued to be exempted from the mandate, the suit cited the family that owns the business’s religious beliefs: “The administrative rule at issue in this case runs roughshod over the Green family’s religious beliefs, and the beliefs of millions of other Americans, by forcing them to provide health insurance coverage for abortion-inducing drugs and devices, as well as related education and counseling.” (“Abortion-inducing” is a bit of right-wing speak that should be translated to “pregnancy prevention.”)

Who is actually being hurt: Everyone who pays into health insurance systems. The reason the Obama administration decided to make copay-free preventive services a benefit is that it maximizes the return on people’s healthcare investment, both in terms of their own health and saving costs down the line by preventing unnecessary health problems in the first place. Childbirth is incredibly expensive, and preventing unwanted childbirth promises to save both the immediate expenses and allow families to better prepare financially for when they do want children.

Again, the “religious freedom” argument being advanced by the right falls apart upon close inspection. Religious freedom is a right held primarily by individuals; having your boss impose his religious beliefs on you by manipulating your compensation is an infringement on your right to work without religious discrimination.

3) The issue: Businesses and the government taking an inclusive or even secular approach to the holidays. The right objects to a wide range of inclusive or secular behaviors, from governments sticking to secular expressions of the holiday season (Santa and Christmas trees instead of nativity scenes) and businesses that stick with greetings like “Happy Holidays” instead of “Merry Christmas.”

Who the right claims is being hurt: Christians, who are supposedly being oppressed by not having their particular faith affirmed at every turn. The fact that Christmas is included in the holidays that are supposed to be happy doesn’t matter; for some reason, Christians supposedly need special recognition. Nowadays, it’s not the holiday season without right-wing media waxing on about the “war on Christmas."

Who is actually being hurt: The over one in four Americans who does not identify as a Christian. It is true that a lot of the nearly 20 percent of Americans who have no religious affiliation are culturally Christian in some sense and do celebrate Christmas, but increasing numbers of Americans prefer to think of the holiday season as just that: a holiday season. Plus, there is the 6 percent of Americans who follow another faith besides Christianity. Plenty of people celebrate something other than Christmas or Christmas plus something else or a version of Christmas that isn’t particularly Christian at all. Secular and inclusive expressions of holiday joy are a way to acknowledge all this diversity without giving up values that everyone shares, such as family, love and getting gifts.

4) The issue: Schools leading students in prayer, whether it’s the teachers or the students offering the officially sanctioned prayer. The Supreme Court bans it all.

Who the right claims is being hurt: Religious people, and apparently all that is good and true in the world. Ronald Reagan defended school prayer in 1984 by calling bans on officially sanctioned prayer “government tyranny.” Modern religious conservatives echo the call. Creation Today blames all manner of social ills on the lack of official school prayer, saying that without it, “there is no absolute basis for morals, and a free society drifts toward anarchy.” Politicians and school officials around the country still periodically try to find ways to sneak it back in.

Who is actually being hurt: Anyone who doesn’t share the exact religious views of the person leading the prayer, whether student or teacher. Whether it’s a teacher or student, having any kind of official or official-seeming prayer is functionally an endorsement of one religious view over others, which in turn suggests that people who don’t share those views are less worthy members of the community than people who do share those views. Even though the Supreme Court has come down hard on all forms of official school prayers, there’s always a threat of schools deciding to flout the law. Banning official school prayer doesn’t harm anyone who wants to pray for whatever reason; private prayer is well-protected by the Constitution.

Who the right claims is being hurt: Straight people and children, who the right claims need to have marriage exclusive for straight people in order to be valuable and worth investing in. There’s also a claim that Christian ministers (as well as Christian florists and bakers) will be sued or even imprisoned if they refuse to participate in gay marriage once it’s legal.

Who is actually being hurt: Gay people and their children. It is true that there have been cases of florists or bakers being legally sanctioned for refusing to make floral arrangements or wedding cakes for gay people, but that’s because of broad bans on discriminating against gay people and has little to do with legalized gay marriage. Homophobic ministers, even when gay marriage is legalized, are just as free to turn down gay couples as they are to turn down anyone else they don’t want to marry for whatever reason. Needless to say, the claim that straight people need to exclude gays from the institution of marriage to protect their own has fallen apart under its own illogic.

That leaves the only people whose lives are actually affected by this issue: gay couples and their families. Being barred from marriage prevents gay couples from inheriting, drawing on a deceased partner’s Social Security, and being secure in making medical decisions for their spouses. For the children of gay couples, having their parents marry adds an extra layer of protection by giving both parents stronger legal ties to their children. Luckily, the country is finally starting to see the wisdom in these arguments, with a majority of Americans supporting the right of same-sex couples to marry.