Our economy can't grow because we can't raise the minimum wage 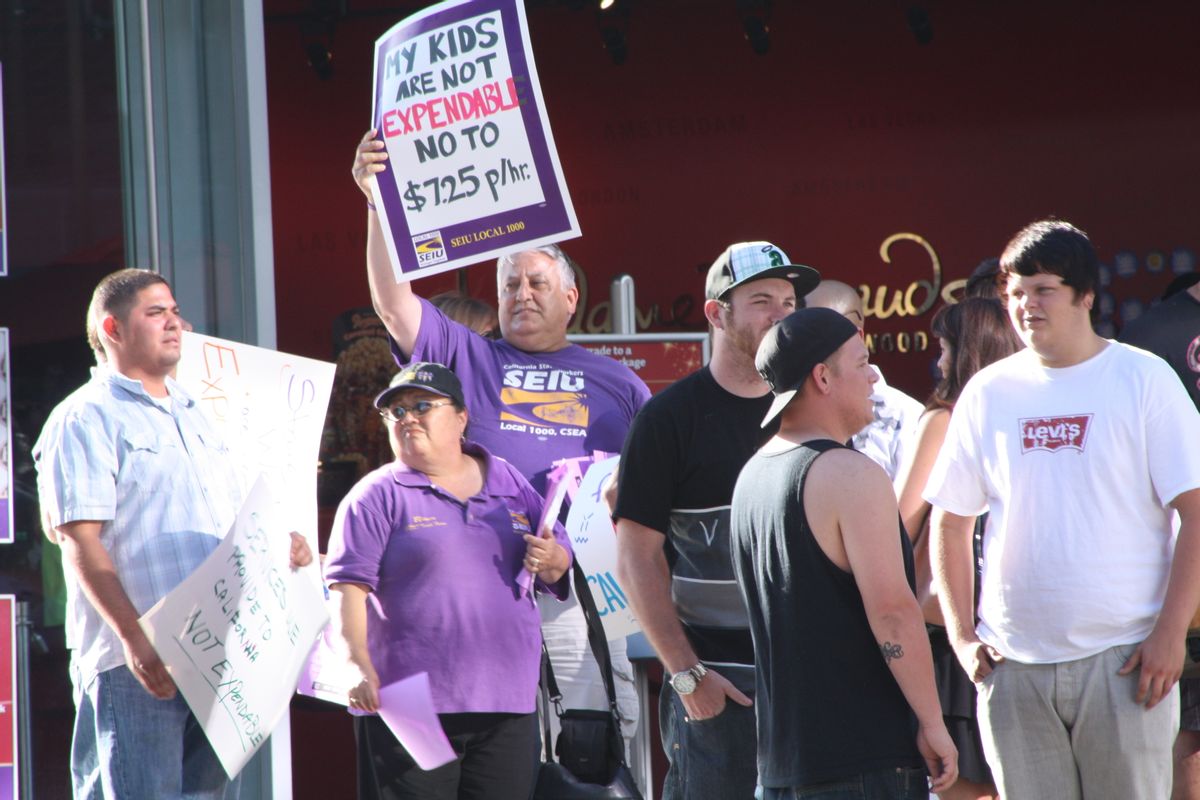 The debate to drive up the minimum wage continues in America; many are calling for an increase from the current $7.25 per hour to over $10.00 per hour. While I totally agree the minimum wage established in July 2009 needs to increase, I also warn that a higher minimum wage will likely mean higher prices at the cash registers, as there is absolutely no chance companies will absorb a mandated increase.

So what happens is an extremely tricky situation: we want to increase the living standard of the so-called working poor on one hand, but on the other hand, we know that raising the minimum wage will ultimately end in higher prices for the consumer—meaning the working poor aren’t likely to see any real increase in their standard of living.

Washington State is currently paying the highest minimum wage in the nation at $9.19 per hour, but there’s a move in beautiful Seattle to drive the wage up to $15.00. (Source: Associated Press, “Campaign seeks to push Seattle minimum wage to $15,” CNBC web site, August 19, 2013.) Now $15.00 per hour may not sound like much, but it’s a whopping 63% higher than the current minimum wage. In my view, while I’d like to see the lower-income workers get more money, a 63% increase is just not realistic.

In fact, increasing the minimum wage needs to be done in steps. Companies cannot afford to absorb massive increases all at once. Plus, do you really think Wal-Mart Stores, Inc. (NYSE/WMT) will simply accept the wage increase, no questions asked? I doubt it; the mass retailer has shown in the past its reluctance to pay out higher wages.

The real problem is that other lower-wage-paying companies, such as McDonalds Corporation (NYSE/MCD), simply won’t absorb wage increases without passing the increase on to their customers. And there’s absolutely nothing illegal in this. It’s a fact: an increase in wages equals an increase in the price of goods.

Think of it this way: when a company is forced to pay its minimum-wage employees a higher wage, the company needs to allocate more money toward payroll. With an increase in wage costs, that company now needs to find a new way to increase earnings so that it can cover this increase. Raising the price of its goods is an obvious answer for the company. For instance, the cost of a $3.00 “Big Mac” rises to $3.25 following an increase in minimum wage.

By boosting the minimum wage, the lower-wage earners may make more, but it will be partly offset by higher costs for end goods, such as those at Wal-Mart and McDonald’s, which are stores the lower-income earners may be more inclined to shop or eat at.

Moreover, increasing the minimum wage will mean higher input costs at manufacturing plants across the nation. These manufacturing plants will then have two options: 1) raise the price of the end product; or 2) move part or all of their manufacturing to cheaper labor markets in places like Asia and Latin America. I suspect some companies will look more seriously at the latter option; and we all know China and Mexico would welcome $2.00-per-hour plant jobs.

So before we just implement higher wages, we need to put more thought into the process; we need to consider what detrimental affects higher wages could have on America’s economy and its position in the broader economy, as a wage increase could easily hurt the competitiveness of the country in the global market.

This article Why Can’t Our Economy Grow? Because We Can’t Increase the Minimum Wage was originally published at Investment Contrarians