Why is religious pandering so prevalent?

Politicians from Obama to Bush just can't resist the "God strategy." Can we ever evolve toward secular government? 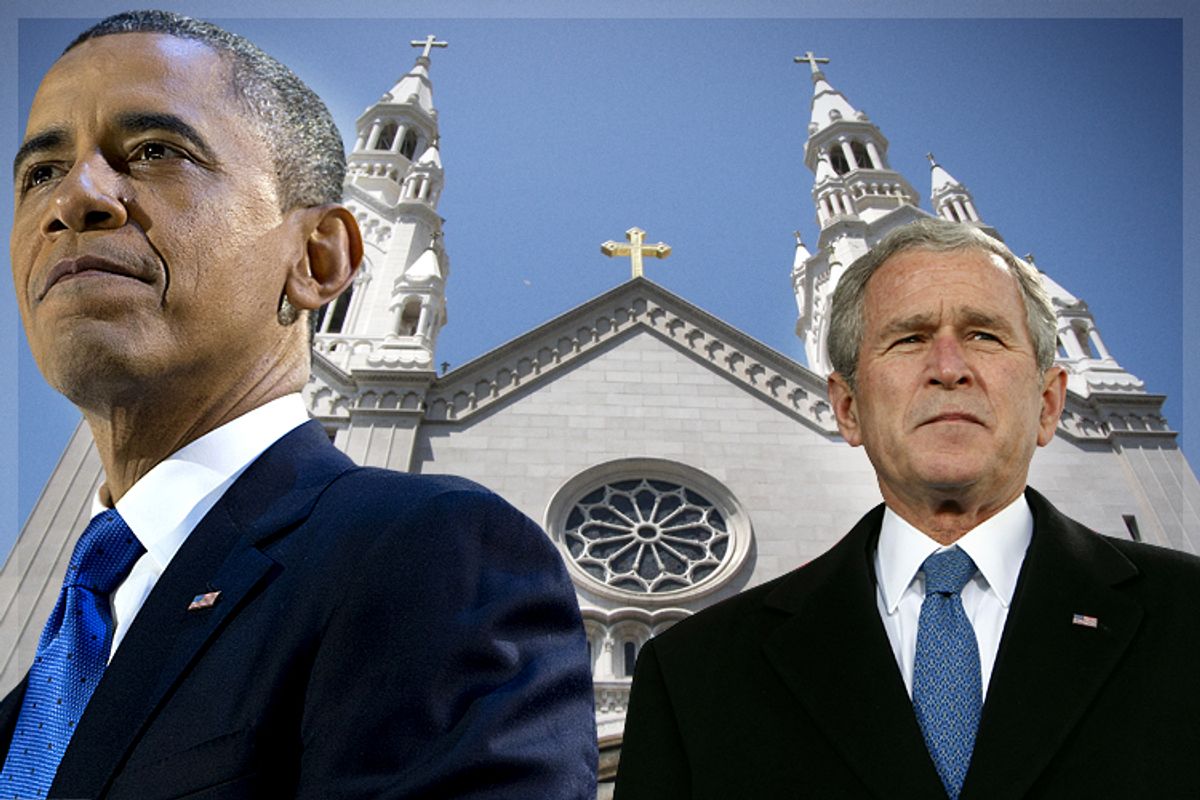 Religion has long had an extraordinary influence in U.S. politics compared to other democracies. But this isn't just a far-right phenomenon: If the Obama administration has its way, this influence might go even further. For example, the administration recently filed an amicus brief in the Supreme Court arguing that it is constitutional to conduct official Christian prayers at town council meetings.

The Supreme Court case stems from the town of Greece in New York, which opens nearly all its board sessions with prayers by Christian clergy. President Obama joined congressional Republicans and the religious right in supporting this practice. Ken Klukowski, a lawyer for the Family Research Council who crafted a separate amicus brief for the House Republicans, praised the administration for filing “a surprisingly conservative brief.”

Both the Obama administration and religious conservatives note that official prayers have been conducted before sessions of Congress ever since the days of the Founding Fathers. In their view, official prayers at town council sessions should likewise be allowed. On the other hand, official prayers in public schools have been unconstitutional for decades. This contradiction exemplifies how the Supreme Court has adopted a flexible interpretation of the First Amendment. Paradoxically, the Court has issued many decisions enforcing the separation of church and state, yet begins its own proceedings by announcing, “God save the United States and this Honorable Court.”

The debate on official prayers or references to God commonly focuses on whether they marginalize non-Christians or non-believers. The town of Greece has thus defended itself by arguing that members of non-Christian faiths and atheists are (theoretically) free to deliver invocations too. However, “a town council meeting is not like a church service,” as Rev. Barry Lynn responded on behalf of Americans United for the Separation of Church and State, an organization opposing all official prayers at government meetings. (The fact that Rev. Lynn is an ordained minister of the United Church of Christ illustrates how supporting a secular government should not be conflated with having anti-religious views.)

Polls indicate that Americans generally support references to God in public life. Sixty percent of the public notably believes that the National Day of Prayer created by Congress in 1952 should promote Christian prayer. This political reality largely explains President Obama’s endorsement of prayers at town council meetings. It additionally explains the broader context behind this decision. Obama and numerous other politicians regularly invoke God; and are therefore wary of restricting the role of religion in politics.

Most Americans want politicians to openly express their faith in God. According to conventional wisdom, this enables citizens to know if they can relate to their leaders on a personal level. The strongest advocate for this point of view may be Antonin Scalia, the staunchly conservative Supreme Court justice. Scalia admittedly takes comfort in how U.S. politicians frequently mention God. In Scalia’s eyes, government “derives its moral authority from God” and Americans “are a religious people, whose institutions presuppose a Supreme Being.” He has criticized “secular Europe” and the “tendency of democracy to obscure the divine authority behind government.”

Yet, many Americans appear oblivious to how invocations of God by politicians reflect a cynical tactic. Virtually every word spoken by politicians is calculated to try to  increase their popular support. Religious rhetoric is no exception.

In a remarkable book titled "The God Strategy," David Domke and Kevin Coe describe how the infusion of religion into politics surged since the Reagan presidency. While prior presidents regularly made references to God, Reagan made them almost systematically. For instance, Lyndon Johnson invoked God in 61 percent of his national addresses, compared to 26 percent for Richard Nixon and 25 percent for Jimmy Carter. But Reagan did so 96 percent of the time. His successors carried on: Bush I (91 percent), Clinton (93 percent), and Bush II (95 percent). (The study was completed before Obama’s presidency.) Reagan was the first president to start emphasizing “God bless America,” an expression that all his successors adopted. This chauvinistic slogan had only been used once, by Nixon, in a national presidential speech before Reagan.

Obama has also resorted to the God strategy, such as by mentioning God five times in his first inauguration speech. “God calls on us to shape an uncertain destiny,” he proclaimed. “Let it be said [that] with eyes fixed on the horizon and God’s grace upon us, we carried forth that great gift of freedom and delivered it safely to future generations.” The inescapable suggestion was that God supported Obama’s inauguration.

Of course, the Obama administration has disagreed with the religious right on multiple issues, such as contraception coverage, abortion and gay rights. But like myriad other Democrats, Obama does not reject the influence of religion in government altogether – he conceives it differently than Republicans. Obama illustratively said that his policies are based on the values of Christianity and other religions. He likewise argued that he seeks to build “[his] house on the foundation of Jesus Christ.”

The normalization of the God strategy is epitomized by how Obama and the Republicans have found common ground in supporting Christian prayers at town council meetings. Given that the GOP has zealously obstructed virtually all Obama’s policy proposals, its praise for Obama’s stance in this case is remarkable.

The First Amendment does not bar politicians from invoking God in their speeches. It will also license Christian prayers at town council meetings if the Supreme Court adopts the Obama administration’s stance. Regardless of what the law ultimately holds, perhaps future generations of Americans will become more skeptical of politicians who invoke God. There is arguably a difference between politicians’ ostentatious displays of faith, and the more genuine faith of people who do not exploit religion for ulterior motives. But religious pandering is unavoidable so long as faith is considered a major public matter rather than a mainly private one.

If America ultimately evolves toward truly secular government, the change might not come from the law but from changing norms. The reason why U.S. politicians invoke God far more often than politicians in other Western countries is not necessarily due to different legal standards or the fact that religiosity is more prevalent in America. It is also because recurrent religious rhetoric by politicians is more likely to be interpreted as demagogy by the public in Europe, Canada, Australia or New Zealand.

Maybe we could learn from the admission of a leader who was elected partly by convincing his supporters that he was a pious and compassionate servant of God. “Eight years [as president] was awesome, and I was famous and I was powerful. But I have no desire for fame and power anymore,” George W. Bush declared.