A disorder where the history-laden city triggers a psychotic event 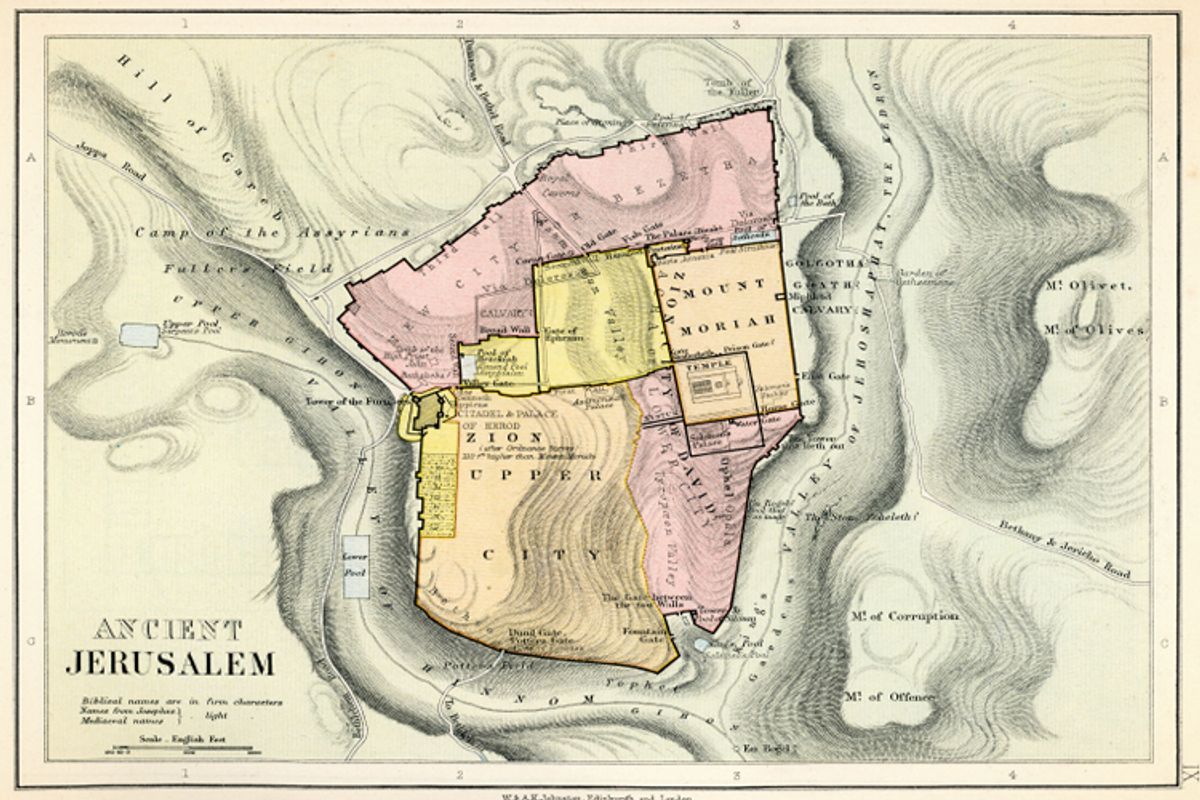 Excerpted from Falling into the Fire.

In the British Journal of Psychiatry, Yair Bar-El and his colleagues describe Jerusalem syndrome, an acute “psychotic decompensation” that afflicted 1,200 tourists to the Holy Land from 1980 to 1993. “On average,” the authors write, “100 such tourists are seen annually, 40 of them requiring admission to hospital.” The paper divides the patients into three categories. The first is made up of people who have already been diagnosed with a psychotic illness before traveling to Jerusalem. “Their motivation in coming to Israel,” the authors write, “is directly related to their mental condition,” frequently involving delusions. A subset of these patients “strongly identify with characters” from the Bible “or are convinced that they themselves are one of these characters.”

Visitors in the second category lack a psychiatric diagnosis but have what the authors call “idiosyncratic ideations.” These are groups or individuals with “unusual ideas” who are “outside the mainstream of the established churches.” They settle in Jerusalem believing, for instance, that doing so will bring about the resurrection of Christ. They may “wear distinctive clothing which, according to them, is similar to that worn in the days of Christ.” At some point these patients shift from merely harboring extreme religious beliefs to engaging in behavior that becomes more problematic. Bar-El and his coauthors give the example of a man who set out to preach his message of “true religion” to the people of Jerusalem and eventually, in the Church of the Holy Sepulcher, “succumbed to an attack of psychomotor agitation and started shouting at the priests, accusing them of being pagans and barbarians and of worshipping graven images.” Eventually the altercation became physical, and the man began destroying paintings and statues in the church, resulting in his psychiatric evaluation. He was found to have no identifiable mental illness beyond his extreme religious beliefs, even three years after the episode.

It is, however, the third category of tourists afflicted by Jerusalem syndrome that is the most mind-boggling. This category is described as a “pure” form of the syndrome, because its sufferers have no history of mental illness. These tourists experience an acute psychotic event while in Jerusalem; they recover “fairly spontaneously, and then, after leaving the country, apparently enjoy normality.” As a result they are considered to be mentally well, but for these isolated episodes. However, what episodes they are!

Tourists with the third subtype of Jerusalem syndrome succumb to a sequence of identifiable stages that are consistent, characteristic, and highly specific.

First, such sufferers exhibit “anxiety, agitation, nervousness and tension.” They then announce that they wish to split off from their tour group or family and explore Jerusalem on their own. The authors write, “Tourist guides aware of the Jerusalem syndrome and of the significance of such declarations may at this point [preemptively] refer the tourist . . . for psychiatric evaluation.” They add ominously, “If unattended, [the following] stages are usually unavoidable.”

People afflicted by Jerusalem syndrome will then demonstrate a “need to be clean and pure,” becoming obsessed with bathing or compulsively cutting their finger- and toenails. Next is my favorite step in the sequence: the “preparation, often with the aid of hotel bed-linen, of a long, ankle-length, toga-like gown, which is always white.”

Once appropriately clad, the person in question will proceed to “scream, shout, or sing out loud psalms, verses from the Bible, religious hymns or spirituals.” He or she will then proceed to a holy place within the city and deliver a sermon, which the authors describe as “usually very confused and based on an unrealistic plea to humankind to adopt a more wholesome, moral, simple way of life.”

The affected person typically returns to normal within five to seven days, feels ashamed about his behavior, and recovers completely. Between 1980 and 1993, the authors report that forty-two cases met all the diagnostic criteria for this third subtype.

Similar syndromes have been reported in Paris and Florence, each with its own odd specificities. Paris syndrome strikes Japanese tourists, sixty-three of whom were hospitalized with the condition between 1988 and 2004, according to a paper in the French psychiatric journal Nervure. Apparently the condition was common enough—and severe enough—that the Japanese embassy arranged for a Japanese psychiatrist to assist in treating cases at the Parisian psychiatric institution Hôpital Sainte-Anne. The Canadian philosopher Nadia Halim notes in her paper “Mad Tourists” that “Paris holds a ‘quasi-magical’ attraction for many Japanese tourists, being symbolic of all the aspects of European culture that are admired in Japan.” Tourists who fall victim to Paris syndrome “arrive in Paris with high, romanticized expectations, sometimes after years of anticipation, . . . unprepared for the reality of the city. The language barrier, the pronounced cultural differences in communication styles and public manners, and the quotidian banalities of contemporary Paris—the ways in which it is like any other 21st century Western city—induce a profound culture shock” that results in symptoms ranging “from anxiety attacks accompanied by feelings of ‘strangeness’ and disassociation, to psychomotor issues, outbursts of violence, suicidal ideation and actions, and psychotic delusions.”

In the 1980s Graziella Magherini, an Italian psychiatrist and psychoanalyst, identified a syndrome in Florence in which visitors to the city become emotionally unmoored by their encounters with its art and architecture. Magherini reports on 106 cases from Santa Maria Nuova Hospital over ten years. Symptoms include breathlessness, palpitations, panic attacks, and fainting or collapsing to the floor. Severe cases have involved persecutory delusions and paranoia.

Nadia Halim writes in “Mad Tourists” that in many of Magherini’s case studies “patients report some sense of disintegration” or feel themselves breaking apart. After becoming transfixed by Caravaggio’s Bacchus, a fifty-three-year-old man felt “there was no longer any precise definition” in his life. The New York Times reports an event in front of the same painting, in which a man “collapsed onto the floor of the Uffizi, thrashing about madly. He was carried out on a stretcher, raving and disoriented.”

Also according to the New York Times, a twenty-five-year-old woman named Martha “became ‘delirious’ after standing for a long time before the Fra Angelico paintings in San Marco. She returned to her hotel,” the Times reports, “and stood for a long time in a corner, mute and withdrawn.” A twenty-year-old woman was seized by terror in the Uffizi and screamed for help, believing that she felt “the anguish of breaking into a thousand pieces.” Halim writes that she was “so agitated she had to be physically restrained.”

A 2009 paper in the British Medical Journal describes a seventy-two-year-old artist who went to Florence “to fulfill a lifelong wish to see the art and culture that so inspired him. He described some works of art as ‘like seeing old friends.’” The Ponte Vecchio apparently had a particular allure for him, being “the part of Florence he was most eager to visit.” Once he was standing upon it, he had a panic attack, became “disoriented in time,” and became floridly paranoid, believing, among other things, that his hotel room was bugged and that he was being monitored by international airlines. His symptoms resolved in three weeks.

Magherini dubbed the condition Stendhal syndrome after the French author of that name who became overwhelmed as a result of viewing the frescoes in the Church of Santa Croce. Stendhal wrote that as he exited the church, the sight of Brunelleschi’s dome on the Florence Cathedral nearly led him to madness. “I felt a pulsating in my heart,” he wrote about the experience. “Life was draining out of me. I walked with the fear of falling.” He was cured only by sitting down to read the poetry of Ugo Foscolo, who had written about Florence and hence was “a friendly voice to share my anguish.”

The mere existence of these “city syndromes,” as Nadia Halim dubs them, is controversial. Many voices have weighed in to argue that these episodes are merely exacerbations of preexisting psychiatric disease or the initial onsets of mental illnesses that happen to occur in foreign cities. Still others have chalked up the circumstances to jet lag or some other mundane variety of travel-related disorientation. At this point no one knows.

Excerpted from "Falling Into the Fire: A Psychiatrist's Encounters With the Mind in Crisis.". Reprinted by arrangement with the Penguin Press, a member of Penguin Group (USA) LLC, A Penguin Random House Company. Copyright © Christine Montross, 2013