The right's big gay dilemma: A movement divided in 2016

While Democrats are now united on LGBT rights, Chris Christie and Rand Paul foretell a juicy GOP reckoning in 2016 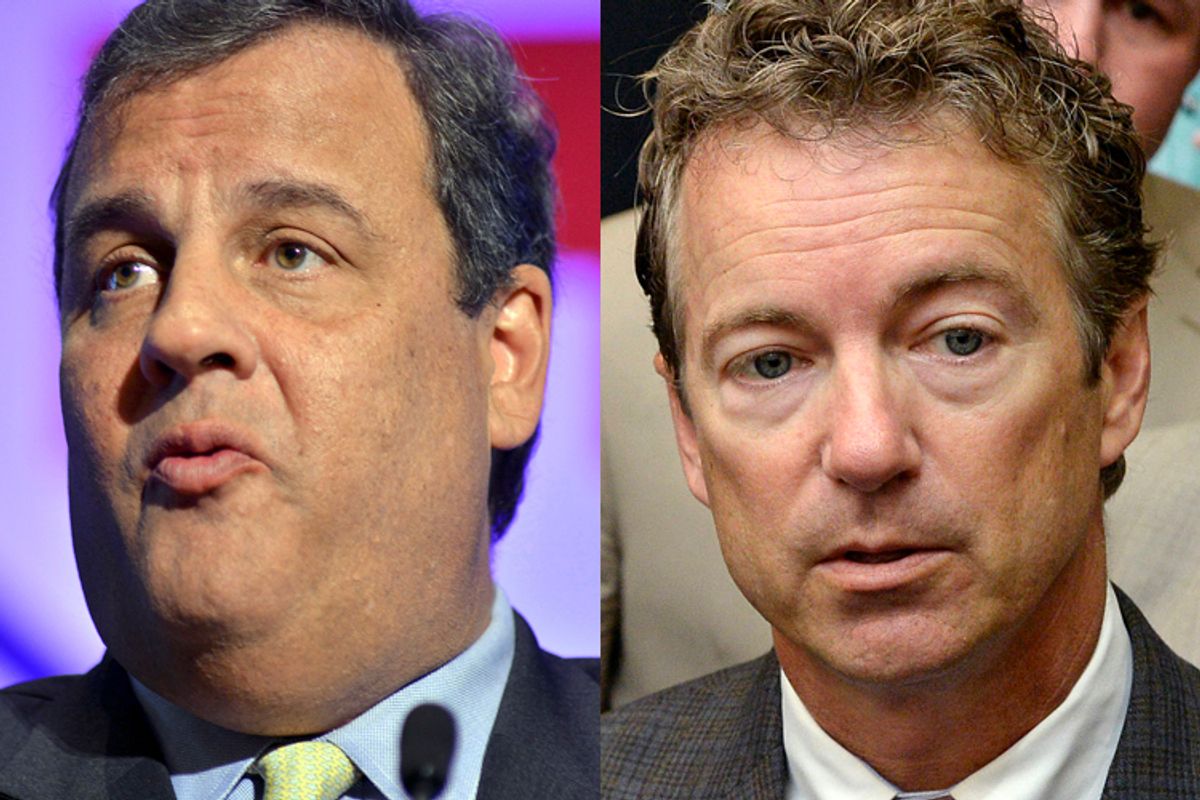 Last week, in a move that could signal the opening salvo on LGBT issues for reasonable Republicans in 2016, New Jersey Gov. Chris Christie drew headlines by opting to sign a bill banning gay conversion therapy.

While the statute itself was an undeniable win for gay activists, Christie’s willful entry into the fray suggests that 2016 may be the year in which the baton is passed from Democrats to Republicans in terms of an interesting presidential debate on gay rights.

Democrats could be a yawn where political theater is concerned – a bunch of candidates scrambling to claim they were pro-marriage equality in their heart of hearts before any of their competitors were. Sure, it would be fascinating to see how much credit Vice President Joe Biden takes for his "Meet the Press" appearance many believe forced President Barack Obama’s hand on same-sex marriage. But other than that, the intrigue quotient seems low.

The Republican dilemma, however, is downright juicy. How can they possibly reconcile wooing social conservatives in the primary with any shot at winning mainstream America in the general? The public is advancing so quickly on LGBT equality that any serious candidate will have to avoid sounding antiquated – or perhaps even bigoted – in order to have a prayer with unmarried women, independents and the under-30 crowd.

As Gov. Christie and Kentucky Sen. Rand Paul jockey to lead the electable wing of the Republican Party, Christie -- who vetoed New Jersey’s marriage equality bill last year -- seems to be buying himself some room to maneuver going forward.

The most noteworthy part of the muted publicity he did around signing the bill was a video link the governor’s team disseminated to help explain his position.

“I’ve always believed that people are born with the predisposition to be homosexual,” Christie responds. “And so I think if someone is born that way it’s very difficult to say then that’s a sin.”

Christie, a Catholic and a lawyer, was asked about his religious beliefs and used the immutability of being gay to justify his conclusion. But just as his answer had religious implications, it also has legal consequences — after all, how can one legally penalize someone for something they have no choice about? Notably, instead of burying the video, his team elevated it and can now reference it as justification for any pro-LGBT stance Christie decides to take from this day forward. Or not.

Meanwhile, Paul, who talks regularly about the need to bring new energy into the Republican Party by attracting young voters, has been carving out his own middle ground on the issues. He supports “traditional marriage” and Kentucky’s prohibition on same-sex marriage, but he also opposes federal interference into a matter he believes should be left up to the states.

“As a country we can agree to disagree,” Paul told an ABC reporter. “As a Republican Party, that’s kind of where we are as well. The party is going to have to agree to disagree on some of these issues.”

That sounds frighteningly close to something Barack Obama might have said as a young senator gearing up for his 2008 presidential bid.

During the primaries that election, Democrats were in the hot seat on gay rights – trying to balance their general election interests with one of their most enthusiastic constituencies. In fact, the Human Rights Campaign and LOGO invited candidates from both parties to debate LGBT issues at separate events, but the GOP forum fizzled after Mitt Romney declined to come and John McCain and Rudy Giuliani failed to respond.

Nearly every Democrat, however, showed up to that first-of-its-kind debate on Aug. 9, 2007. But it was New Mexico Gov. Bill Richardson who stole the show when he said being gay was “a choice.” “Wrong Answer, Governor,” admonished a Washington Post column, while a New York Times headline called it a “Gay Gaffe.”

Six years later, Christie, a GOP front-runner at this early stage, has already sidestepped that landmine. But get out the popcorn – over the next few years, some Republicans are bound to twist themselves in pretzels trying to make their opposition to same-sex marriage palatable to more than half the nation. We all know how that went for the current occupant of the Oval Office.