Miley Cyrus acted like a male pop star at the VMAs. But she'll get criticized like a female one 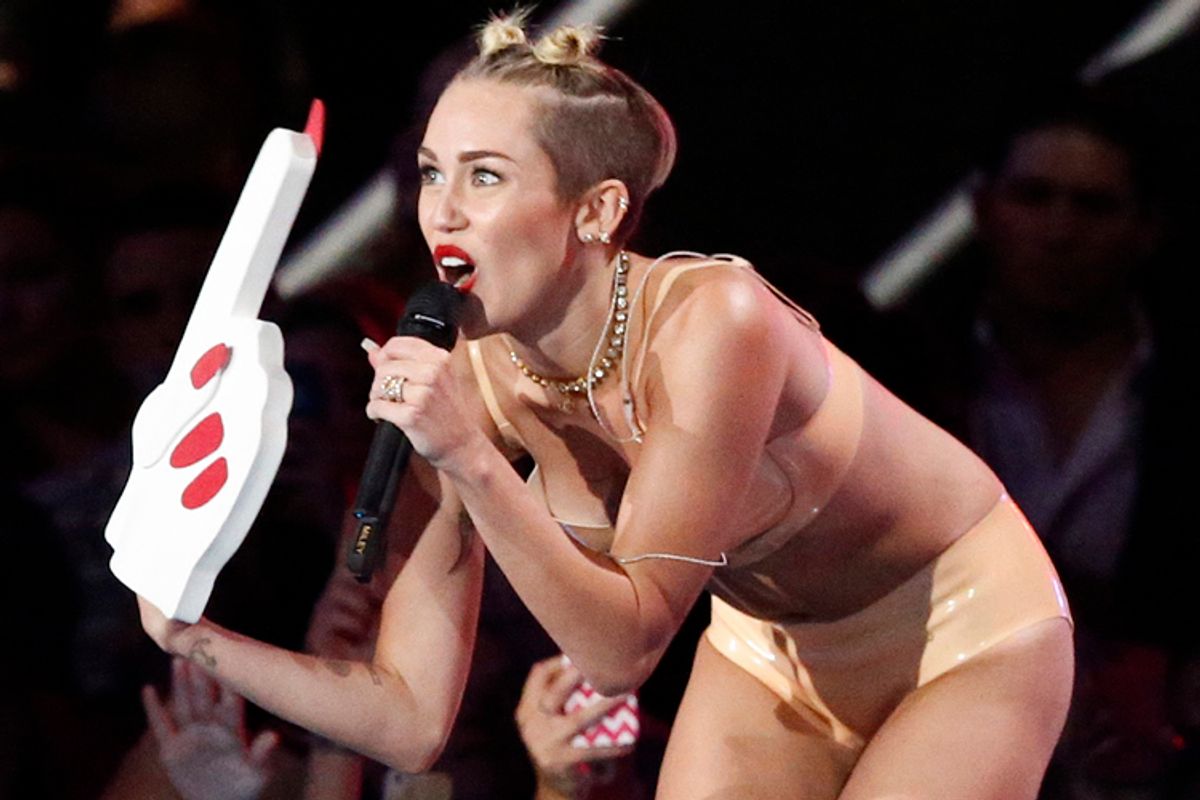 It’s hard being a living doll.  Ask Miley Cyrus. The singer’s slightly bizarre, teddy-bear twerking performance at last night’s MTV’s Video Music Awards has captured the public imagination. Today’s news is littered with shock, dismay, disgust and approbation, on many different fronts. The Mail and Globe went so far as to write a funny mock-obit. As one person tweeted, “She was a great singer and actress. Was. RIP Hannah Montana. RIP childhood.”

It’s impossible to consider her performance without noting the following: 1) a 36-year-old Robin Thicke, standing onstage while Cyrus gyrated around him; and 2) the use of women as props and accessories, a habit that practically defines music industry productions.  Usually, though, the people using women thus are men. At the VMAs, Cyrus expressed her celebrity and power pretty much the way the most visible and prominent men in her industry do.  And while she deserves some criticism for her performance, the kind she's likely to get is deeply linked to her gender.

This summer, Thicke caused an outcry over his sexist “Blurred Lines” video, just the most recent example of women used as naked or nearly naked props. In one analysis, researchers found that women dancing in explicitly sexualized ways can be found in 84 percent of videos.  In the same survey, 71 percent of women were found to be wearing revealing and suggestive clothing compared to 35 percent of men. In music videos the sexualization is often racialized. Generally speaking, men, like Thicke, sing fully clothed, while women dance around them, largely not.

But what happens when the star performer is herself a woman? Cyrus was cocky, she strutted around, she danced (really awkwardly), was brash and confident and made lewd gestures and creative use of her tongue.  In addition, she, like her male peers, sexually and racially objectified other women who were onstage with her, almost all of whom were black -- and she has come in for deserved criticism for this.  Cyrus has recently been the topic of conversations regarding race and cultural appropriation and ratchet culture, and last night further contributed to the debate.  But, Cyrus, as other women performers do, also embodies the sexualization that can be so problematic.  She acted like a man, objectified herself and other women, and appropriated several racial cultural signifiers when she did.  She was performing on many different levels.

Cyrus has, for years, been navigating the treacherous waters of growing up and being successful in front of the world.  She’s been doing it brashly and unapologetically, which takes some  crotch-grabbing-worthy balls, so to speak. And she consistently demonstrates a high level of control over what she does with her own body.  It’s not limited to sexualization.  Once in a while, a female celebrity alters her appearance in unpopular ways and ripples are felt across the universe. Both Cyrus and Beyoncé recently opted for very androgynous, short blond boy-cuts: the traditional coif of men with power.  The alterations unsettle people, because they often involve rejections of gender conformist ideas about how women, especially sexualized ones, should look.

Girls and women who too brazenly display power, and are unself-conscious or unapologetic about it, disturb people. When famous women get too big for their, admittedly sometimes really small, britches, our culture likes to make sure that what’s inside that often “pretty head” is seen as crazy.

Women who want power or get power are often considered "mad," which has two interesting meanings.  Michele Bachmann’s controversial Newsweek cover didn’t make her look enraged so much as demented. Film in general is exponentially more likely to portray insanity as essentially the purview of women, especially independent ones.  Given infinite choices about how to portray one of the few female leaders of the 20th century, Margaret Thatcher, the producers of "Iron Lady" went with a dementia narrative. The entire film noir genre, with its femmes fatales, can be seen as a litany of women confronting gendered restrictions and rebelliously and callously defining themselves to death.

Last night’s performance brought the public’s perception of Cyrus one step closer to the "crazy" narrative -- the casually misogynistic, “OMG, quick, look at another crazy, fucked up, slutty girl go down.” It’s often a white girl, because they’re more commonly featured in our dominantly white cultural narrative. But black female performers are criticized too, sometimes in racialized ways.  Lauryn Hill, Rihanna and other popular performers have been portrayed as dangerous, sexually transgressive and unhinged.  Lauryn Hill went so far as to sing, “I’m not crazy,” at one point.  Our cultural obsessions with the mega flame-outs of Britney Spears, Amanda Bynes, Lindsay Lohan, Whitney Houston and other “troubled divas” have been epic.  And the democratizing effects of the Internet now mean that this kind of micro-examination of girls’ lives and actions is by no means limited to celebrities.

The shame-filled objections to women like these are simply a double standard about power and worthiness.  The outrage and “disappointment,” cloaked primarily in concerns about, “sluttiness,” “selfishness,” “craziness” and “inappropriateness,” add up to one thing: female unworthiness.

Women, we’d like everyone to keep thinking, are unworthy of too much agency, authority, power and self-expression. Otherwise, everyday people would be decrying every top-billed male performer for engaging in the exact same behavior that Cyrus did last night.  It would help if we taught kids, in school, to be critical of stereotypes, to understand constructions of gender, race and ethnicity, and to appreciate the important difference between sexiness and sexualization.  Miley Cyrus deserves critique for the racially objectifying elements of her performance, and even for the production of an artistically questionable, odd and distasteful set involving bears and bad dancing. But Cyrus is most likely be criticized instead for being "slutty"or "crazy" -- and those words matter and speak volumes.