Productivity has grown, so why are we earning less than we did 13 years ago? 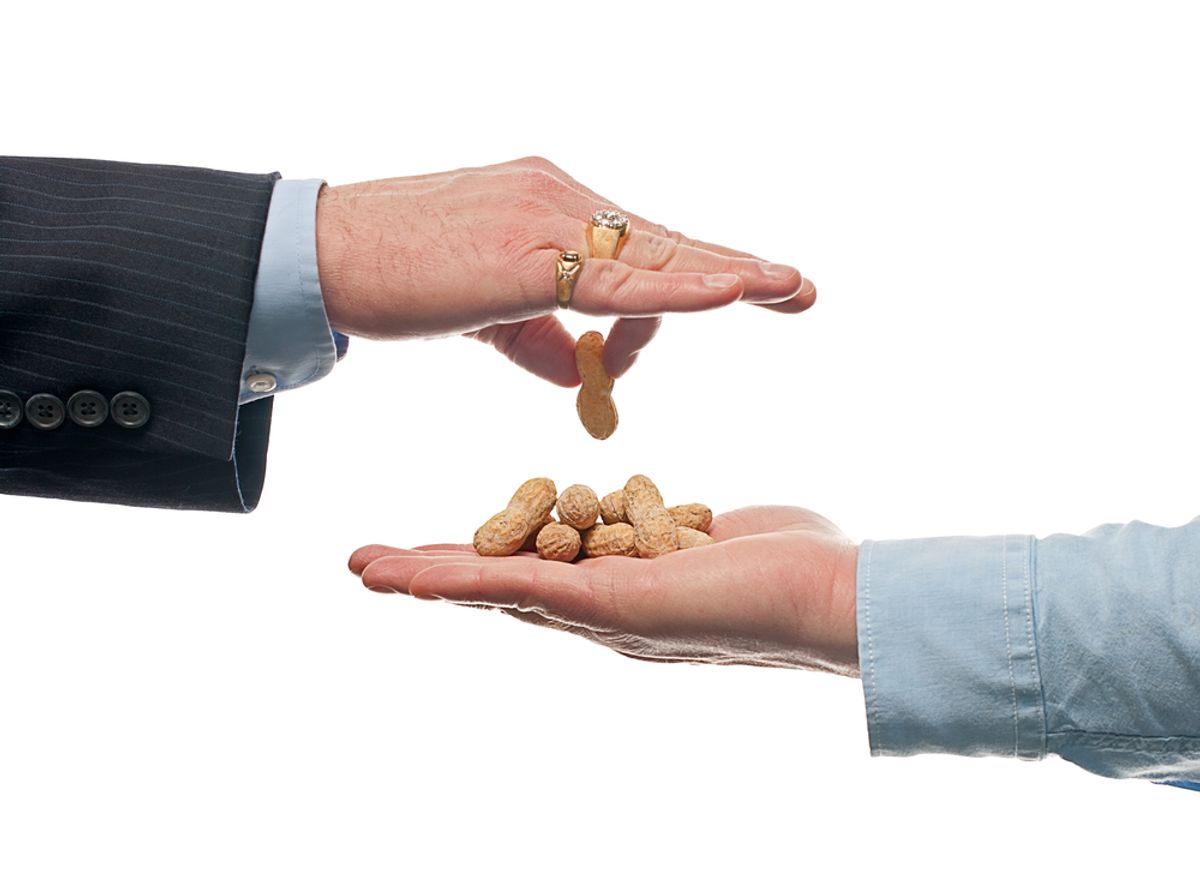 This article originally appeared on Robertreich.org.

The trend toward lousy wages began before the Great Recession. According to a new report from the Economic Policy Institute, weak wage growth between 2000 and 2007, combined with wage losses for most workers since then, means that the bottom 60 percent of working Americans are earning less now than thirteen years ago.

Many of them have jobs. The problem is these jobs just don’t pay enough to lift their families out of poverty.

But wait a minute. Over this same period, productivity has grown by nearly 25 percent. That means the typical American worker is now producing a quarter more output than he or she did in 2000.

So if wages have flattened or declined for the bottom 60 percent, yet productivity has increased, where have the gains gone? Mostly, to corporations and the very rich.

All of which gives some context to the strikes in recent weeks at fast-food chain stores, such as McDonalds, where workers are demanding a raise to $15-an-hour from their current pay of $8 to $10 an hour.

And the demonstrations and walkouts at Walmart stores, whose workers are also demanding better pay. The average Walmart employee earns $8.81 an hour. A third of Walmart’s employees work less than 28 hours per week and don’t qualify for benefits.

They deserve a raise.

At the very least, the minimum wage should be increased from the current $7.25 an hour to $10.50 — and to $15 in areas of the country with a higher cost of living. Had the federal minimum simply kept up with inflation from the late 1960s, it would already be well over $10 today.

Contrary to the predictable pontifications of conservative pundits, such a raise won’t cause many low-wage workers to lose their jobs.

Unlike industrial jobs, these sorts of retail service jobs can’t be outsourced abroad. Nor are they likely to be replaced by automated machinery and computers. The service these workers provide is personal and direct: Someone has to be on hand to help customers and dole out the burgers.

And don’t believe critics who say any wage gains these workers receive will be passed on to consumers in higher prices. Big-box retailers and fast-food chains have to compete intensely for consumers. They have no choice but to keep their prices low.

This means wage gains for low-paid workers are most likely to come out of profits – which, in turn, would slightly reduce returns to shareholders and compensation packages of top executives.

That wouldn’t be such a bad thing.

According to a report by the National Employment Law Project, most low-wage workers are employed by large corporations that have been enjoying healthy profits. Three-quarters of these employers (the fifty biggest employers of low-wage workers) are raking in higher revenues now than they did before the recession.

McDonald’s — bellwether for the fast-food industry — posted strong results during the recession by attracting cash-strapped customers, and its sales have continued to rise. McDonald’s CEO, Don Thompson, was awarded a big-whopper of a compensation package last year, valued at $13.8 million.

Walmart – the nation’s largest employer – also continues to grow despite a sluggish economy, and pays its executives handsomely. The total compensation of Walmart’s CEO, Michael Duke, was $20.7 million last year, up from $18.1 million in 2011. Total sales rose 5 percent to $466.1 billion. Earnings per share rose 10.6 percent.

Not incidentally, the wealth of the Walton family – which still owns the lion’s share of Walmart stock — now exceeds the wealth of the bottom 40 percent of American families combined, according to an analysis by the Economic Policy Institute.

It would not be a tragedy if some of these shareholder returns and compensation packages had to be trimmed in order that low-wage workers at McDonald’s, KFC, and Walmart got a raise.

Indeed, if this nation is to reverse the scourge of widening inequality, such a trimming is necessary.