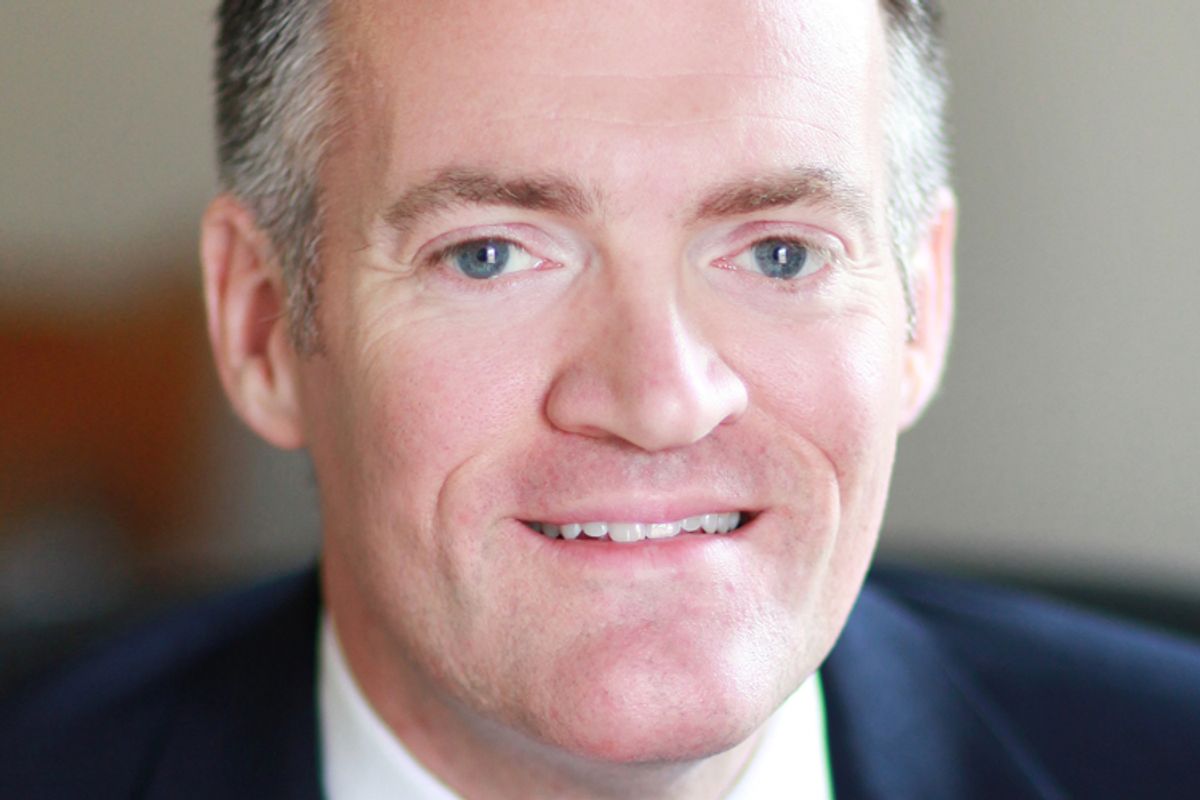 Take a look at the recent flood of legislation states have passed to restrict women's access to basic healthcare, and you'll notice that there's been very little activity out of West Virginia. Unlike neighboring Virginia, West Virginia has largely stayed out of the the national frenzy to use women's reproductive rights as a political football.

But that, unfortunately, may be about to change. In June, West Virginia Attorney General Patrick Morrisey launched an official investigation into the state's two remaining reproductive health clinics that provide abortions. Morrisey's inquiry is a major overstep, reproductive rights advocates say. The kind of regulation he is investigating is, first and most important, already happening, but the move also falls well beyond the purview of the attorney general's legal authority.

While reproductive rights advocates organize against Morrisey's overreach, one West Virginia lawmaker has used the investigation as an opportunity to turn the tables on the attorney general and launch an inquiry into the regulation of the state's crisis pregnancy centers, antiabortion counseling centers that advertise themselves in the same manner as reproductive health clinics to mislead women seeking comprehensive healthcare.

Salon spoke with state Delegate Stephen Skinner about the motivations behind Morrisey's investigation, his own inquiry into crisis pregnancy centers and how he hopes it may lead to greater transparency from these facilities.

So Attorney General Morrisey launches his inquiry into the two abortion providers in your state, and you match him with your own investigation into the operations of crisis pregnancy centers. Was your interest sparked by Morrisey’s inquiry, or was this an issue you had worked on previously?

I first noticed one of these centers 10 years ago in the town in West Virginia where I worked at the time. The place advertised that it offered free pregnancy tests, and seemed to suggest that it was a clinic for women's healthcare. But what really caught my attention was that there were campaign signs for the 2004 election in the windows. It didn't make sense to me that a medical clinic would have campaign signs prominently displayed. But at the time, I just raised an eyebrow and filed this information away.

I started to think about these facilities again last year when I read an article about a crisis pregnancy center moving next door to a women’s health clinic in Charleston, W.Va. It's called "Woman's Choice," and it is right next door to an actual clinic. I started asking around about what exactly these clinics do, and, after doing some independent research, discovered there had been lawsuits across the country accusing some of these places of deceptive advertising and misleading consumers. I had this in the back of my mind in the last six months, and then, out of the blue, the attorney general decides to jump on women's reproductive health clinics in the state.

At the same time, the West Virginia Family Policy Center, a right-wing organization, filed a lawsuit against one of these health clinics. And immediately after filing the lawsuit, the attorney general released his questions scrutinizing how abortion providers are regulated.

It just became so obvious that something was going on, and that this organization was walking step-in-step with the attorney general. Something clicked for me: If these abortion providers are being questioned in this manner, then it is also an opportunity to talk about what is going on at these crisis pregnancy centers.

As you noted, staff at these centers in many other states have been accused of misleading women about the range of their reproductive health options. Do you think your inquiry could be part of a larger movement to encourage greater transparency and accountability from these organizations nationally?

The thing that I’m concerned about in terms of crisis pregnancy centers is that they are actively luring women in who are at a sensitive time in their lives and giving them inaccurate information about their reproductive choices. I'm also concerned that they may be giving out medical advice that could lead to very serious injury or even death.

Right now, we don't know the line between medical advice and proselytizing at these centers. And it's not necessarily an easy issue. As someone who is a fierce defender of the First Amendment, I would fight for these organizations to have the right to assert their religious views; whether I think they are right or wrong, they certainly have the right to advocate.

But when we get to the blurred line of what these centers are offering as actual medical or scientific advice versus what is proselytizing, then we have a problem.

But we don’t have all the facts yet. That’s the purpose of this investigation.

The last three years have been incredibly regressive for women’s reproductive rights in the United States, but it seems like West Virginia has largely managed to buck the trend we’re seeing in other states, where lawmakers have used abortion and women’s healthcare as political wedge issues. Why are reproductive rights suddenly becoming controversial in your state?

By and large, the House of Delegates and the Senate in West Virginia have been under Democratic control for the better part of 80 years. But within the party, there are certainly different factions. And while you’ll find that a majority of the Democratic caucus would personally identify as pro-life, we’ve been able to focus our attention on other issues and come together as a diverse coalition.

Even our last couple of Republican governors have been socially liberal by today’s standards. So, again, abortion has not been a primary focus in our state.

The only Republican to hold statewide office right now is Attorney General Patrick Morrisey, who is coming to West Virginia very plugged into the national Republican Party. What he is doing right now [by targeting abortion providers for political scrutiny] is, to his mind, a way to divide the Democratic Party.

Morrisey has arrived with an agenda, and is setting out to scrutinize these abortion providers even though he has about as much legal ability to regulate abortion as the state treasurer or the state auditor.

Obviously, we have many, many state, federal and private entities that highly regulate the practice of medicine. We have a Board of Medicine that focuses on doctors. There are a multitude of ways that doctors and medical providers are regulated. So why, of all of the medicine that is practiced in our state, the attorney general would use this one specific procedure and say that he is going to examine it for the purposes of regulating it suggests that the motivation is political.

He thinks he’s found the soft spot to divide the state. Abortion is that soft spot. And that is, in part, where we are in West Virginia right now.

Wouldn’t the issue of whether or not crisis pregnancy centers are using deceptive advertising about what services they offer -- and what so-called medical advice is being dispensed by counselors -- be the kind of consumer protection issue that Morrisey has the legitimate authority as attorney general to investigate?

Yes, absolutely. That’s the irony of it. The attorney general is charged with enforcement of the West Virginia Consumer Credit Protection Act, so looking at what could be unfair or misleading consumer practices and how some of these centers may be violating the law is certainly something under the purview of the attorney general. The regulation of medical clinics is not.

Has Morrisey commented on your inquiry yet? I know the questions you sent the 37 crisis pregnancy centers in your state were directly modeled after the ones Morrisey drafted for abortion providers.

No, he hasn't responded yet. He certainly has his own voice and can certainly speak to what I'm doing, but I plan to investigate this issue with the chair of the state health committee in the House of Delegates.

But, certainly, if he was interested, Morrisey would have the discretion as attorney general to look at these centers, though perhaps we could fairly assume that because he's targeting abortion providers and not these centers that he may not be interested.

All of this will depend on the outcome of the inquiry. If there is actual deception, then we will need to regulate these entities in a different way. We may need to require that they give a full disclosure that they are proselytizing and not giving medical advice. That may be where this is going. We have to protect their First Amendment rights, but we have to make sure they are not misleading women who are making very critical decisions about their life and health.

I should also say that some of these centers do very good things by helping out women in need who are having children without a lot of resources. Some of these centers provide clothing and formula and support systems. It is my understanding that this is some of what they do. But we need to find out.

We also need to understand who owns these centers. Where do they get their money? Are taxpayers subsidizing deception?

These are questions I don't yet have answers to, and this is why we need to ask these questions. Ultimately, I hope this starts a conversation across the country about these clinics, though it might be a difficult conversation.

What kind of feedback are you getting from your constituents? Is this something that they’re supporting you on?

Direct feedback from my constituents has been very positive. I also just had the opportunity to spend a lot of time with my colleagues in the state Legislature who were thanking me for doing this. It was actually a staffer this morning who said, “I’d like to talk to you not as a staff member but as a private citizen,” and proceeded to tell me that this is a really important issue to her. Many, many women have reached out to say the same.

I haven't received any direct criticism from my colleagues or constituents, though I am being attacked on social media for supporting abortion rights, which is to be expected.

But I'm going back to my county fair this week and I'll be talking with plenty of people there. We'll see what they have to say then.