The trial of Bradley, the punishment of Chelsea 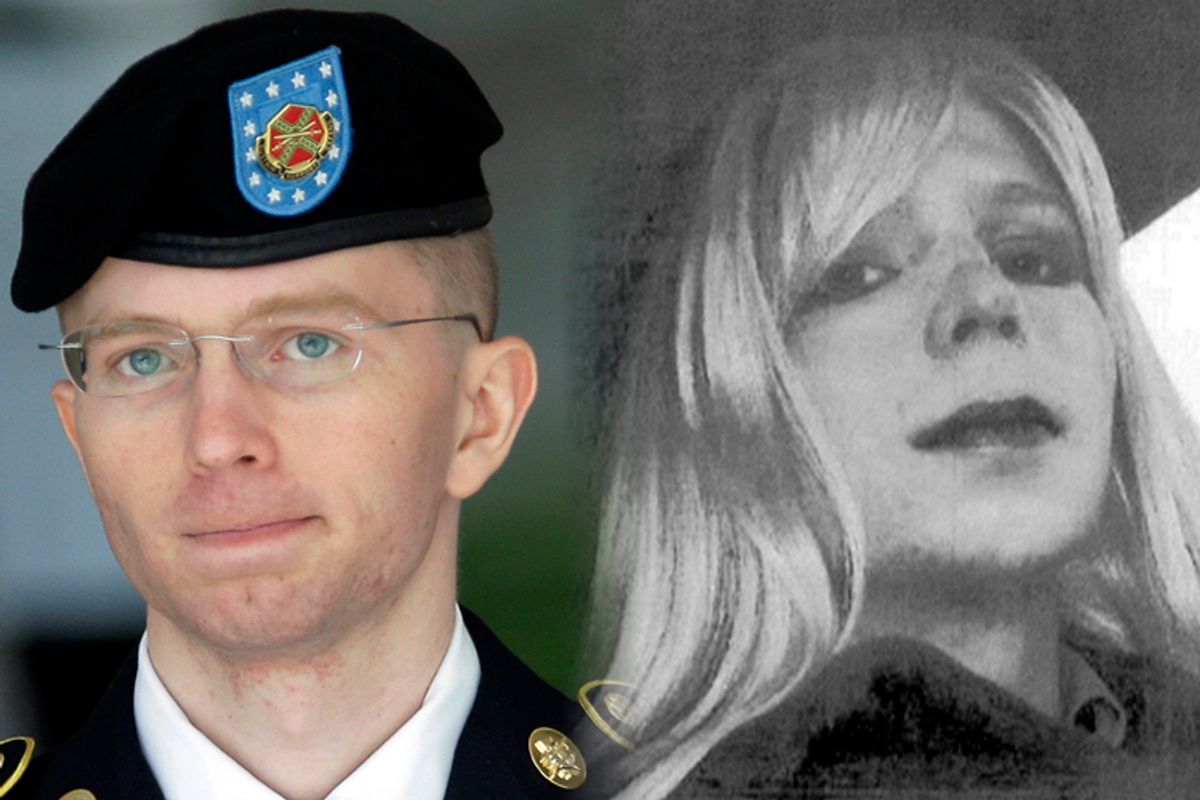 As I wrote during the sentencing portion of the Manning trial, while the court-martial proceedings were ongoing, the status of Manning's gender identity was, for the public, in a Shrodinger's Cat state of indeterminacy: Unable to speak outside the strictures of the case, Manning could not speak as Chelsea. For this sad reason, it makes sense to talk about the trial of Bradley Manning (the spectacle) and the punishment of Chelsea Manning (the trans woman facing decades in a male prison).

In fact, to talk about the trial of Chelsea Manning would be to perpetuate a certain violence: the failure to recognize that during the trial proceedings, Manning was unable to speak from her own chosen gender subject position -- this was a violence carried out against the whistle-blower by the state and one we ought not echo. To speak of the trial of Chelsea Manning would be to underplay the persecution the soldier faced, including living publicly as male and Bradley, at the hands of the military and government. Indeed, as Manning's lawyer David Coombs said this week, following Manning's identification as female, the whistle-blower avoided announcing her gender identity and chosen name during the trial as "People might think it was an effort to get further attention," said Coombs.

However, for any reporters or commentators who had followed Manning's story with a modicum of diligence, Manning's announcement that she wished to "live as a woman" named Chelsea should have come as no surprise. As Matt Sledge pointed out on HuffPo today, aside from references in court testimony by military psychologists to Manning's "gender identity disorder" (a now defunct pathology that has been replaced in the DSM-5 with the less pejorative, but still problematic, "gender dysphoria"), there were signs dating back years and publicly available that Manning may have identified as female. For this reason, there is even less excuse for media outlets to continue to refer to Manning as "Bradley" and "he" when discussing Chelsea in the present. Publications and writers should have been long prepared for the possibility that Manning would identify as female when given the voice to do so -- the three years of pretrial public indeterminacy should have given journalists ample preparation time to work out how to respectfully refer to a trans individual.

But while Chelsea Manning has spoken out, she will in many ways remain silenced in a state of exception: Held in a men's military prison, not provided hormone therapy, and -- for all legal intents and purposes -- interpolated as male in her surroundings. Chelsea will be punished as Bradley according to the vagaries of military justice.

As NBC noted, "Coombs said Manning acknowledges there will be some confusion surrounding his [sic] wish to be known as Chelsea, and that she expects to be known as Bradley as the court-martial is appealed. In order for her to receive prison mail is must be addressed to Bradley Manning.

"There's a realization that most people know her as Bradley," Coombs said. "Chelsea is a realist and understands."