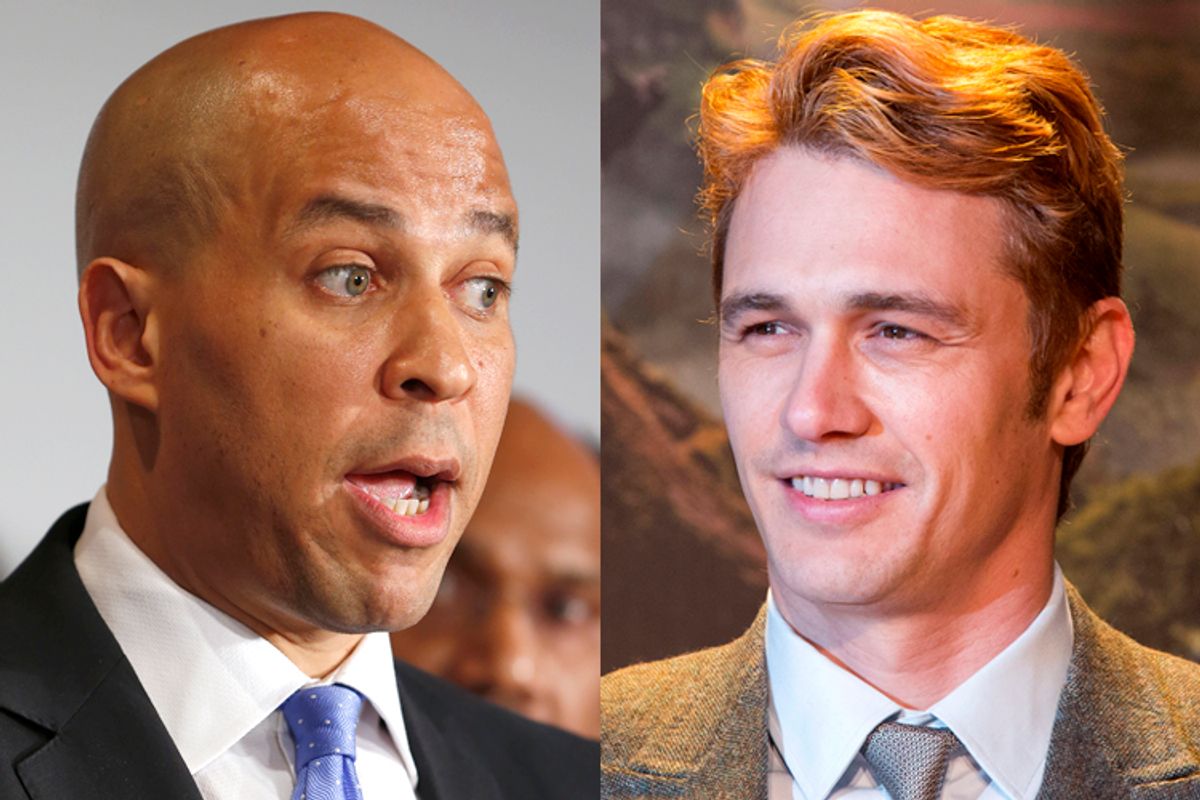 New Jersey Senate candidate Cory Booker has broken his silence about the gay rumors that have sporadically surfaced through his time in public life. He told the Washington Post in a lengthy profile that he has lately been dating women, though in a sphere far more private than the one he generally inhabits:

“Because how unfair is it to a young lady to put them in the spotlight if they haven’t signed up for that yet?” he says. “And people who think I’m gay, some part of me thinks it’s wonderful. Because I want to challenge people on their homophobia. I love seeing on Twitter when someone says I’m gay, and I say, ‘So what does it matter if I am? So be it. I hope you are not voting for me because you are making the presumption that I’m straight.’”

This came before comments by Booker's Republican opponent, Steve Lonegan, that seemed to bait Booker: "It's kind of weird. As a guy, I personally like being a guy. I don't know if you saw the stories last year. They've been out for quite a bit about how he likes to go out at three o'clock in the morning for a manicure and a pedicure." (Booker had previously told a fashion magazine that late-night pedicures are "transformative" -- and that he'd first gotten them with an ex-girlfriend.)

Booker has it both ways in an artful manner that suits his rapid rise in the political establishment, though the point he's making is entirely new: He's at once flirtatiously in touch with his feminine side in a manner that is seen by those who see the world in stereotypes as "gay" or less than "guy-ish," and straight. He's not gay, but he wants you to interrogate why that's a big deal.

"I don't mean to diminish it, but I do think there's something to be said for the correlation between Hollywood and politics," said Michael Bronski, a professor in studies of women, gender, sexuality at Harvard and the author of “A Queer History of the United States." "But you see parallels between Booker and James Franco. They assert their heterosexuality -- and then really turn the question back and say, 'Aren't you asking me about this because it's homophobic?'"

Franco, a Hollywood actor who's reportedly dated women very, very privately, has perpetually teased out -- through art, rather than frank public declarations -- an image of himself as someone who could, plausibly, be gay. (He's also been dogged by gay rumors in recent years.) After appearing as Sean Penn's lover in "Milk," Franco appeared in drag at the Oscars and on a magazine cover; he co-directed a film called "Interior. Leather Bar," based on deleted footage from the 1980s gay-S/M thriller "Cruising." In an interview with a gay publication (pegged to the release of Disney's update of the "Wizard of Oz" franchise), Franco declared: "One of the things that’s very much part of my public image is the question of my sexuality. It’s not something that bothers me in the slightest. It hasn’t gone away and I get asked about it from all sides. It’s partly my doing and partly not my doing." He was roundly mocked at a recent roast for his purported homosexuality -- then told the male roasters he'd had sex with all of them.

Franco, as usual, is not an entirely effective comparison -- he's a bit too sui generis as a public figure to easily fit an analogy. But though the actor and the Senate candidate have played into gay rumors to differing degrees, with Franco purposefully trying to create the impression that he's, specifically, gay and Booker just indulging a taste for the finer things (pedicures, platonic friendships with Arianna Huffington and Gayle King).

However, the pair share an interest in challenging preconceptions at once for a more open society and for personal gain. Contra anyone's expectation, Franco's experimentation has only made him a hotter ticket -- so far this year, he has starred in the blockbuster "Oz" film and the much-talked-about "Spring Breakers," as well as serving as the subject of a Comedy Central roast, the sort of Q-rating-boosting opportunity offered only to recognizable, even iconic, figures. And Booker isn't running for Senate from a generally homophobic state but from one whose Legislature voted in favor of marriage equality (later vetoed by Gov. Chris Christie, the issue is now being argued in court). The upside for Booker, already a popular politician, to speak out against homophobia is high on a statewide level, just as Franco's able to cultivate his fan base by asking America to confront what a gay person looks like.

"Ten years ago, you might see people, really progressive people, saying, 'I'm not gay, but there's nothing wrong with it,'" said Bronski. (For example, former Secretary of Homeland Security Janet Napolitano, who had denied that she is a lesbian when running successfully for governor of Arizona, flatly told the New York Times Magazine in 2009, "I just happen not to be married.")

"Booker and Franco are both grappling with homophobia in a new, different way -- asking how questions of homophobia as structural and political parts of people's lives are being answered now," continued Bronski.

"I think it's very provocative, in a good, post-gay way," said Richard Socarides, political strategist and former Clinton administration adviser. "He is challenging voters, really leading by example, saying in effect, it really should not matter, it does not matter to me and should not to you.

"I don't think we are there yet, but this is what leadership looks like."

Eventually, Booker may or may not marry -- and his personal life will only be under a greater spotlight when he almost certainly enters the Senate. Either way, Booker's a change from the established politicians who dodge questions about their sexuality -- just as Franco's willingness to joke about sexuality distinguishes him from the actors who sue over gay rumors.