Nutrition labels are misleading us

When a sugary cereal like Count Chocula appears to be a healthy choice, you know something has gone terribly wrong 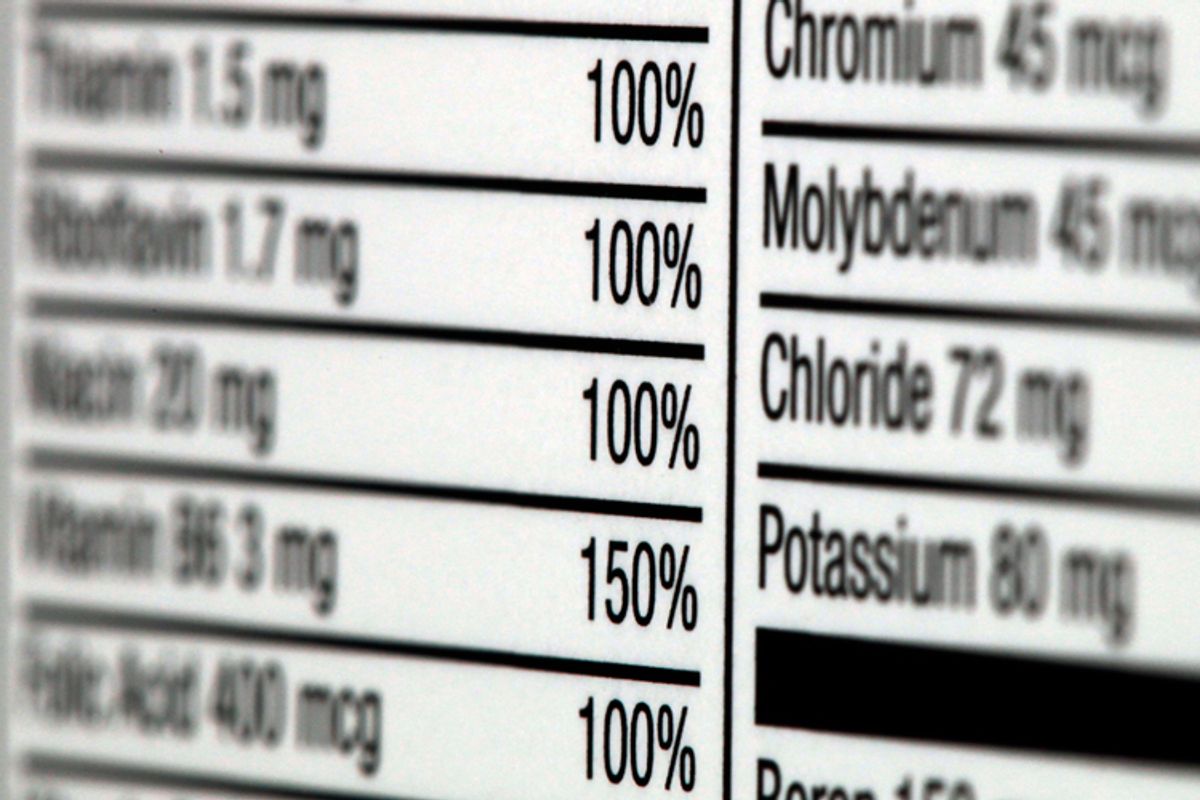 Diane Cary still chuckles when she remembers the scene she witnessed in a supermarket cereal aisle. A mother and her child were haggling over which cereal to get. The mother insisted on Grape Nuts because she felt it was healthy, but the kid desperately wanted Count Chocula. Exasperated, the mom put both boxes side-by-side and proposed they review the nutrition labels and buy the more nutritious of the two.

When Cary passed the family again in another aisle, they had two boxes of Count Chocula in their cart. As it turns out, in a 100-calorie portion, sugary Count Chocula actually packs more of many vitamins than Grape Nuts (although it does have less protein and fiber).

Like the Grape Nuts-loving mom, many health-conscious Americans rely on nutrition labels to inform their food choices. The number of calories, fat, protein, fiber, vitamins, and minerals on the label can determine which box of cereal, loaf of bread, or energy bar one chooses to buy. Unfortunately, sometimes even the most conscientious label-reader can be misled.

A calorie is a calorie is a calorie. Calories in minus calories out equals weight gain or weight loss. Right? So what’s the difference between an equal amount of calories worth of fresh fruit, and, say, Doritos? Or for a more equivalent comparison, between a whole food like oatmeal and a processed food with similar ingredients like Cheerios?

Melanie Warner, author of Pandora’s Lunchbox: How Processed Food Took Over the American Meal, points out even though the foods have the same number of calories, they often provide different levels of satiation. “Say you're eating an equivalent amount of calories of potato chips versus a banana,” she says. “There's no question that you'd feel a lot fuller if you eat the banana. So the calories aren't the same, because you're probably going to have to eat more later in the day to compensate. And then there is also the nutrients. You're getting a phenomenal number of nutrients from the banana. You're not getting any of that from the potato chips.”

Warner refers to a study published a year ago revealing that humans don’t absorb all of the calories in almonds. According to new estimates, almonds have 20 percent less calories than previously thought. What happened to the other 20 percent? They come out our other end, so to speak. Almonds are hard and brittle and a lot of the energy in them is packed within their cell walls, making it partially inaccessible to our digestive systems.

Compare that to many processed foods, which are so easy to chew, swallow and digest that David Kessler, author of The End of Overeating, derides them as “pre-chewed” and “adult baby food.” Warner agrees, saying, “As a general statement, it’s a lot easier for your body to access the calories from processed foods than it is from whole foods.”

Nowadays, label-conscious consumers are privy to a lot of information about the fat in their food. Total fat, calories from fat, saturated fat, unsaturated fat—split into mono- and polyunsaturated fat—and transfats are all listed. Once upon a time, understanding this might have seemed simple. Fat was bad and saturated fat was really bad. Then we learned about transfats, which are the worst kind of fat of all.

Today the picture is more nuanced. Packaged foods advertise good fats: omega-3s. But this is still overly simplistic, and unfortunately, food labels do not provide enough information to make informed choices about fats. The good news is that a look at ingredient lists can help you make better decisions, provided you know your way around fats and oils.

Take saturated fat. Some people believe coconut oil is so healthy they take it as a supplement. But it’s a saturated fat!

“The science is definitely shifting on saturated fats,” concludes Warner. “There was a big negative association to saturated fat and now if you look at a lot of scientific literature...I don't think there's science yet that shows that saturated fat is good. But I think it's a neutral position. There has been a number of meta-studies that show that saturated fat in the diet doesn't contribute to heart disease.”

The term “saturated fat” actually encompasses many different chemicals, chains of carbons that are “saturated” with hydrogen atoms. These chemicals differ in the number of carbons in the chain. Usually when we think of saturated fat, we are talking about long-chain saturated fatty acids with 16 or 18 carbons (palmitic and stearic acid, respectively).

Coconut oil is touted for health benefits because it is rich in medium-chain saturated fatty acids like lauric acid. Yet nutrition labels do not discriminate between palmitic, stearic or lauric acids. All three are lumped together as saturated fats. And nowadays, even stearic acid, found in chocolate, is seen as okay for heart health.

It’s not the total amount of omega-3s or omega-6s we eat that matters, per se, it’s the ratio of the two to one another. The optimal ratio is somewhere around twice as much omega-6s to omega-3s. The amount of omega-6s Americans eat is simply off the charts. Most of our omega-6s come from soybean oil, often labeled as vegetable oil, but other common oils with unhealthy ratios include corn, sunflower, safflower, sesame, cottonseed, and peanut oil.

So you go to the store, you find a bag of organic tortilla chips, and you read the label. How about some Xochitl Mexican-style corn chips? According to the nutrition label, they contain six grams of fat per serving, and of that only one gram is saturated. Presumably, the other five grams are unsaturated.

What kind of unsaturated fat exactly? According to the ingredient list, the chips contain “one or more of the following: canola oil expeller pressed non-hydrogenated and/or safflower oil and/or sunflower oil and/or palm oil.” Great. That’s no help at all. Of the possible oils in the chips, canola has an excellent omega-6 to omega-3 ratio, whereas the others have rotten ones. And you don’t know which of those you are eating.

We all know we need to eat more fiber. Women need 25 grams a day and men need 38 grams, but Americans eat roughly 15 grams each day. Good thing there are Fiber One bars, right? A 90-calorie bar packs five grams of fiber and it’s chocolate-flavored to boot! Yum!

But where’s that fiber coming from? Check the ingredients. Most of it comes from chicory root extract, although whole-grain oats contribute a little bit, too. Food manufacturers like chicory root because it does not negatively impact the food’s taste or texture, and it can even replace fat as it lends a smooth, creamy “mouthfeel.”

The only problem? Chicory root, also known as inulin, “actually does cause gastrointestinal problems with some people,” according to Warner. But, she adds, some processed foods touting high fiber use soluble corn fiber or oat fiber instead. “It’s better than not getting fiber,” she concludes. “But the problem is that if you’re just relying on these added fibers for your fiber content, it’s not ideal because our bodies really need a whole diversity of different types of fiber.”

In other words, your diet might contain your requisite 25 or 38 grams of fiber based on those nutrition labels, but if it all comes from one homogenous source then you aren’t giving your body what it needs.

Michael Pollen wrote about these recently, explaining how fiber is indigestible to us but it feeds our gut microbes, and they break it down into short-chain fatty acids. This feeds our gut lining, called the epithelium. According to a current theory, an improperly nourished epithelium cannot function properly, leading to inflammation and disease.

Let's circle back to the Grape Nuts vs. Count Chocula dilemma. As noted above, if one compares 100-calorie portions of the two cereals, Count Chocula actually packs more of many vitamins and minerals. (Grape Nuts wins out on a few, like potassium.) So does that make it healthy?

Even before we address the vitamins, it’s worthwhile to note that Count Chocula is utterly packed with sugar and little else of value (healthy fats, protein or fiber). The second most prevalent ingredient in the cereal is sugar, and that doesn’t even include the sugar in the marshmallows, which appears separately. It also contains a controversial preservative called BHT.

“The cereal packaging can be incredibly misleading,” Warner says. “One of the rules that I’ve applied to grocery shopping is that if you’re really trying to buy the healthiest processed products out there, do not buy anything that has added vitamins and minerals.” Why? Because if the vitamins and minerals were in the food in the first place, the manufacturer wouldn’t have to add them.

“For breakfast cereal,” she says, “It’s usually the case that either they are not starting out with whole grains that have the vitamins, or the manufacturing process ends up destroying nutrients… They are also adding vitamins that would never exist in cereals as a marketing ploy. It can be very confusing for customers.”

So, you might say: They destroyed the nutrients in the cereal manufacturing process so they added back in. What’s the difference?

“For vitamins that are grown in nature,” explains Warner, “you don’t get them in an isolated form. You get a whole package that goes with them. You’re getting phytonutrients—these plant chemicals that are beneficial. A number of them look to be extremely important… And so far there have been about 10,000 of them identified. Scientists are just starting to study all of their properties and how they are broken down in the body.”

As examples, she names resveratrol, the antioxidant in red wine, and lycopene, a beneficial compound found in tomatoes. One might also add the cancer-fighting chemicals called isothiocyanates we get from broccoli and other cruciferous vegetables. “It’s likely to be the case that these phytonutrients within whole foods are responsible for vitamins that we know being better absorbed by the body, that they all work in concert,” Warner adds.

You average multivitamin or box of fortified cereal might give you every vitamin with a letter of the alphabet assigned to it, but it’s not giving you many of these 10,000 other phytonutrients you get when you eat whole foods like blueberries, tomatoes, apples, or kale.

Believe it or not, Warner is not absolutely against eating all processed foods, or even all breakfast cereal. But given all she knows, she says, “The biggest difference in terms of people’s health is that if you’re just consuming processed foods or taking a multivitamin and thinking ‘I’ve got it covered,’ I think that’s a mistake. You’re just getting a subset of what your body needs.”

The common theme here is that nutrition labels do not tell the full story about a food’s nutrition. If it looks too good to be true, it probably is. A low-calorie chocolate bar is not the answer to all of your fiber needs, and a fortified cereal is not an excuse for skipping out on fruits and vegetables.

When it comes down to it, the bottom line is the same as ever: opt for a wide variety of whole foods when possible. While it might be fun to eat some junk now and again, don’t fool yourself into thinking it’s a health food—even if the label claims it is.