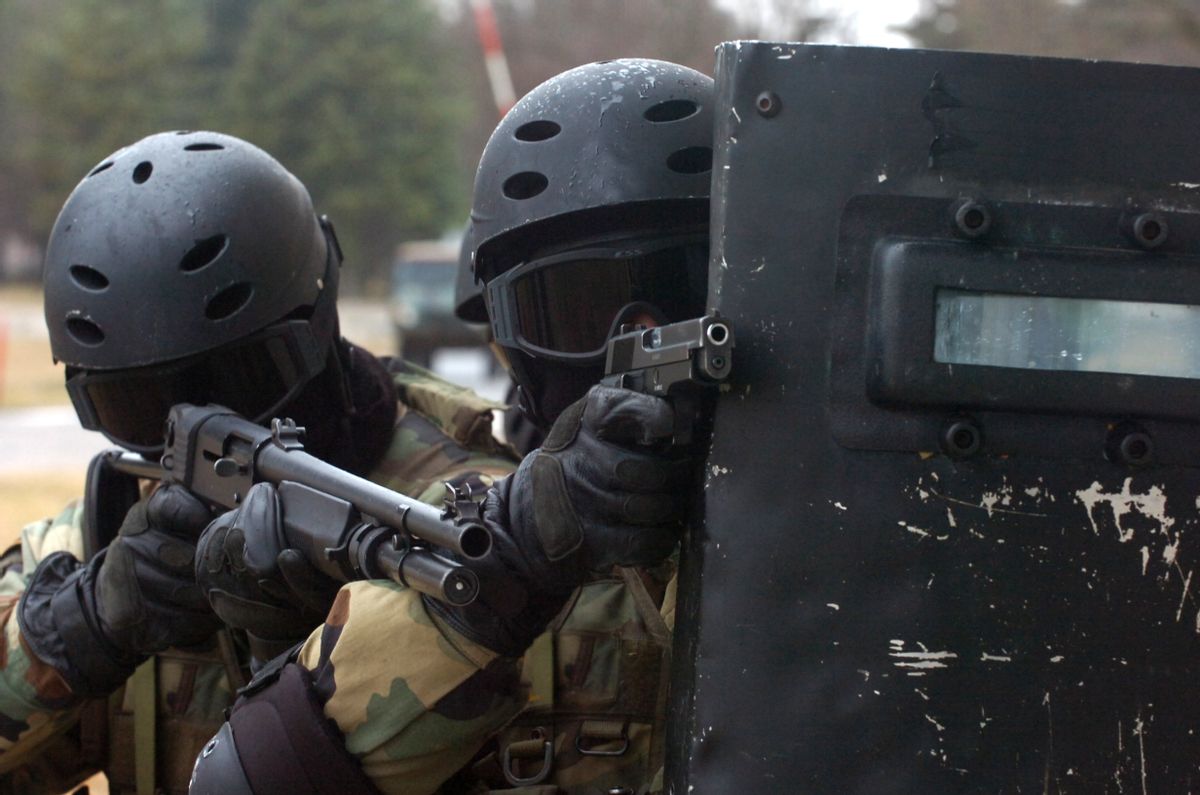 Recently, AlterNet reported on the wrongful police raid of an organic farm suspected of growing marijuana in Arlington, Texas. The massive SWAT team raid lasted for more than 10 hours and resulted in the seizure of vegetables and flowers—but no marijuana was found on the premises.

This is not the first time police have used paramilitary tactics to raid people’s properties to enforce regulatory laws in the absence of any justifiable threat of harm. Here’s a list of the most outlandish SWAT team raids across the county.

Shelter employee Ray Schulze was working in the barn of the Society of St. Francis animal shelter in Wisconsin, when a swarm of squad cars arrived with a search warrant for a baby fawn.

“[There were] nine DNR agents and four deputy sheriffs and they were all armed to the teeth,” Schulze told WISN 12 News.

A family who thought the animal had been abandoned brought the fawn, named Giggles, to the shelter. The agents told the staff they had come to seize the deer because the law forbids possession of wildlife. Schulze explained that the deer was scheduled to go to the wildlife rehabilitation reserve the following day. He believed the officers were going to take the deer to the shelter, but to his horror, the officers returned carrying the baby deer over their shoulder in a body bag.

The supervisor, Jennifer Niemeyer, claimed the law requires Department of National Resources agents to euthanize animals like Giggles because they may be carrying diseases or be dangerous to humans. However, when questioned why the department didn’t just phone the shelter to advise them of the seizure instead of spending resources on a SWAT team, Niemeyer replied: “If a sheriff's department is going in to do a search warrant on a drug bust, they don't call them and ask them to voluntarily surrender their marijuana ... before they show up.”

2. Girl’s home wrongfully raided with flashbangs despite door being open.

In Indiana, a SWAT team raided an 18-year-old girl's house smashing her windows and throwing flashbangs inside, despite the fact that the girl had her front door open and was just watching TV.  In a case of mistaken identity, someone else in the street had signed onto the girl’s open WiFi network and was making threats about police. Once the police realized their error, they advised the girl to secure her WiFi account.

Their target was actually a teenage boy who admitted he had a “smart mouth” and a dislike for cops but denied making any threats. According to Gizmodo, the boy had posted a message that read, “Cops Beware! I’m proud of my country but I hate police of any kind. I have explosives :) made in America. Evansville will feel my pain.”

Federal police in Atlanta used a SWAT team to help the recording industryenforce copyright laws despite the fact that the target was not even involved in commercial piracy operations. The local news reported that a famous mixtape DJ was under investigation for piracy, but supporters say he is not a bootlegger.

Even if the officers had found evidence of piracy, the bigger issue, according toReason, is why the Recording Industry Association of America was part of the police action in the first place and why a SWAT team was used to raid a professional studio under investigation for a “non-violent white-collar crime.”

A low-stakes poker game in South Carolina turned gory after a SWAT team tried to gain access into the home resulting in a 20-minute shoot-out between the players and the police. The game host, 72-year-old Aaron Awty, shot through the front door injuring a sheriff.  The players said was hard of hearing and thought the house was being robbed when he began shooting at the door.

An Austin SWAT team destroyed the home of a man in a search for missing koi fish which had been stolen from the Zilker Botanical Gardens. Eric Philippus said 10 to 12 officers came to his house knocking down the door and drawing guns on his 17-year-old son and his girlfriend. Philippus, who has a koi fishpond in his backyard but wasn’t home at the time of the incident, said he did not steal the fish.

“They’re looking for koi in strange places—in the bedroom, in the closet, places that can’t hold water or fish,” he said. “It’s ridiculous. I love my koi fish more than anything but I never point a loaded gun at anybody over a fish without even checking the information,” he told Stateman.

According to KETV TV, Tibetan monks on a peace mission were apprehended by a SWAT team of immigration officials, in Iowa. The monks had come to the U.S. on a church-sponsored mission to spread the word about the plight of the Tibetan people. However, when they refused to recognize their sponsoring leader as the reincarnation of Jesus Chris and Buddha, they were abandoned.

SWAT agents stormed a Pennsylvania Amish dairy farm wrongfully accusing the owner of selling raw milk interstate. The agents arrived at 4.30am while the owner Dan Allgyer’s family was still asleep and he was preparing to milk the cows. A warrant was served upon him claiming the police had “credible evidence” he was involved in interstate commerce.

9. Police unlawfully invade a series of barbershops without warrants.

In Florida, up to 14 armed police raided over 50 barbershops in predominantly black and Hispanic neighborhoods without warrants.  The police were in SWAT gear armed with masks and guns and police dogs, according to Reuters. Over 30 barbers were handcuffed, in front of customers, on criminal charges of barbering without an active license.

Following the incident, a number of officers were fired for acting unlawfully, with many of the barbers seeking compensation for the mistreatment.

In Georgia, a federal lawsuit was filed against Atlanta police by a gay rights group after 20 to 30 officers dressed in SWAT team attire raided a gay bar forcing patrons to lie on the floor amongst spilled beer and broken glass while running background checks on everyone. The police were looking for illegal activity but found no evidence of public sex, drugs or weapons.

According to the CNN report, the officers included the “Red Dog Unit,” a special force providing “aggressive police presence.” Many of the patrons were threatened with violence and physical harm and subject to anti-gay slurs. No patrons were charged with any crime.  The city of Atlanta eventually agreed to a $1 million settlement with customers and employees of the nightclub.

In Tennessee, federal marshals raided the Gibson Guitar Corporation manufacturing facilities in an effort to charge the owner with trafficking illegally obtained "foreign" wood in its production of guitars. The armed federal agents seized millions of dollars worth of imported wood and ebony without proper notice or a warning or a valid reason:

“We had a raid with federal marshals that were armed, that came in, evacuated our factory, shut down production, sent our employees home and confiscated wood,” CEO Henry Juszkiewicz told NPR.