A party full of rodeo clowns: GOP flips the bird to racial justice

By spurning invitations to celebrate the 1963 March, Republicans show they don't care about seeming racist anymore 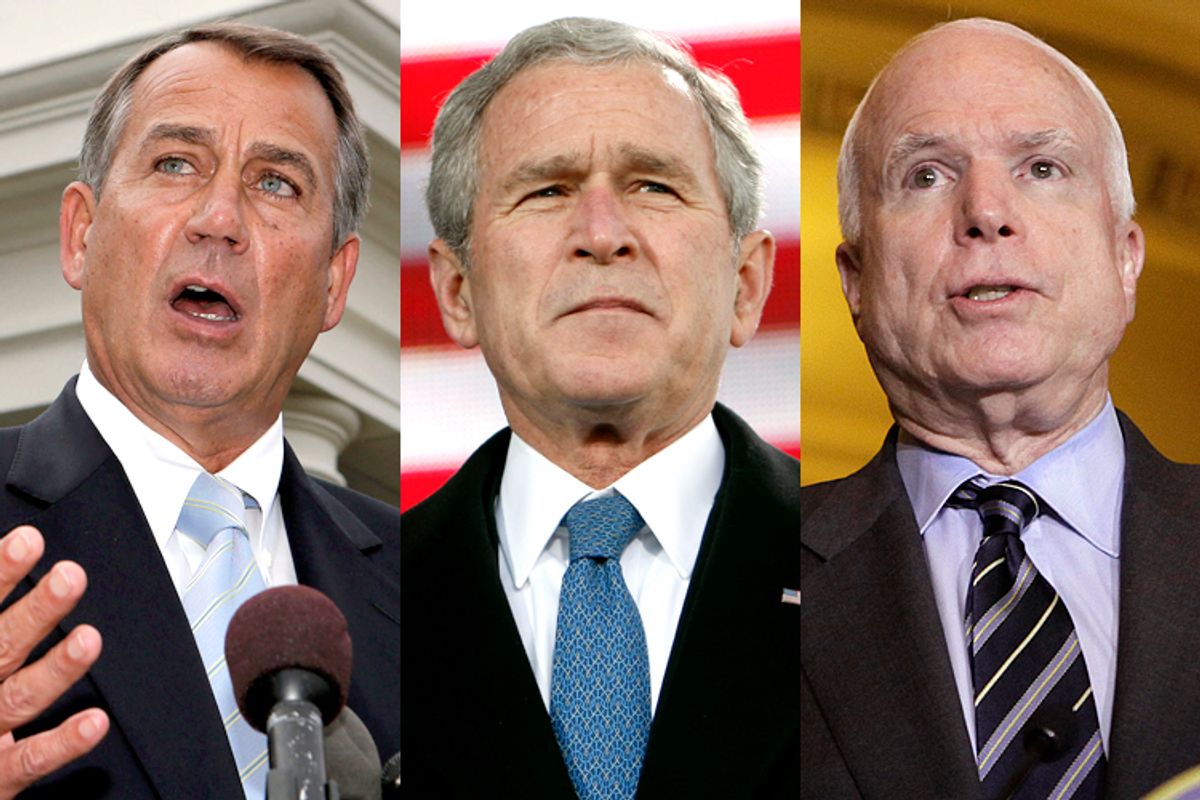 Republicans haven’t been truly competitive for the African-American vote since Richard Nixon got a third of black voters in 1960 against John F. Kennedy, who spent most of that campaign hedging his bets on civil rights. After that, the party of Lincoln actively drove black people into the ranks of Democrats. The testimony of black Republicans who were sidelined, excluded and even attacked at the 1964 convention in San Francisco, when the party nominated the anti-civil rights Barry Goldwater, is painful to read.

In the post-Reagan years, however, Republicans became more careful about blatantly spurning the support of African-Americans, mainly because an image of racial tolerance, at least, was deemed essential to gaining the support of white moderates and independents; soccer moms, it was said, didn’t like overt racism. Then-Republican National Committee chairman Ken Mehlman’s 2006 speech to the NAACP repudiating the GOP’s '60s-era “Southern Strategy” wasn’t designed to seriously challenge the Democrats’ lock on black votes, but to give moderates, and maybe even Latinos, a reason to hope the party was evolving on race.

That’s all behind us. As recently as 2007, I believe, it would have been unthinkable that no major Republican leader would accept an invitation to join Wednesday’s commemoration of the 50thanniversary of the March on Washington. But that’s what happened this week, even though a delusional Bill O'Reilly claimed last night that "no Republicans and no conservatives were invited" to speak. As usual, O'Reilly is wrong: House Speaker John Boehner was washing his hair; wait, he was visiting Wyoming (the sixth whitest state in the U.S., by the way). Majority Leader Eric Cantor, who traveled to Selma with Rep. John Lewis last year, was likewise otherwise engaged. Both Presidents Bush are recuperating from health troubles. Former Florida Gov. Jeb Bush was invited in his brother and father’s stead, but he had other plans. Sen. John McCain also declined.

“We had a very concerted effort, because this is not a political moment,” said Rep. Leah Daughtry, executive producer of the commemoration. “This was about us coming together as a community, so we wanted to be sure that we had all political representations,” Daughtry said. “We attempted very vigorously to have someone from the GOP participate and unfortunately they were unable to find someone who was able to participate.”

RNC chairman Reince Priebus pointed to the fact that Republicans held their own King commemoration Monday, inviting only blacks who are Republicans. Sounds like a fun time -- a separate but equal celebration.

The fact that no leading Republican bothered to attend the 50thanniversary commemoration shows how far to the right they’ve moved on race. It’s not just that they’ve thrown in the towel when it comes to appealing to black voters. They also don’t think it’s worth it to make an extra effort to appeal to white voters who flinch at racism.

Thursday morning’s campaign by some Republicans to make march organizers out to be the real racists, because they didn’t invite South Carolina’s appointed black senator, Tim Scott, represents the usual GOP game of racial tit-for-tat. The fact is, the organizers were reaching out to national GOP leaders, and Scott is not one of them. His hostility to everything the Congressional Black Caucus stands for also makes him an unlikely and provocative choice as speaker.

If Scott asked to speak and was rebuffed, we haven’t heard about it. Nothing stopped him, or any other Republican, from wandering down to the Mall to join the throng. Such a move would have attracted media attention and it would almost certainly have been positive. Reporters are desperate to find signs of moderation and decency in today’s Republican Party.

Unfortunately, Republicans aren’t desperate to display such signs. Right now they’re comfortable with the status quo, in which more than 90 percent of self-described GOP voters are white, in a country that’s barely 60 percent white, and getting less white every day. While MSNBC was broadcasting the Rev. Dr. Martin Luther King Jr.’s 1963 speech in its entirety, former Sen. Jim DeMint of the Heritage Foundation was buffoonishly tweeting: “Would MLK have approved of Obamacare?” DeMint couldn’t be bothered to walk to the Mall and talk to any of King’s actual or political heirs. He’s just another rodeo clown in a party that’s teeming with them.