Older civil rights leaders have achieved so much, but the movement has to make room for the young, not exclude them 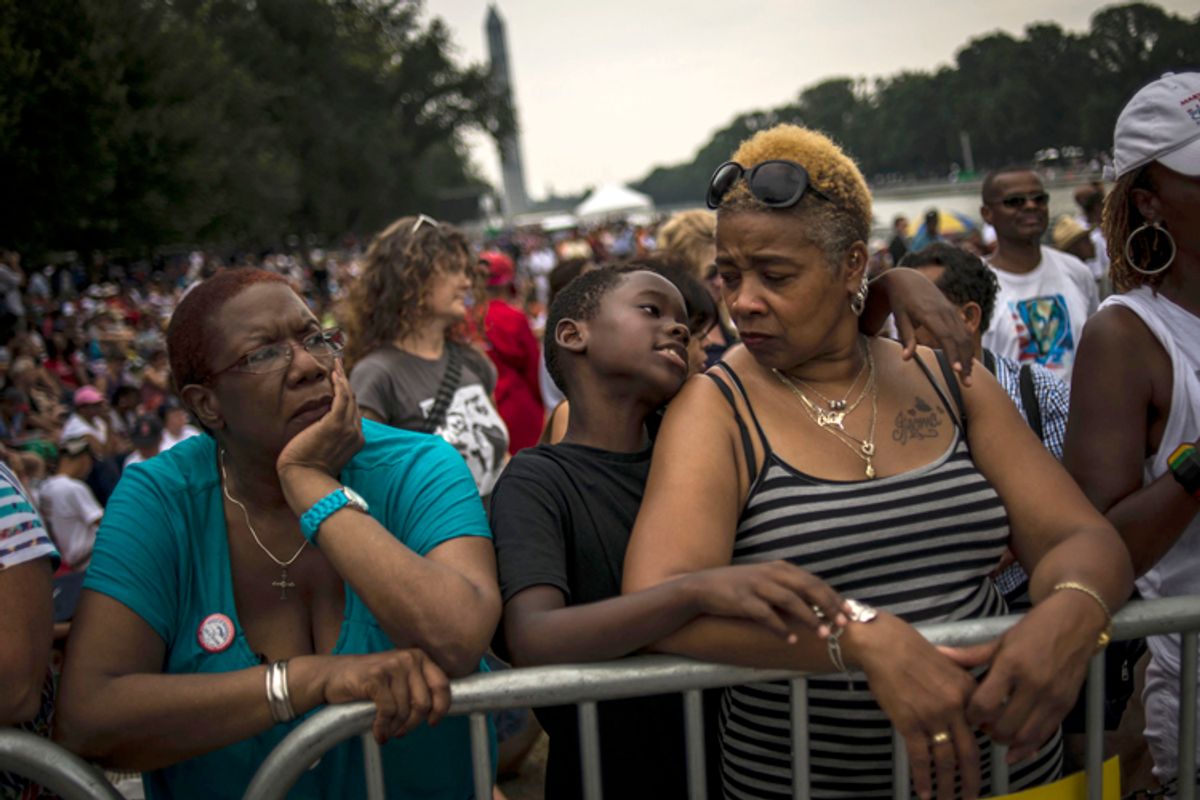 Crowds gather on the National Mall to commemorate the 50th Anniversary of the March on Washington August 28, 2013. (Reuters/James Lawler Duggan)
--

Historically, in times of civic unrest, America has called the young to action because they are strong. They do not tire easily. They have not yet become so tethered to material security that they will not risk what they've amassed for the shot at a better New Deal in the future. We look to the young -- in times of war and systemic oppression -- because, though those of us who are older understand exactly how much they have to lose, we believe that they do not.

But it usually takes quite a while for power to pass from the elders of a movement to its youth. Such a transition has been publicly under way this week, as civil rights leaders have commemorated the March on Washington's 50th anniversary in two separate events. The first, a march organized in part by the Rev. Al Sharpton's National Action Network, on Saturday, allotted time to young adult speakers like Dream Defenders' Phillip Agnew and Mary-Pat Hector of the National Action Network's Youth Division. Youth also tweeted enthusiastically that day, posting photos and protest signs, meeting original members of the 1963 march and drawing inspiration both from nostalgia and present-day political engagement.

It would've made sense to harness that energy leading into yesterday's closing ceremony, which featured President Obama and former Presidents Jimmy Carter and Bill Clinton. Instead, because older leaders took more time than they were allotted, youth speakers like Agnew and Sofia Campos of United We Dream were cut from the roster. Their supporters, mostly composed of millennials, have responded in force, taking to social media to acknowledge their frustration and even going as far as mobilizing toward an eventual Million Millennial March, which would feature a majority of youth leaders as speakers. Dante Barry, a 25-year-old digital strategist based in New Jersey, posted an online appeal to potential organizers. "I was frustrated that young people weren't involved in the planning or organizing of either marches," he told Salon. "We want to be a part of this movement. I attended the march on Saturday, and I felt like there was no next step. Thousands flocked to the Lincoln Memorial frustrated, angry, sad -- because they wanted to know how to act."

Just as elders look to the youth for their enthusiasm, endurance and abandon, young people look to elders for mentoring. When those who are meant to mentor fail to guide their successors toward the next steps in a social justice movement, it's easy for those successors to become disillusioned. The removal of youth speakers from Wednesday's march will definitely be seen as a benchmark of that disillusionment. Said Barry, "It felt like yet again, millennials aren't brought to the table for the issues we care about.  [...] This movement will not progress without those young leaders who will be there to help build it."

Direct action has long been a staple of youth protesting, especially around civil rights in America. The 1963 March on Washington may be the highest-profile manifestation of that, but it certainly wasn't isolated. Hundreds of well-organized nonviolent protests had been carried out before it, and it was precisely owing to the success of those that leaders and participants understood the potential of a gathering of the March on Washington's scale.

Today's youth haven't lost their zeal for direct action. Between the Dream 9's intense, tightly organized, high-profile immigration protest; the Dream Defenders' 31-day sit-in at the Florida state Legislature; young feminists' protest of Texas' Senate Bill 5; and the ongoing weekly protests in North Carolina that have become known as Moral Mondays, millennials have come to expect being able to put their hands to the plow -- and quickly.

It stung to see them slowly phased out of yesterday's events -- but Barry and millennials like him quickly shifted. "In a matter of a few hours' time, over 150 young people from all across the country signed their names on a Google group list [as a first step toward organizing our own march]. Young people are frustrated. They have skyrocketing student debt, jobless, homeless, incarcerated, educated poorly. It is time for young people to be involved in discussions about this country's future."

It's too early still to know whether this march will actually occur -- but in the event that it does, we can only hope that the youth haven't lost their faith in coalition-building with elders. Intergenerational cooperation is paramount for success in today's civil rights fight. The summer's earlier movements -- all of which were led by youth, some of which (like Moral Mondays and the Texas Senate Bill 5 protest) were more heartily supported by older generations -- have resulted in concrete progress. Rather than the old and the young engaging in a mobilizing tug of war, it would be best for them to tie their goals together. Let the circle be unbroken.