Should Tim Scott really have been at the march?

He is the only black senator, but so much of his political agenda is at odds with the modern civil rights movement 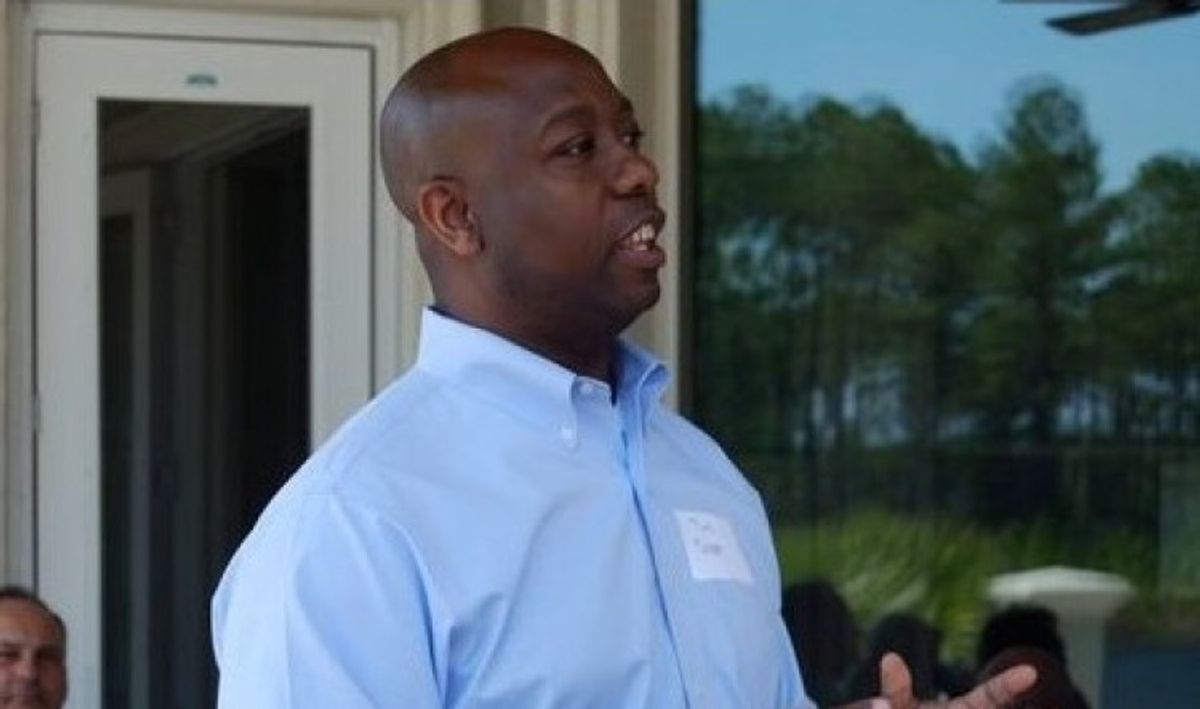 Sure, zero Republicans may have turned out for Wednesday's march commemorating Martin Luther King Jr., but the march organizers were the Real Racists for failing to invite South Carolina Republican Sen. Tim Scott, the only African-American in the Senate, conservative talking heads tried to claim today.

Well, as it turns out, Scott was in fact invited to attend, but declined. “Thank you for extending to Senator Tim Scott the invitation," a aide responded to the invitation, according to emails obtained by Roll Call's Emma Dumain. "Unfortunately, the Senator will be in South Carolina during this time, so he will be unable to attend the event."

So ... outrage repealed, right? Turns out he was invited all along.

Of course not. Maybe he was invited to attend but he should have been invited to speak, some conservatives responded. "Sen. Angus King, a white guy from Maine, got a speaking slot at the march yesterday. Sen. Tim Scott got a form letter," TownHall editor Kevin Glass tweeted.

Actually, maybe he shouldn't have. USA Today columnist DeWayne Wickham came under fire for saying this on CNN today: “He’s one of 50 Senators. And he’s appointed not elected."

I don't know Scott so I can't speak to the content of his character (I'm sure he's a decent guy), but the content of his political agenda is pretty clearly at odds with that of the modern civil rights movement. Yes, he's black, but as Joan Walsh noted, "The fact is, the organizers were reaching out to national GOP leaders, and Scott is not one of them. His hostility to everything the Congressional Black Caucus stands for also makes him an unlikely and provocative choice as speaker."

Perhaps the biggest issue facing the movement today is voting rights, and fighting the effort to restrict them. Where's Scott on this? He supported the Supreme Court's decision to essentially throw out the Voting Rights Act, saying, "punishing six Southern states because of past failures does not help us in the present and certainly does not help find our path to the future." And he criticized the Department of Justice for challenging South Carolina's voter ID law.

How about on LGBT rights, which have become a key part of the civil rights agenda and were well represented at Wednesday's march? Scott is a staunch social conservative. He got a zero out of 100 on the Human Rights Campaign scorecard, and opposes marriage equality, supported the Defense of Marriage Act, etc.

On gender equality, he voted against the Violence Against Women Act and has a "perfect" pro-life record.

He has an "F"-rating from the NAACP. "We have Republicans who believe in civil rights -- unfortunately he is not one of them," NAACP president Ben Jealous said of Scott in January.

Some argue, as Scott and many other conservatives have, that today's civil rights movement is a corruption of King's movement, and has nothing to do with real civil rights, whatever they might be. But thousands of people and millions more at home -- in other words, the people for whom the movement is fighting -- don't seem to think that.

And if the people who organized the rally and attended the march are really part of a "far-left grievance industry," as Bill O'Reilly claims, then why would Scott even want to be associated with them? And why would conservatives be offended that he wasn't invited?

The civil rights movement is a movement for a core set of rights, and Tim Scott doesn't support many of them. So why should it give him a venue to speak?