It's "Twilight": YA movies are totally over!

As "The Mortal Instruments" tanks, it's time to get past fantasy stories about heroes destined for greatness 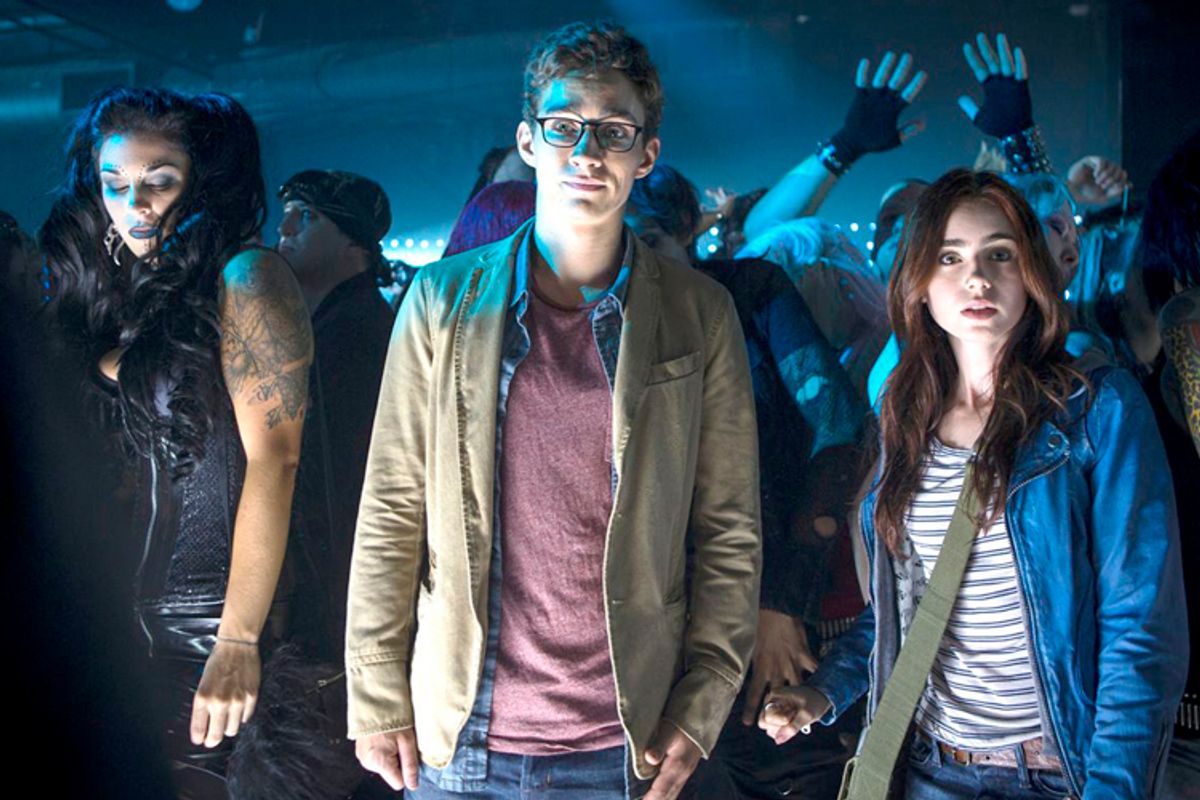 The failure of the paranormal teen film "The Mortal Instruments: City of Bones" to deliver much in the way of box office receipts over the weekend has provoked a lot of comment. The film, based on the first in a series of novels by Cassandra Clare, features a story that combines elements of such popular franchises as Harry Potter (secret boarding school for kids with supernatural abilities) and "Twilight" (heroine torn between two hot guys with supernatural abilities). The "Mortal Instruments" books have sold upwards of 24 million copies.

So when "The Mortal Instruments: City of Bones" grossed only $9.3 million on its opening weekend, observers blamed the poor showing on everything from a "fickle" target audience (president of distribution at Sony Pictures Entertainment, the studio that made the film) to paranormal-romance fatigue, in what sounded like a bit of wishful thinking on the part of BuzzFeed's Jordan Zakarin. Several other film adaptations of popular YA fantasy books have also tanked. There are those who maintain that this is because the movies just haven't been any good, but that hasn't stopped many a film from becoming hit. Still others, like Dorothy Pomerantz at Forbes, point out that the kids' and teen book series that have gone on to become box office powerhouses (the Harry Potter books, "Twilight," "The Hunger Games"), have all enjoyed sizable adult readerships and fanbases before arriving onscreen.

But one of the most intriguing explanations came from Gina Dalfonzo at the Atlantic. In "The Formula That's Ruining Your Teen Movies," Dalfonzo suggests that the Chosen One, a story motif that has been a "staple of the film industry since that industry came into being" has worn out its welcome. "So many supernaturally themed permutations of it been force-fed to so narrow a demographic in so short a space of time," she argues, that "teens might be starting to get bored" with it.

Teens aren't alone in that! As Dalfonzo acknowledges, the "hero's journey," a plot formula devised by mythologist Joseph Campbell and most famously employed by George Lucas in "Star Wars," has become a Hollywood cliche. What once seemed to resonate with the deepest structures of storytelling has now become lifelessly automatic. You hear screenwriters talk about the various components in the hero's journey ("Call to Adventure," "Meeting with the Goddess," "Crossing of the First Threshold," etc.) the way a cook recounts a recipe for pea soup. Not that there isn't a certain art to making pea soup, but let's face it: not that much.

It's gotten to the point that I've found myself audibly groaning whenever the lumbering mechanisms of the hero's journey start to take over a film. This is most obvious, and most annoying, in your basic superhero picture, as yet another forgettably square-jawed actor grinds through his origin story, his confrontation with the supervillian, his embrace of his mission, the broody bit about the "great responsibility" yadda yadda, all the way up to the part where some splendid landmark of the past gets leveled in order to rescue the world. And it's always the the whole world that's being saved, even if it has to be reduced to rubble in the process. As screenwriter-producer Damon Lindelof told Vulture earlier this month, "Once you spend more than $100 million on a movie, you have to save the world. And when you start there ... you are very limited in terms of how you execute that."

You can see why this formula appeals to teens, people facing the daunting process of reaching adulthood in a confusing world. The idea of being fated for greatness (however much a fictional character may resist the call in preference for a normal life), has got to be reassuring. But the problem with the Chosen One motif is that it fosters not only the notion that we are born with our achievements predetermined, but also that significant lives are the birthright of only a destined few. The rest of us are just canon fodder and rescue objects.

But what to do about the Chosen One trope? Probably the most beloved fictional character of our time, Harry Potter, is a flagrant example of it. Even if the flavor in this particular stick of gum feels chewed out, what will replace it? Adult audiences forsook overblown, world-saving adventure movies this weekend for a film about the everyday fortitude of an African-American butler, what about the kids? Dalfonzo suggests that they might want to see, and read about, young characters "just being kids," but it seems unlikely that huge numbers of them will suddenly develop a passion for quieter, realistic books and films about relationships.

The book I wish I'd had as a fantasy-loving child reader is China Mieville's "Un Lun Dun." You can find a full review of the novel here, but what's most important in this context is that Mieville doesn't just ditch the Chosen One motif, he actively critiques it. "Un Lun Dun" is the story of two 12-year-old girls, Zanna and Deeba, who stumble into an alternate London filled with various broken parts of the original London. It's a wondrously grotesque realm where mangled umbrellas come to life, an animated milk carton can become a loyal pet and buildings are shaped like top hats or clenched fists.

It's also oppressed by a sinister enemy, and the residents of UnLondon recognize Zanna as the Shwazzy, or Chosen One, prophesied to be their savior in a magic talking book. They gather around her, thrilled and awed and expectant, and when Zanna insists, "I'm just a girl ... None of it makes sense," she's told, "That's how prophecies work. They're not about what makes sense; they're about what will be."

But Zanna proves a complete failure at fighting UnLondon's enemies, and when the girls escape back home, only Deeba remembers the UnLondoners and their desperate plight. "UnLondon would have to look after itself," she thinks. "She wasn't the Shwazzy. She was just someone. How could just someone be any help?" The she tells herself "Besides, even if something terrible does happen, you don't need to know about it."

What changes Deeba's mind about returning to UnLondon isn't destiny or fate, but shame (at her own willingness to look the other way) and conscience. Of course she goes back and, as "just someone" with a few other someones at her side, she helps to save not the whole world, but a weird and marvelous part of it. What makes Deeba a hero isn't magical abilities or a formative traumatic experience or an ancient prediction in rhyme or being the secret descendent of a clan of powerful wizards. It's simply her compassion and her character. And her choice.

The Wall Street Journal on the disappointing box office returns of "The Mortal Instruments: City of Bones"

Jordan Zakarin for BuzzFeed on the perils of "Twilight" wannabes