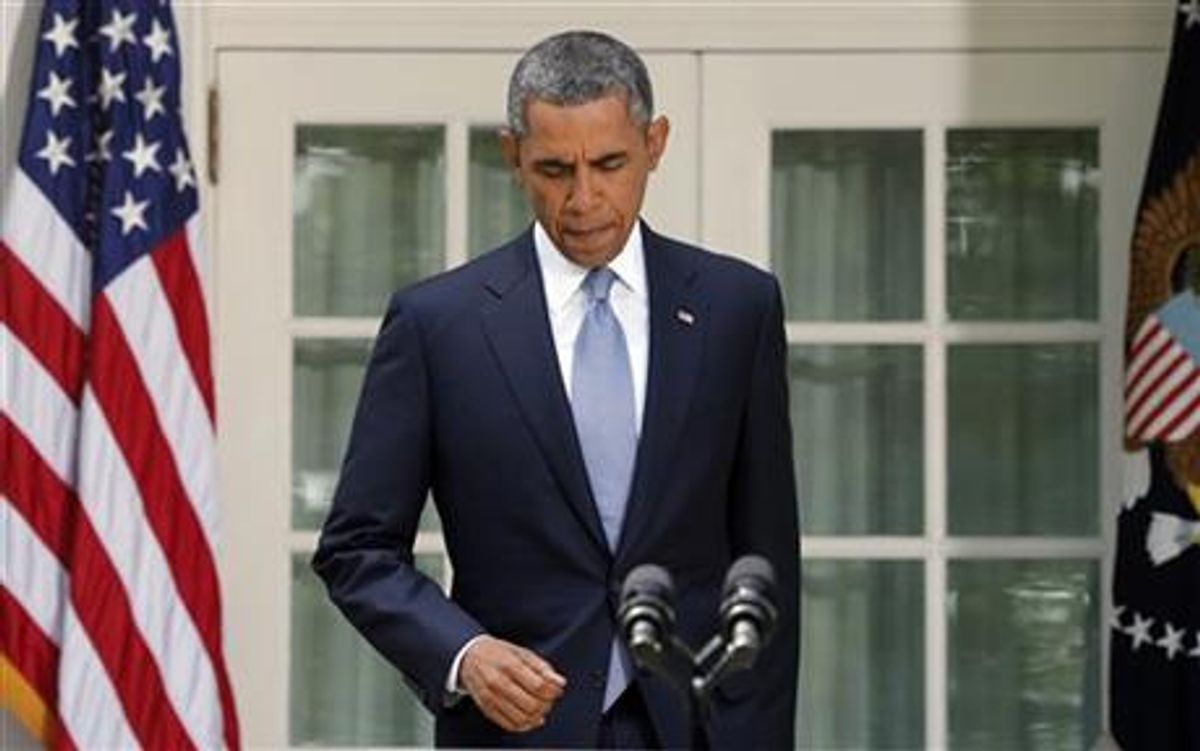 The Obama administration countered that its case for military action against the regime of Syrian President Bashar Assad is getting stronger, saying it now has evidence that the toxic gas allegedly used in strikes on rebel-held areas was the nerve agent sarin.

The administration predicted Sunday it will obtain congressional backing for limited strikes. After days of edging closer to military action against Syria, Obama suddenly announced Saturday he would first seek approval from Congress, which gets back from summer break Sept. 9.

Assad, in turn, tried to project confidence in his escalating showdown with the U.S., saying in comments carried by state media Sunday that Syria is "capable of confronting any external aggression."

From the sidelines, others exhorted the U.S. either to get involved or stay out of the brutal two-and-a-half-year-old conflict that has claimed more than 100,000 lives and displaced millions of people.

At the Vatican, Pope Francis said he would stage a worldwide prayer vigil for Syria on Sept. 7 and called on all sides to lay down their arms.

"My heart is deeply wounded by what is happening in Syria and anguished by the dramatic developments" on the horizon, Francis told crowds in St. Peter's Square, forgoing the usual religious theme of his weekly address.

The main Syrian political opposition, which operates largely from exile, warned that Obama would give dictators in Iran, North Korea and elsewhere a free pass to commit atrocities if he does not punish Assad.

In the Syrian capital Damascus, some said the reprieve from Washington was only prolonging their torment.

A 29-year-old city resident said he reinforced his window with tape in anticipation of an imminent attack.

"I know people who prepared sleeping pills to give to their kids the night of the attack so they can sleep and not be scared," said the man, who only gave his first name, Nasib, for fear of reprisals.

Nearly two weeks after the alleged chemical weapons attacks on areas east and west of Damascus, many unanswered questions remain.

Neither the U.S. nor the Syrian regime, which blames rebels for the attacks, has publicly presented proof.

Syria's deputy foreign minister, Faysal Mikdad, claimed Sunday that Obama stepped back from his threat to attack because he lacks evidence of Syrian government involvement in the Aug. 21 attacks.

"The hesitation and the disappointment is so obvious in the words of President Obama yesterday," Mikdad told reporters in Damascus. "The confusion was clear as well."

Yet despite the official hubris, there were signs the regime was taking precautions.

The main Western-backed opposition group, the Syrian National Coalition, said the army moved troops as well as rocket launchers, artillery and other heavy weapons inside residential neighborhoods in cities nationwide. The coalition said Assad ordered detainees to be moved to military targets for use as human shields against U.S. strikes.

Three Damascus residents, speaking on condition of anonymity for fear of reprisals, confirmed such movements.

One man said two members of the elite Republican Guards broke into an empty house he owns, showing him an official paper stating they were authorized to do so because Syria is at war. He said he bribed the soldiers and they left. A woman in another area said soldiers moved into a school next to her house and she was terrified.

In Washington, U.S. Secretary of State John Kerry tried to sharpen the arguments for military action Sunday in a serious of appearances on television news shows.

Kerry said he expected American lawmakers to recognize that the "credibility of the United States is on the line."

He said President Barack Obama has the authority to launch retaliatory strikes with or without Congress' approval, but Kerry stopped short of saying the president would do so if the House or Senate withholds support.

"The stakes are just really too high here," Kerry said. "We are not going to lose this vote."

A White House draft resolution asks Congress to authorize force to "deter, disrupt, prevent and degrade" the Assad regime's ability to use chemical weapons. It doesn't lay out a timeline for action.

Kerry also said the United States has received hair and blood samples from first responders indicating that Syria's government forces used sarin in the Aug. 21 attacks. It was the first piece of specific physiological evidence cited by the administration.

Previously, the U.S. only said regime troops fired rockets carrying an unnamed nerve agent at the Damascus suburbs, killing at least 1,429 civilians, including more than 400 children.

The Syrian Observatory for Human Rights, a Britain-based group that collects information from a network of anti-regime activists in Syria, has said it has only been able to confirm the names of 502 dead. It has challenged the U.S. to release the information that led to the higher toll.

Obama has said that in making his final decision, he will not wait for findings by U.N. chemical weapons experts who collected biological and soil samples in the stricken areas near Damascus last week.

U.N. chief Ban Ki-moon asked the head of the team on Sunday to expedite the testing of the samples and report back to him as soon as possible, U.N. spokesman Martin Nesirky said.

The samples will be sent Monday to laboratories around Europe, he said, adding that he could not say when the results will be in.

Ban has said no action should be taken before the U.N. team has presented its findings. However, U.S. officials have argued that there is no doubt chemical weapons were used, and that it's not part of the U.N. inspectors' mandate to determine who fired them.

In Cairo, the 22-state Arab League was holding an emergency session on Syria. The Saudi Arabian foreign minister, Saud al-Faisal, prodded member states to back international measures against the Syrian regime to "deter this aggression by all possible means."

If the world does nothing, the Syrian regime will be encouraged to "go on with its crimes," he said.

However, it appeared unlikely the League would back Western military action, since key members, including Egypt, are opposed.

In Israel, Prime Minister Benjamin Netanyahu said his country is ready for "any possible scenario," a reference to fears of Syrian reprisals against Israel in the event of a U.S. strike on the Assad regime.