Frost, a veteran journalist and broadcaster, won fame around the world for his TV interviews with Richard Nixon 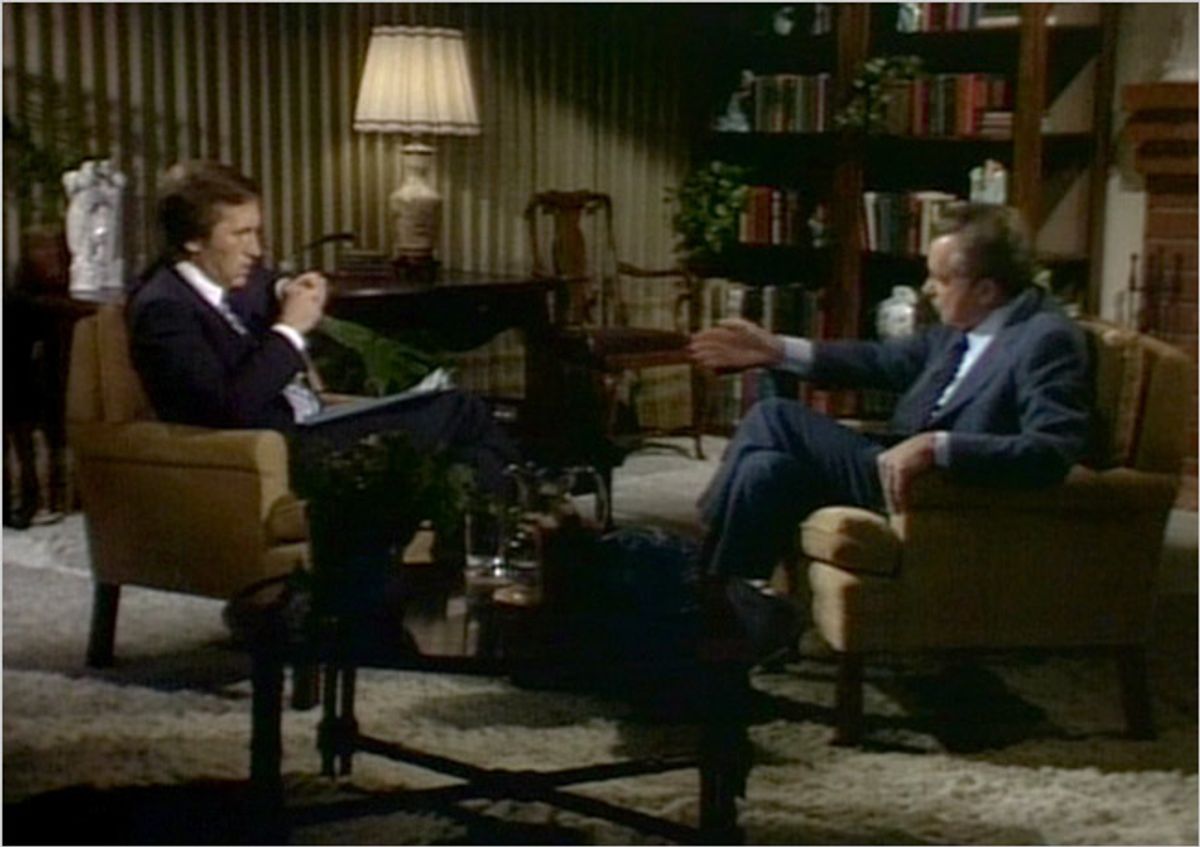 LONDON (AP) — Veteran British journalist and broadcaster David Frost, who won fame around the world for his TV interviews with former President Richard Nixon, has died, his family told the BBC. He was 74.

Frost died of a suspected heart attack on Saturday night aboard the Queen Elizabeth cruise ship, where he was due to give a speech, the family said. The cruise company Cunard said its vessel left the English port of Southampton on Saturday for a 10-day cruise in the Mediterranean.

Known both for an amiable personality and incisive interviews with leading public figures, Frost's career in television news and entertainment spanned almost half a century. He was the only person to have interviewed all six British prime ministers serving between 1964 and 2007 and the seven U.S. presidents in office between 1969 and 2008. Outside world affairs, his roster ranged from Orson Welles to Muhammad Ali to Clint Eastwood.

Prime Minister David Cameron was quick to send his condolences, praising Frost for being an "extraordinary man with charm, wit, talent, intelligence and warmth in equal measure."

"The Nixon interviews were among the great broadcast moments — but there were many other brilliant interviews," Cameron said. "He could be — and certainly was with me — both a friend and a fearsome interviewer."

The BBC said it received a statement from Frost's family saying it was devastated and asking "for privacy at this difficult time."

Frost began television hosting while still a student at Cambridge University. He went on to host the BBC's satirical news show "The Week That Was" in the early 1960s, and, later, a sketch show called "The Frost Report" and a long-running BBC Sunday show, "Breakfast with Frost." His signature, "Hello, good evening and welcome" was often mimicked.

While popular in Britain and beginning to launch a career on U.S. television, Frost did not become internationally known until 1977, when he secured a series of television interviews with Nixon.

The dramatic face-to-face was make-or-break both for him and for the ex-president, who was trying to salvage his reputation after resigning from the White House in disgrace following the Watergate scandal three years earlier. At the time, it was the most widely watched news interview in the history of TV.

The interviewer and his subject sparred through the first part of the interview, but Frost later said he realized he didn't have what he wanted as it wound down.

Nixon had acknowledged mistakes, but Frost pressed him on whether that was enough. Americans, he said, wanted to hear him own up to wrongdoing and acknowledge abuse of power — and "unless you say it, you're going to be haunted for the rest of your life."

"That was totally off-the-cuff," Frost later said. "That was totally ad-lib. In fact, I threw my clipboard down just to indicate that it was not prepared in any way ... I just knew at that moment that Richard Nixon was more vulnerable than he'd ever be in his life. And I knew I had to get it right."

After more pressing, Nixon relented. "I let the American people down and I have to carry that burden with me for the rest of my life," he said.

The dramatic face-off went on to spawn a hit play. And in 2008, a new generation was introduced to Frost's work with the Oscar-nominated movie "Frost/Nixon," starring Michael Sheen as Frost and Frank Langella as Nixon.

Frost was born on Apr. 7, 1939, the son of a Methodist preacher. Besides hosting, he set up his own company, which gave birth to many more popular British programs.

"Breakfast with Frost" ran on the BBC for 12 years until 2005, and the game show "Through the Keyhole" from 1987 to 2008. He had recently been working for Al Jazeera International.