The Ted Cruz effect: How one man destabilized the government

Certain norms have held together America's legislative governance for nearly a century. They're now being destroyed 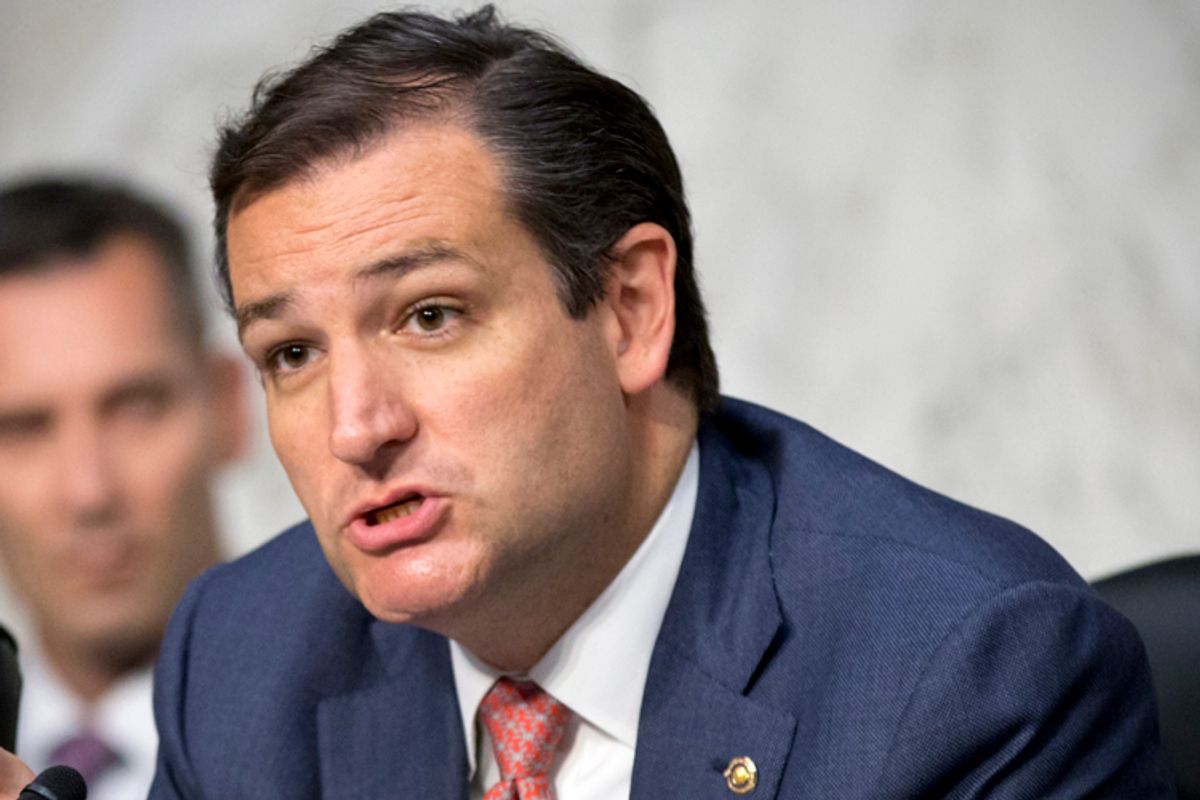 Late in August, Sen. Ted Cruz, R-Texas, traveled to a private residence in Dublin, N.H., to headline a fundraiser for the state Republican Party. Cruz's spiel lasted about an hour, and was packed with the mix of straw men and inflammatory nonsense we've come to expect out of the junior senator from Texas.

But before he really got into it, he took a moment to say a few nice words about his GOP colleague from the state, who was also in attendance.

"Kelly Ayotte is a rock star," Cruz said. "Let me tell you, your senator is as tough as granite. There is no stronger advocate of the men and women in our military in the U.S. Senate than is Kelly Ayotte, and there is no one tougher going to get the truth about what happened in Benghazi than Kelly Ayotte."

Insincere camaraderie is a fact of life that's been with us since the Senate invented it in 1804, so in most senses Cruz' remarks aren't a big surprise. But they belie an invisible, and real, division between Cruz's wing of the party and the core of the Senate GOP that Ayotte (who's no objective person's example of a RINO) represented that night.

Cruz is a Republican, and in that capacity, serves as a vice chair of the National Republican Senatorial Committee, whose job it is to maximize GOP representation in the Senate. But he's also closely aligned with outside organizations like Heritage Action, and the Senate Conservatives Fund -- groups that support and fund primary challenges against Republicans in good standing and otherwise work against official party goals. In 2010, before Cruz entered the national scene, SCF endorsed Ayotte's opponent in 2010.

In 2013, Cruz is SCF's shining prince -- the archetype to which they want all other Republican senators to aspire. For the moment that means signing a letter pledging to oppose any measure to fund the government unless President Obama agrees to neuter his own healthcare law. Cruz is building his reputation on the right by taking on Republicans who don't agree with that strategy. Ayotte initially signed it, but has since withdrawn her name.

This kind of self-directed gamesmanship, perhaps more pronounced in the House than in the Senate, is part of the reason the party keeps lurching rightward -- driving out moderates, making stars of controversial radicals, and at times throwing safe seats to the Democratic Party. The question is, can that dynamic hold without splintering the party in a more consequential way.

David Karol is a professor at the University of Maryland who studies factional politics in the United States.

In his view, the internal divisions of a congressional majority (or even a large Senate minority) are to be expected. But there's something new about the intensity of the division in the modern GOP.

"Moderate-extreme division isn't new," Karol explains. "But people on the extreme are more extreme now than they were. There was a time when we weren't going to shut down the government, impeach the president, that if you do anything with the president you weren't radioactive. Now, doing anything collaborative, anything across the aisle, means you're suspect, courting a primary challenge. That atmosphere did not exist to the same degree."

Karol doesn't think what we're seeing now will result in mass defections or the emergence of a third party. But it suggests than the realignment that drove more moderate GOP senators like Arlen Specter and Olympia Snowe from the party, and that has pitted mainstream Republicans against conservative challengers in immensely harmful primaries, is still ongoing.

"I don't see party switching on the part of members of Congress being imminent, or a crackup of the party system as being very likely," Karol says. "A lot of the sorting has already happened."

But that doesn't mean the process of radicalizing the party is complete. More lies ahead, and in a way, the fact that the inter-party polarization process is now largely complete is intensifying friction within the GOP.

"You can't do much more to reduce the overlap between the parties because it's pretty much gone," Karol says. "That mostly wasn't party switching by members. It was mostly turnover, and disproportionately because of Republicans. There's a lot of evidence that a successive wave of younger, newer Republicans is more conservative than their elders. And you don't see this going on in a Democratic caucus. White Southern Democrats became far less numerous. But you don't see in Ohio that the young Democrats are more liberal than the old Democrats."

For the GOP, that means the era of conservative spoilers isn't necessarily behind them -- conservative groups have a long list of targets for coming election cycles -- and for the country it means the polarization and vitriol in Congress will probably intensify.

You could call it the Cruz effect. Greater polarization, which in turn feeds toxic behavioral changes -- the ongoing breakdown in norms that for the better part of a century helped stabilize legislative governance in the country.

"Playing around with the debt limit, [a broken] confirmation process, no fraternizing with the enemy," Karol says, "these things would've been beyond the pale in the past."

Absent some kind of structural change on the right, it looks like they'll become the new normal. And as long as the GOP controls the House, the speaker will be struggling to tame a conference that in many ways resembles an unhappy coalition of two minority parties.