The Internet's next victim: Advertising

What the story of AdBlock Plus tells us: The online economy is broken, and won't be easy to fix 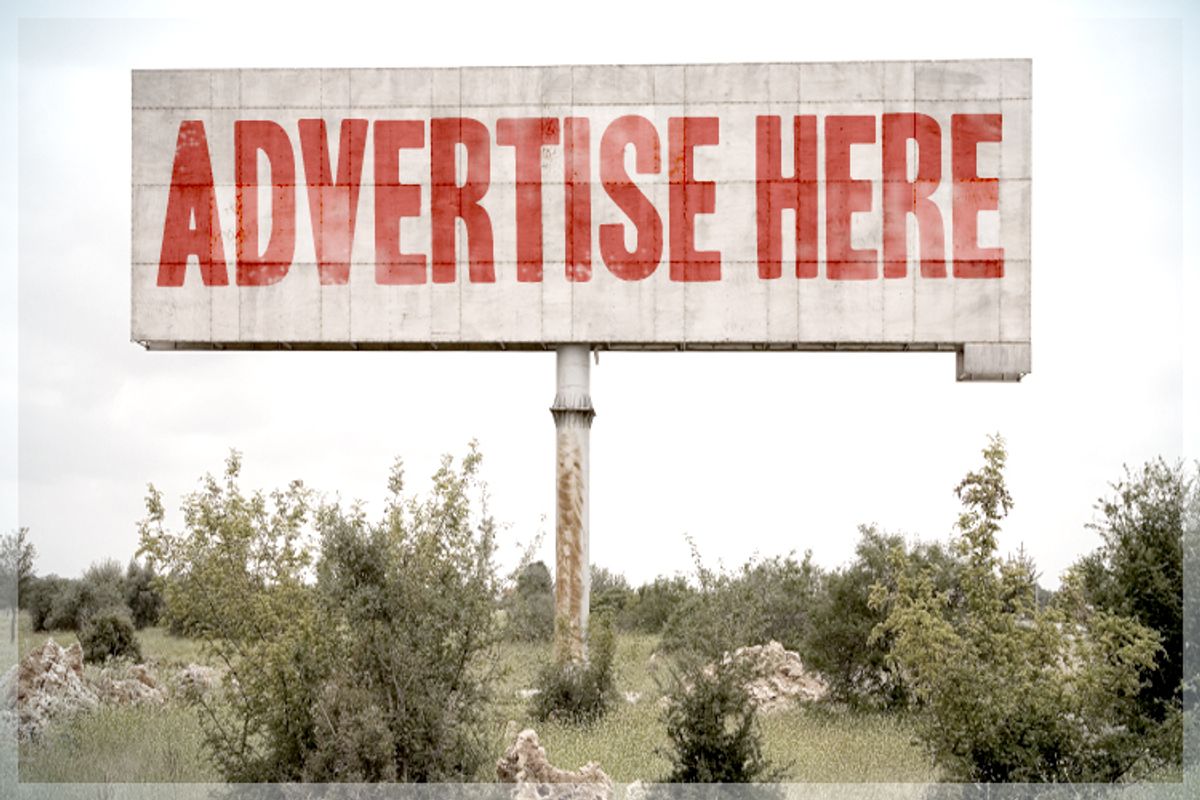 "Everyone agrees that advertising on the Internet is broken," says Till Faida, CEO of Adblock Plus, creator of by far the most popular ad-blocking software on the Web.

The soft-spoken German, visiting the San Francisco Bay Area to network and drum up support for his company's "Acceptable Ads" initiative, sketches out a distressing scenario: Ads aren't generating enough revenue, so websites are forced to run ever more "aggressive" ads -- a maddening deluge of pop-ups, blinking banners, and autoplaying video and audio commercials. But as ads steadily become even more annoying, users click even less, forcing revenues down even further.

"This is creating a vicious circle, which will at some point lead to the whole system collapsing," says Faida.

Faida believes he can help avoid that apocalyptic scenario. It might seem a little strange to hear that the CEO of a company whose main product is designed to quash ads is dedicated to the goal of saving advertising -- certainly, the owners of websites whose revenues are crimped by Adblock Plus users could be excused for looking askance. But Faida believes that he can leverage Adblock Plus' market power -- the company claims 50 million active users -- to create market incentives that force online advertisers to behave.

It's a bold claim, and when you look closely, there's a big catch. Because Adblock Plus' business model -- the way the company plans to generate a profit -- is to charge big advertisers a fee to not block some of their ads.

An ad-blocking company that cashes in by letting some ads through? Isn’t that, uh, false advertising?

But not all ads are bad, argues Faida. A veteran of online marketing who joined Adblock Plus in 2010, Faida makes the perfectly logical argument that the Web needs a healthy advertising industry to support its vast array of free services. And 80 percent of Adblock Plus’ users, claims Faida, have no objection to ads that aren’t obnoxious.

Left unanswered, however, is the question of whether a world full of “acceptable ads” is a world in which advertising actually pays the bills. Because "acceptable" doesn't just mean "not annoying." It also means "easy to ignore." And if advertising is easy to ignore, it doesn't work.

Adblock Plus' success, almost by definition, squeezes the advertising industry, and shines the spotlight on a now all-too-familiar question. The Internet has destroyed the traditional business model for a lot of industries. Is it set to destroy advertising, too?

Here’s how Adblock Plus’ “Acceptable Ads” program works. The Adblock Plus “community” flags new ads as completely beyond the pale or as acceptable. A group of 200 or so “open source” volunteers then builds Adblock Plus filters designed to block ads that fall into both categories. But for most small websites, blogs or news sites, the “acceptable” ads are “whitelisted” by default. That means, they’ll go right through. They won’t be blocked. (Any Adblock Plus user can flip a switch, says Faida, that blocks all ads, but only about 6 percent of users follow through and do so.)

"Large companies," says Faida, are held to a different standard. To pay for the cost of operating Adblock Plus for everyone, the company charges such companies a fee to participate in the “Acceptable Ads” program. If they pay the fee, their non-obtrusive, community-acceptable ads go through.

When I first learned of AdBlock Plus’ business model, I wrote a headline calling it a “pay-to-play” scheme. A P.R. person representing Adblock Plus named Mark Addison wrote me an email asking for a correction. I declined, largely because I couldn’t get a clear answer to my direct questions as to what would happen if a company such as Google refused to pay.

Several weeks later Addison told me that Faida was visiting the Bay Area and offered a chance for an in-person interview. But during the interview I had to ask the same question – what happens if the large companies don’t pay? – three separate times before I got a straight answer: If a company doesn’t pay, then all their ads are blocked by default.

So if Google fails to pony up, all of the ads that support Google’s services –- including text ads and sponsored search result ads that Adblock Plus users have already decided are acceptable -- are blocked.

Faida and Addison portrayed the business model as an exercise in fairness. For the little guys to get their acceptable ads whitelisted automatically, those who could “afford to pay” must contribute.

But it still sounds to me like something that bears more than a passing resemblance to a protection racket. Pay up, or we’ll break your windows! Pay up, or millions of Adblock Plus users will never see any of your ads.

Faida is not shy about the club that Adblock Plus wields.

“I think we have come to a point where we have so many users,” says Faida, “that blocking all ads would be destructive to the Internet.”

At first glance, Faida’s boast sounds like unmitigated hubris. One tiny German company has the power to upend the entire Internet economy? But Google acknowledged to me that it has agreed to pay the required participation fee. When the biggest company in the Internet advertising economy concedes that it is paying to get its ads whitelisted on Adblock Plus, it’s worth taking notice.

Whether one considers Adblock Plus's business model extortion or simply canny deal-making -- in fact, whether or not one considers ad-blocking itself to be outright theft -- the bottom line is that ad-blockers appear to be making a real difference.

A report released this week by PageFair that looked at 220 different websites said that 22.7 percent of visitors to those sites were using ad-blocking software. PageFair, according to the New York Times, makes money by helping companies get around ad-blocking, so it has a dog in this fight, but there's no question that the advertising industry takes a very dim view of Adblock Plus -- or any other independent party that tries to help Web users defend themselves from advertisers..

In July, Randall Rothenberg, CEO of the Interactive Advertising Bureau, published a screed titled ”Has Mozilla Lost Its Values?” in which he cited Mozilla’s role as “the world’s largest distributor of Adblock Plus” as evidence that the Firefox browser developer’s “civic positioning and public character are heavily freighted with antipathy toward advertising and the commercial Internet.”

Like the piracy of music and movies online, ad blocking appears to be a victimless endeavor, but in fact is a possibly illegal activity that deprives a cascading chain of legitimate enterprises of income. In some markets, Adblock Plus is responsible for stopping as much as 50 percent of mainstream publishers’ ads, significantly harming their revenue stream. For small publishers, the effect is devastating.

If we judge people by their enemies, Adblock Plus scores high. The IAB is an implacable foe of any effort to put limits on online advertising or restrict the ability of advertisers to track the online movements of Web users. To most technologically savvy Web users, Rothenberg’s complaints about AdBlock Plus are the best possible endorsement Faida could wish for. (By press time, Rothenberg had not answered questions sent to him by Salon.)

But for the IAB, Mozilla’s support of the Adblock Plus browser extension isn't the biggest gripe. Web filters that quash pop-up ads are a minor irritation compared to the threat posed by Mozilla's plan, announced earlier this spring, to release a version of Firefox that automatically blocked all cookies placed by third parties onto the computers of browser users.

Third-party cookie placement enables online tracking. The notion that one of the biggest browser developers could completely cut out the middlemen that help advertisers develop detailed portraits of online Web user behavior strikes directly at the heart of the evolving Internet advertising model. This summer, the advertising industry got so angry at Mozilla that in mid-August, the Digital Advertising Alliance took out full page ads in trade press papers alleging that Mozilla was "hijacking the Internet."

Finding stuff you’re interested in on the Internet is easy these days. That’s because advertisers can tailor ads to speciﬁc interests through the responsible and transparent use of cookies.

But Mozilla wants to eliminate the same cookies that enable advertisers to reach the right audience, with the right message, at the right time. Mozilla claims it’s in the interest of privacy. Truth is, we believe it’s about helping some business models gain a marketplace advantage and reducing competition. Right now consumers have control over whether they receive interest-based ads through the Digital Advertising Alliance’s self-regulatory program.

It appears that Mozilla wants to be “judge and jury” for business models on the Net.

I asked the Digital Advertising Alliance if they could be more specific about exactly which “business models” would gain a “marketplace advantage” through Mozilla’s actions. I received no answer. I asked Mozilla whether the fierce industry backlash to the plan to enable third-party cookie blocking by default had influenced their decision to back off that move and replace it with a “Cookie Clearinghouse” that would let browsers transparently manage lists of what parties would be permitted to set cookies and who would be blocked. Mozilla also declined to comment.

Apparently, the fight over advertising on the Internet is a sensitive issue!

But that makes sense. Because the backdrop to the struggle over third-party cookie blocking and ad-blocking is troubling: The fierceness of the rhetoric is a sign that the entire economic basis of our free-service-on-the-Internet economy is fundamentally unstable. People don't like ads, new technology makes it easy to avoid them, and as a consequence, it's very difficult to make advertising-dependent business models work.

Even Google, by far the biggest player in online advertising, is aware of this. Want to understand why Google is willing to pay Adblock Plus to participate in the Acceptable Ads program? Here is a potential answer: The prices paid by advertisers for online impressions and click-throughs has been falling more or less steadily for two years. In that kind of environment, maybe you can't afford not to get in bed with Adblock Plus!

Perhaps. Google wouldn't give me more than a one-line statement to acknowledge its participation in Adblock Plus. And it's not clear how many "large companies" are paid up members of the Acceptable Ad program. Faida would only tell me that the total number is "less than 20."

It's also not clear that the battle over ad-blocking on the open Web is where the future of online advertising will be decided. Right now, all those precious eyeballs are rapidly moving to the mobile environment, followed closely by a rising percentage of advertising dollars.

In theory, the app-centric mobile world offers a much friendlier, more controllable environment for advertisers. In the constant technodialectic playing out between advertisers and ad-blockers, the more constrained environment of smartphones and tablets offers some hope that advertisers can regain ground lost to the ad-blockers. But their advantage is hardly clear-cut: It's also a lot harder to advertise on the smallest screens.

Google may be willing to pay to participate in Adblock Plus's Acceptable Ads program, but its real feeling about ad-blockers was made clear in March, when the company banned Adblock Plus from the Google Play store.

Oh, and you can't find Adblock Plus in Apple's App Store either. Which raises the question: Who is really hijacking the Internet? Anti-ad technologies, or the smartphone?