Black Twitter's not just a group -- it's a movement 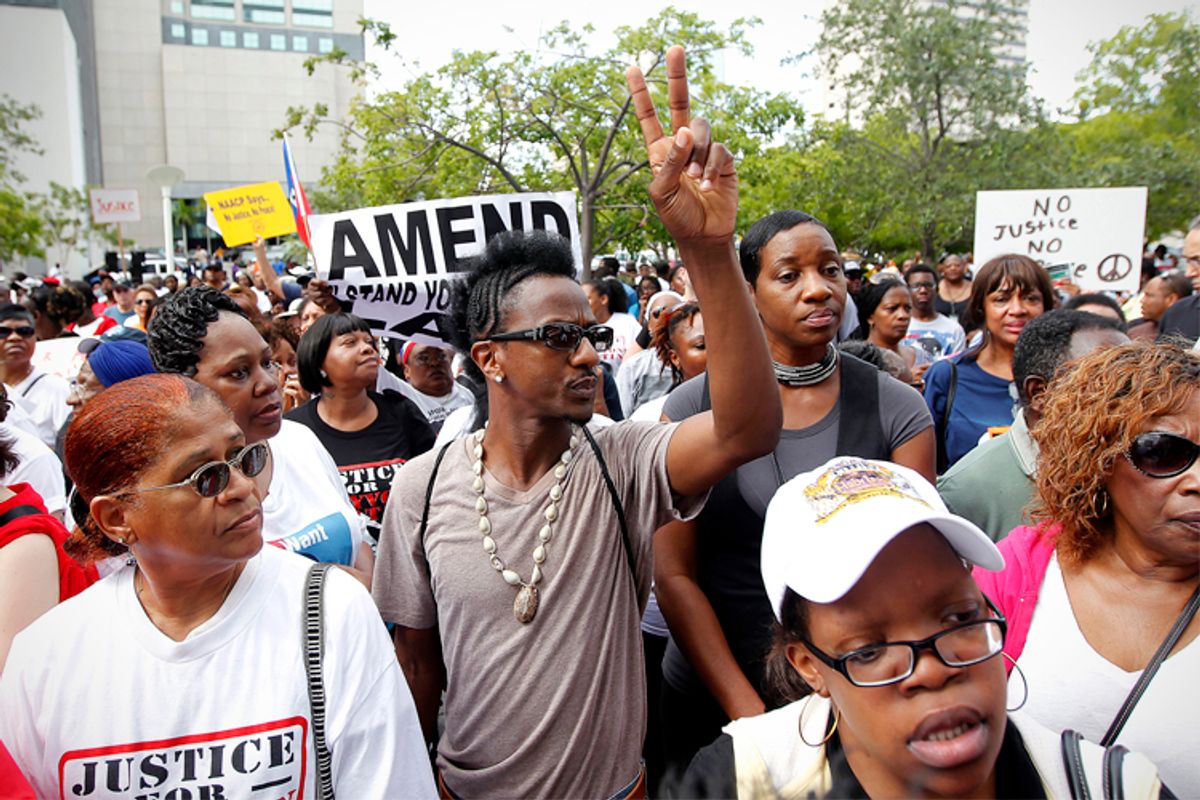 Protestors at a rally for Tracy Martin in Miami, Florida (Reuters/Andrew Innerarity)
--

I was recently at a party in Lower Manhattan with a group of coworkers. We were just having a few drinks -- nothing terribly debauched. However, a friend of mine made one throwaway comment that gave me pause.

During a rather mild discussion regarding the power of Black Twitter, said friend (we’ll call him Nate) asked, in endearingly brash fashion, “So is there any chance I can join?” Now, to be clear, I’m black. Nate, the poor guy, happens to be white. This being friendly company, I didn’t take the remark as a slight. I understand that I could have, fully prepared to give him a lecture about how his joking tone might lead me to believe he has some preconceived notion about blackness that reduces my experience down to one that jibes with stereotypes. I get it. It was said in the same way one might say, “Do you think I’m down?”

Nate’s down-ness aside, I found I didn’t have an answer for him -- and that troubled me. Since then, I’ve come to believe that Black Twitter, for all the real good it does for our online discourse on race, is a slippery idea. Any discussion of Black Twitter also brings up our complex and often contradictory notions of black culture. I can’t pretend to have the keys to that gated community, either. But Black Twitter as a force for good, thoughtful discourse -- as a burgeoning movement -- is something I would happily have him join. We all should.

Discussions about Black Twitter often begin with Farhad Manjoo’s oft-ballyhooed 2010 Slate thinkpiece “How Black People Use Twitter.” Its simple thesis was that black people just seem to use Twitter differently, which Manjoo supported with hashtags he found at the time (one telling example being #ifsantawasblack). The piece was controversial because, while it attempted to parse out how and why black people tweet using verifiable data and thoughts from notable black figures, it generalized in the extreme.

Put simply, black people are not a monolith.

However, prevailing ideas about contemporary black culture and, indeed, Black Twitter seem to defy any ideal of plurality we as a group might have. The problem arises with the question, “What is black culture?” Black culture, more than referring generally to any state of otherness we as a group must negotiate, is much more often about certain experiences that we own as black experiences. Those experiences, whether they include facing institutionalized discrimination or playing the dozens or being among the 25.8 percent of African Americans living in poverty, are broad and important but give us a fixed concept of blackness. This fixity is problematic because it implies an ownership of culture that doesn’t apply to everyone. User Huxtablesweater on Jezebel’s Groupthink forum summed up the issue in this way:

Is black culture anything created by a black person, regardless of how that person identifies? Then is skin color is the primary driver? Who is the arbiter of blackness? Is blackness a function of skin tone, genetics, or frame of mind? How does blackness intersect with gender and sexuality? Does it intersect? Can you be mixed and still get coverage under blackness? How about if you’re a quarter black? An eighth? A sixteenth? Miley Cyrus?

The same applies to Black Twitter. If I’m black, am I automatically a member of Black Twitter? Is it subject matter or skin color that matters here? If it’s subject matter, will all my tweets pass muster? Are Black Twitter tweets judged on a tweet-by-tweet basis or in aggregate? Is my membership forfeit if I grew up around white people? If I don’t watch BET? If I missed the #BlackBuzzFeed hashtag because I was watching "Game of Thrones"? Do all my tweets have to conform to the Black Twitter mission statement? Is there one?

While black culture as an idea is consistently and effectively being expanded upon, Black Twitter is still often understood as a fixed concept. Much of the media attention surrounding it paints it -- like the black culture it seemingly represents -- as an exclusive club; the coverage lacks the nuance to break down the designation beyond saying “What Black people say and do on Twitter.” In that way, mainstream outlets haven’t gotten much further than Manjoo’s limited take on the subject. As Jonathan Pitts-Wiley warned in that same piece:

For people who aren't on the inside, it's sort of an inside look at a slice of the black American modes of thought. I want to be particular about that—it's just a slice of it. Unfortunately, it may be a slice that confirms what many people already think they know about black culture.

In effect, Black Twitter leaves lots of black folks out.

However, when you look up Black Twitter on Wikipedia, you find a somewhat different (and I feel crucial) take. According to this definition, Black Twitter is a cultural identity on Twitter focused on issues of interest to the black community, particularly in the United States. That the definition points to Black Twitter having an activist purpose sets it apart from the fuzzier view that more or less holds sway. It becomes less about so-called black tweets, and more about black people in America tweeting towards a unified end. Matters have necessarily started to shift from a detached, myopic survey of a single group of people to a movement.

We saw as much after the Trayvon Martin ruling, when Feminista Jones identified Twitter as the underground railroad of activism. We saw as much more recently in the wake of Hugo Schwyzer’s public breakdown, and Mikki Kendall’s creation of the #SolidarityIsForWhiteWomen hashtag. And were it not for people of color speaking up, Fast Company’s list of the 25 smartest women on Twitter would continue to look rather monochromatic.

This definition is so vital because it allows us to move away from an idea of Black Twitter as a place on the internet whose borders are hard to discern to an ethos whose concerns affect everyone. This view includes all people willing to engage effectively with the issues the movement’s thinkers are tackling. After all, it’s not just about black people. These issues affect all groups who are marginalized because of race, gender, or class. We must, of course, never discount the cultural dialogue taking place between people of color at large. Understanding how different groups of people navigate Twitter is important and necessary, especially as we take more of our lives into the digital world. But we can and should move away from attempting to define how an entire race of people tweets and towards recognizing how a smaller group of people with a cause is affecting how Twitter is understood.

If Nate asked me if he could join, I’d only tell him to pay attention. And tweet accordingly.

Kwame Opam is a tech writer based in New York City. You can follow him on Twitter @kwameopam.