Conductor: "A cute girl on a podium means that musicians think about other things" 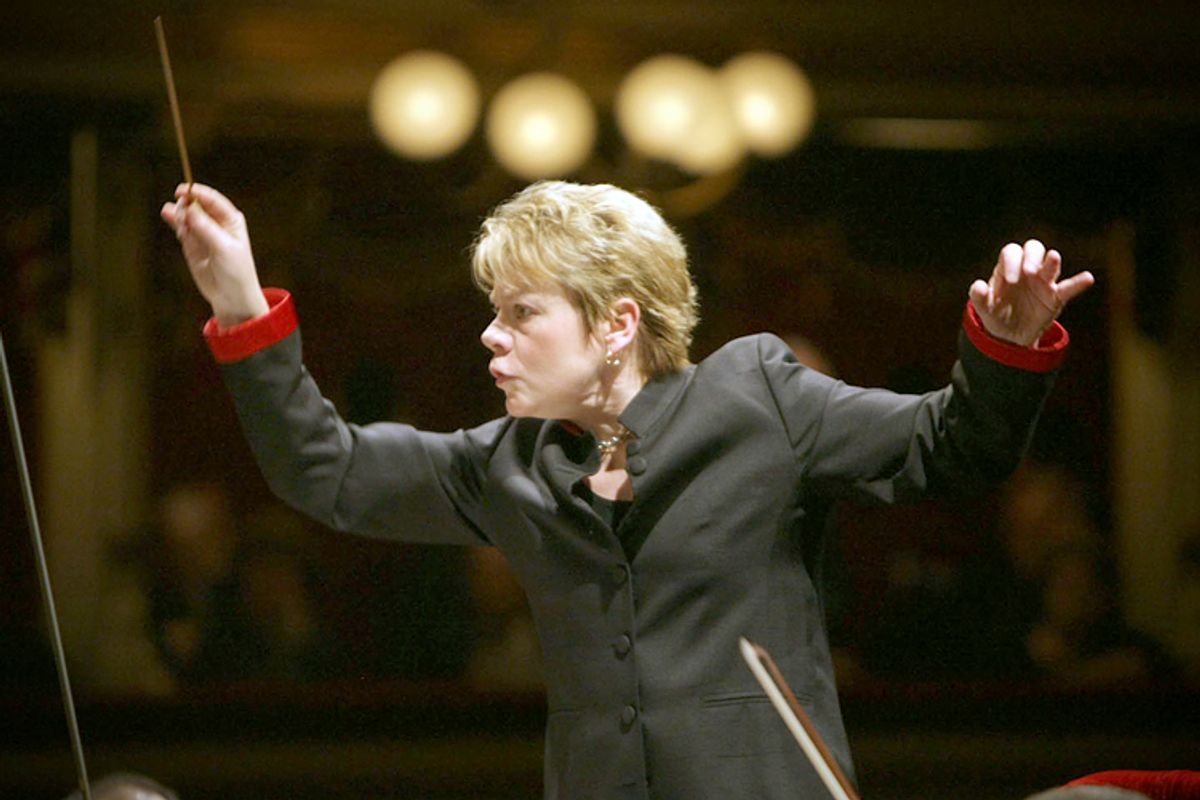 Of the many, many professions that suffer from a surfeit of dumb sexism, today let us add orchestra conducting.

Vasily Petrenko, the principal conductor of the National Youth Orchestra of Great Britain and the Royal Liverpool Philharmonic, had some strong opinions this week about Marin Alsop's forthcoming history-making performance as the first woman ever to conduct London's esteemed Last Night of the Proms concert. In a conversation with the Norwegian paper Aftenposten, Petrenko mansplained that orchestras "react better when they have a man in front of them" because "a cute girl on a podium means that musicians think about other things." With great scientific authority, he added, "Musicians have often less sexual energy and can focus more on the music," and "When women have families, it becomes difficult to be as dedicated as is demanded in the business."

It's a weird rant, to say the least. As backward arguments against women's advancements go, it doesn't even make sense. Did Petrenko, who ostensibly works with musicians all the time, forget that orchestras are made up of men and women, gay and straight people? Or did he think that the mere presence of a female, any female, has the same disabling effect on everyone she stands before? Petrenko didn't do much to unmuddy his statements when he issued a clarification on the Oslo Philharmonic Web site, explaining, "What I said was meant to be a description of the situation in Russia, my homeland. This situation is worsening with some new initiatives of the government. I deeply respect that many musicians, for example the famous violinist Gidon Kremer, feels the same way about the situation there." The outspoken Gidon Kremer certainly doesn't seem any opponent of female advancement – this summer he announced an October Berlin concert "in support of the innocent victims of violence and human rights violations in Russia," including the members of Pussy Riot.

Petrenko went on to say, "Taken out of context I understand that what I said can very easily be perceived in the wrong way. I have the outmost respect for female conductors, for instance the extraordinary talented conductor Marin Alsop and the famous Veronika Dudarova. I'd encourage any girl to study conducting. How successful they turn out to be depends on their talent and their work, definitely not their gender. I also want to add that my beloved wife is a choral conductor."

So were his remarks just a case of something lost in translation – the thoughts of a Russian, speaking to the Norwegian press, misinterpreted by the British one? Was he commenting on sexism -- or simply perpetuating it? It's hard to say, though it's worth noting that even within the same newspaper on the same day, Petrenko's "cute girl" comment has also been interpreted as "sweet girl." Regardless, however, it's certainly safe to say that speculating on the sexual "energy" of musicians and the relative sweetness or cuteness of the individual leading in front of the orchestra is wildly inappropriate at best.

The world of conducting is still largely a men's club. This past summer, Tara Simoncic, current associate conductor of the Greenwich symphony, did a reader Q&A for the Guardian, in which she fielded questions on the "phallocentric mystique" of the baton and admitted, "Yes, I have experienced sexism." She added, "I look forward to the day when it won't be highlighted that I am a female conductor ... I think it is an issue at every job for every woman at some point in their lives." Last week, I was on Cape Cod, where I learned that actress Blythe Danner had recently conducted a Pops by the Sea concert in Hyannis. And I realized I have never seen a woman conduct. And just Tuesday, Marin Alsop herself wrote about her Last Night of the Proms gig, saying, "I’m conscious that for many people this has real resonance as a 'glass ceiling'-breaking moment," and expressing her hope that the performance "will also give people pause for thought about our assumptions concerning women and our ever changing roles across the world. The fact that there can still be firsts for women in 2013 is what should really grab our collective attention!"

Whether Petrenko's comments were sincere or just sincerely mangled, they represent very real attitudes and objections that working women face. The Vienna Philharmonic only started including females, for example, in 1997, and it currently has only six. And perhaps the seemingly privileged realm of classical music doesn't seem like much of a feminist battleground, but it's just one small field in a world in which women's gains are so very hard-won, so consistently. And while we can disdain the crudely rendered remarks of one conductor, it's ultimately more fruitful to heed the words of another. We can listen not to Petrenko but to Alsop when she says, "We must never fall into the trap of getting complacent about things getting better for all women because they simply are not. When a girl can be shot in Pakistan for going to school, when women are arrested after being raped in Saudi Arabia and when the number of rapes in African war zones reaches numbers that are impossible to calculate, we need to keep busy fighting injustice wherever it occurs." We need to stay vigilant. We need to keep fighting. Because in the end, if you want to make the world a better place, it all comes down to how we conduct ourselves.